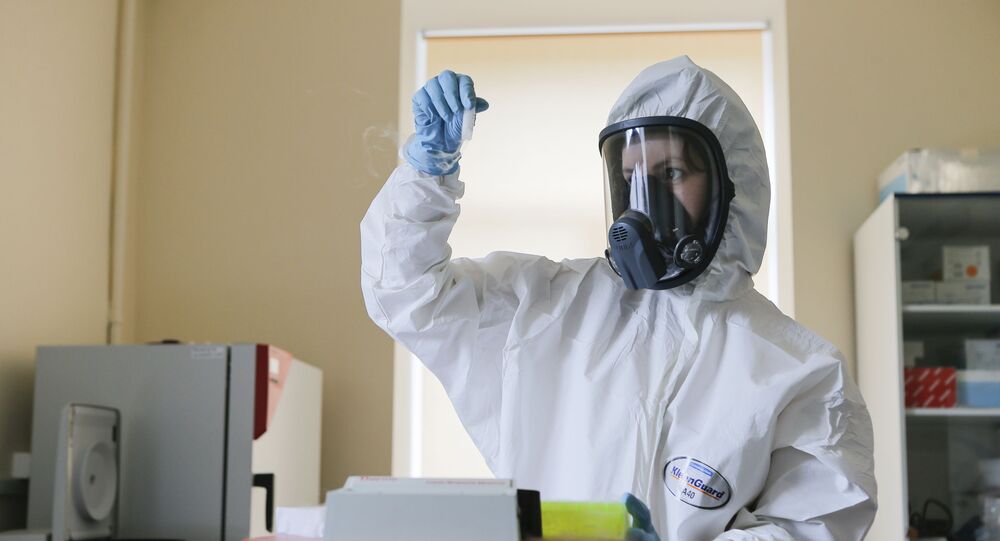 On 11 August, Russia announced the world's first vaccine for COVID-19, named 'Sputnik V', in a bid to curb the pandemic that has currently killed over 737,000 globally. International observers detail why the breakthrough development has been met with either silence or rejection from the Western press.

Developed by the Gamaleya Research Institute of Epidemiology and Microbiology, the Russian anti-coronavirus vaccine has undergone a series of trials launched on 18 June 2020, and has proved to be efficient.

Instead of a sense of relief, the announcement - made by President Vladimir Putin on Tuesday - prompted annoyance and skepticism in the Western mainstream media: "Moscow is cutting corners on testing to score political and propaganda points", The New York Times claims. The Wall Street Journal expressed concern over the "safety" and "efficacy" of the Russian vaccine, while The Guardian alleged that "Sputnik V’s development has been marked by worrying opacity and ethical issues".

"This reaction may be characterised as a case of 'sour grapes' - meaning a combination of envy and embarrassment that Russia has proven itself far bolder than the global, especially US and European competitors, in addressing directly the threat of the virus to human health and to the economy, while wasting no time", opined Gilbert Doctorow, an independent Brussels-based political analyst.

According to Doctorow, many of the skeptics are more generally Russia-bashers and detractors, as they know little about the country and have no idea about Russia's scientific community and its achievements over the past decade, precisely in the area of immunology and combating infectious diseases.

Guy Mettan, a Swiss politician and the executive director of the Geneva Press Club, is not confused by the outburst from the Western mainstream press:

"The reason for such a truncated approach is a consequence of the deep-rooted Russophobic prejudices and clichés concerning Russia which are growing since around a decade," Mettan notes. "Writing bad and negative news about Russia has become so common that lots of journalists cannot imagine to change the stance and are convinced that if Russia makes someting good, it would be necessarily a fake."

Earlier, Russia came on US and European mainstream media radar due to a relatively modest number of COVID-related deaths, despite that a number of countries around the world boasted even lower fatality rates from the coronavirus.

Given the current climate in Western views of Russia, it's not surprising that the vaccine is immediately rejected before its results are known, admits Joe Lauria, editor-in-chief of Consortiumnews. "It's a knee-jerk reaction, though there is reason for measured scientific skepticism as vaccines usually take years to develop", he opines.

Russian scientists provide a clear explanation for the mind-boggling speed of the new vaccine development: the crux of the matter is that it was made on the base of previous research.

Since the 1980s, the Gamaleya Centre has been developing a technological platform using adenoviruses found in human adenoids and normally transmitting the common cold, as vehicles, or 'vectors', which could carry a genetic material from another virus into a cell.

"These are large viruses and vectors – the entire pathogenic part was removed from them and the spike gene was inserted there", says Pavel Volchkov, head of the laboratory of genomic engineering at Moscow Institute of Physics and Technology. "They made a two-part vaccine. They use a single virus to initiate immunisation".

This method was used to create the vaccine against the deadly Ebola virus in 2015. Russian researchers carried out a great deal of study on the selection of required doses as well as on the side effects of the two-vector vaccine. The anti-Ebola preventive has been used on several thousand people over the last few years, creating a proven platform that was instrumentalised for the development of the COVID-19 vaccine.

"This large amount of work, previously done in recent years, allowed the developers not to waste time on all these optimisation experiments, but rather quickly switch to the production of the necessary vaccine [against COVID-19] in the already selected dose, and they did it quite quickly", explains Volchkov, in addressing those skeptical about the speed of the development of Sputnik V and its efficacy.

© REUTERS / Anton Vaganov
A scientist prepares samples during the research and development of a vaccine against the coronavirus disease (COVID-19) at a laboratory of BIOCAD biotechnology company in Saint Petersburg, Russia June 11, 2020

Another factor is the huge competition between firms and countries to be the first to propose an efficient vaccine, Mettan points out: "As many Western countries, including the US, have very badly managed the COVID-19 pandemic, it will be hard for them to admit that they have also failed to produce an appropriate vaccine!"

Ignoring Russia's registration of the world's first anti-coronavirus vaccine and focusing the attention of the public only on the eventual advances of the vaccines promoted by Western companies is also a usual bias used by Western media in the coverage of events concerning Russia, according to Mettan.

Touching upon the unfolding competition, Doctorow wondered whether it matters more in the eyes of Western policymakers and media pundits than human health and well-being amid the deadly pandemic.

The Russian decision to roll out the much-anticipated vaccine deserves applause rather than jeers in the Western press today, highlights Doctorow, who bemoans the fact that, much in the same vein, "no EU member state country has sought to procure quantities of the proven Russian medicines for treating early COVID-19 infections Avifavir or the drug they have brought to market for late stages of the disease which are life threatening".

"In the midst of this pandemic, time is of the essence", he stresses. "So the real question today is do you have the confidence and boldness to proceed with immunization and do what you can to curb the virus's propagation while it is presenting a deadly threat to our societies?"