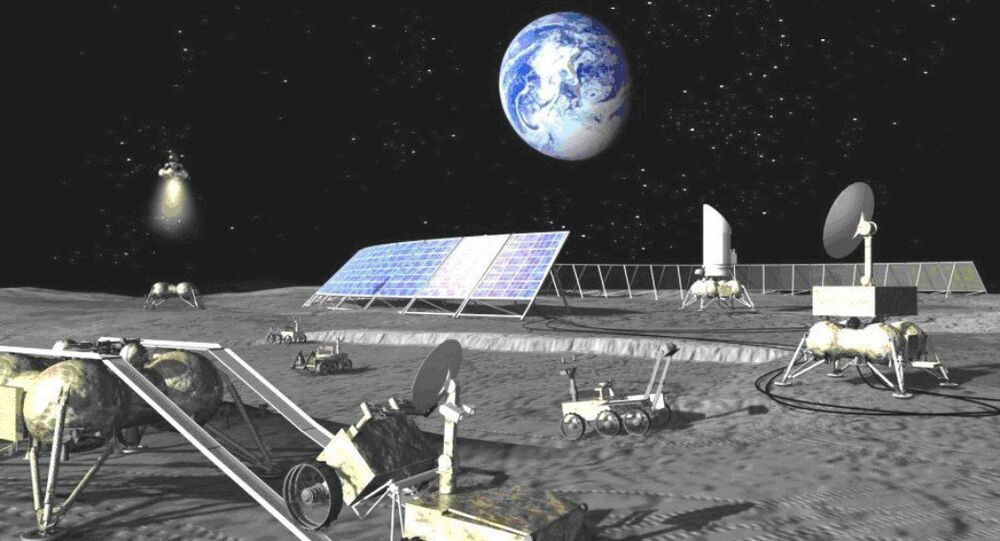 Russia's State Corporation for Space Activities (Roscosmos) envisions launching a manned flight to the Moon by 2030, according the agency's chief, Dmitriy Rogozin, who recently named China as the most likely partner for Russia to create a brand new base on the Earth's natural satellite.

The US, which has been developing its own ambitious Artemis project, is eyeing the unfolding Sino-Russian lunar collaboration with skepticism and apparent displeasure: "Rogozin would prefer that Russia join with China as a space partner. For a variety of reasons, the move would seem to be crazy from the point of view of Russia’s national interests", The Hill claimed on 19 July. Earlier, on 5 May, Reuters reported that despite longstanding Russo-American cooperation on the ISS, the Artemis Accords do not include Russia "as an early partner".

"The US has a nasty habit of declaring what other countries' national interests 'should be', that suspiciously always dovetail with their own", remarks Mark Sleboda, a US military veteran and international affairs and security analyst. "Sino-Russian cooperation in space is natural, logical, and extremely beneficial to Russia's national interests".

The Hill's op-ed came on the heels of Rogozin dubbing the Artemis endeavour "more of a political project for the US".

"With the lunar project, we are seeing our US partners move away from the principles of cooperation and mutual support that have developed with cooperation on the International Space Station", the Roscosmos chief told Russian newspaper Komsomolskaya Pravda on 15 July. "They see their program not as international but as similar to NATO. Here is the US, and the rest 'must assist it and pay to it'. We are not very interested in participating in such a project".

The NASA-led Artemis programme was initially kicked off by the Trump administration in 2017 with the goal of landing "the first woman and the next man" on the Moon by 2024 as well as commercial lunar mining. To this end the Trump administration drafted an international agreement providing the participants with the "rights" for exploration of the natural satellite's resources.

"The so-called 'Artemis Accords', which would have served as a fig leaf of 'legal justification" for the Artemis program, present a greater potential danger to the future of humanity in space if they are picked up by future US presidential administrations", Sleboda opines. "Whatever the rhetorical protestations to the contrary, the [accords] clearly lay a blueprint for territorial claims on the Moon under the auspices of 'safety zones' and 'exploration rights'".

The agreement paves the way for de facto "colonization" and "privatization" of the natural resources of the moon which contradicts the spirit of the 1967 Outer Space Treaty (of which the US is a signatory), he warns.

Still, according to Sleboda, the Artemis programme itself "is yet another one of those grandiose Trumpian plans, much like his 'Wall', with little to no chance of success, in no small part due to partisan political warfare inside the halls of Washington and financial restraints".

To fund its great moon adventure the White House would have to slash the budgets of numerous existing Democrat-supported programs including STEM education and climate change monitoring.

"Congressional Democrats have responded in kind by freezing NASA spending in the 2021 budget and earmarked just a fraction of the funding, reportedly just $628 million of the requested and needed $3.4 billion spending, for Artemis in its first year", the analyst notes.

© REUTERS / Damir Sagolj
Volunteers smile from inside a simulated space cabin in which they temporarily live as a part of the scientistic Lunar Palace 365 Project, at Beihang University in Beijing, China July 9, 2017.

Why Russia and China are Natural Allies in Space

While the US-Russian lunar collaboration is still under deliberation, "there is every potential for Sino-Russian cooperation in space to be both very successful and very beneficial to both countries", according to Sleboda.

"Russia and China currently are at the highest level of relations and cooperation that they have historically enjoyed - politically, geopolitically, economically, and in scientific-technical areas", he observes.

In addition to continuous cooperation with the US, EU and other countries in the sphere of space research, Russia embarked on outer space collaboration with the People's Republic three years ago. In 2017, Moscow and Beijing signed a milestone agreement envisaging lunar and deep space exploration, satellites and their applications, earth remote sensing and space debris research – to name just a few areas – from 2018 to 2022.

"In terms of space research and exploration, Russia and China complement each other very well", Sleboda deems:

·         on the one hand, "Russia has a long history of space achievements, experience, space technology, and technical expertise";

·         on the other hand, China, which is "a relative new-comer to space with a still-developing space industry and institutions", has "a surfeit of political will and capital to invest in such ventures".

In addition to giving a boost to the countries' technological and economic  development, the Russo-Chinese space collaboration could counter the US attempts to isolate the People's Republic and upend its high-tech rise outlined in Xi Jinping's “Made in China 2025” (MIC25) strategy.

"The scientific-technical cooperation of Russia and China in space research and development will undoubtedly have spin-offs, applications, and uses and pay dividends in other spheres - more generally economically and militarily. The two are thus stronger together, technologically as well", Sleboda stresses.

The countries' mutual rapprochement is not surprising: the US decision to tear apart longstanding arms control deals, as well as trade restrictions, sanctions policy and multi-dimensional pressure exerted on both Beijing and Moscow is driving the two closer to each other, according to the analyst.

"The US now believes fully in the perpetuation of the unipolar world of primacy that developed after the dissolution of the Soviet Union", the US military veteran highlights. "It is the US that has unilaterally initiated decoupling with Russia on both arms control and space cooperation, thus sparking a new intertwined arms Race and space Race. Russia needed a new partner for both security and scientific cooperation. China was the obvious choice".

However, what is more troubling is Washington's incentive to "militarise" the cosmos by creating the US Space Force (USSF), the new warfare service branch of the US Armed Forces, as well as the development of anti-satellite weapons, according to the analyst. While announcing the establishment of the new Pentagon unit in June 2018, Donald Trump specifically underlined the need to "have American dominance in space".

"What happens on Earth will increasingly be spread to and continued in space", Sleboda warns. "Military thinkers conceive of space, and the Moon more locally, as the ultimate strategic high ground. The militarisation of space has already been underway for almost two decades".

The security analyst foresees that if current geopolitical trends continue, "then it is almost certain that a 'race' for the Moon, Mars, the asteroid belt, and beyond will develop between US-led Western hegemony and a Sino-Russian alliance in space in the coming decades".