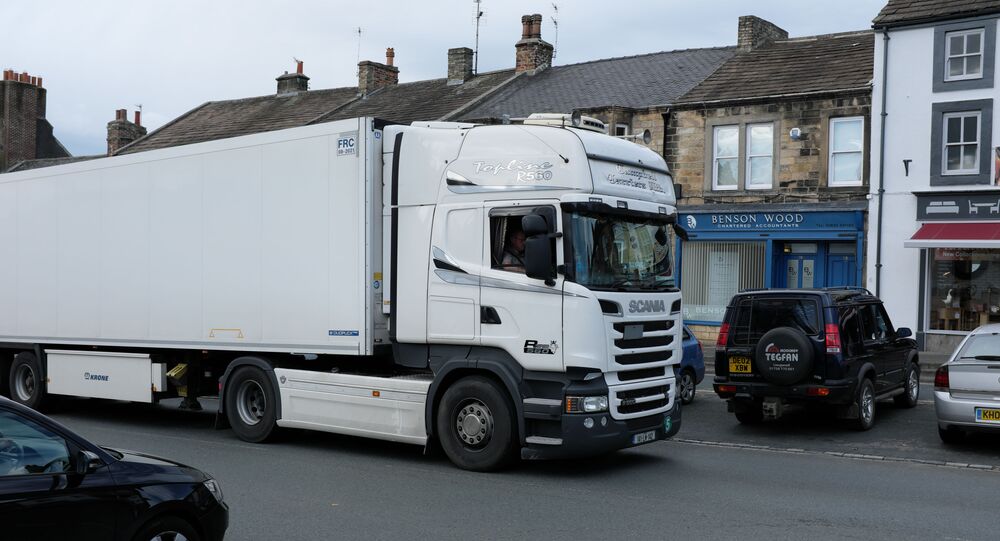 A leaked document from Her Majesty’s Revenue and Customs has stated that lorries will only be able to move goods across the border if they have the correct reference from the Goods Vehicle Movement Service.

Lorry drivers will be required to file the relevant customs paperwork electronically to receive the correct approval, but the government could ban trucks who don't have the correct clearance from reaching ports.

With more on this story, Sputnik spoke to the Political Commentator Brian Silvester in this interview.

Sputnik: What does this represent in your eyes, Brian? Is this something that we should expect from the EU going forwards?

Brian Silvester: Most people in this country don't realise what's really happening with Brexit and the reason for that is the legacy media, like the BBC, don't tell the truth about what's going on and it's a good job we've got stations like Sputnik to get the truth out to people.

What's really going on here is that Boris Johnson has signed us up to stay in the EU in all but name, in name only we're leaving, but in every other aspect we're going to be still under the control of the EU dictators and that is what Boris has done.

He's done the opposite of what he promised to do. Now we're in a situation that we're going to see not the Brexit that we voted for which the 17.4 million voted for, but for the BRINO - Brexit in name only - that Boris has brought upon us.

Sputnik: Will UK businesses be restricted in trading with the EU going forwards or is this more scaremongering from the media?

Brian Silvester: Again, I think that what people have got to realise is that we're not really leaving the EU and we're still going to be under the control of the EU because Boris Johnson has actually betrayed the 17.4 million who actually voted to leave.

What is happening now is just theatre, it's just all playing to the gallery and I'll tell you what will happen. What will happen is later in the year, there will be no agreement and according to what Boris has signed up to, and don't forget what you signed up to.

© REUTERS / Handout .
Pro-Brexit Think Tank Pushes Johnson to Pursue Trade With Asian 'Democracies', not China and EU
Sputnik: What would you like to see from Boris and his government going forwards?

Brian Silvester: I'd like him to go for a no-deal agreement. That will be by far the best agreement. That means we will be totally free from the EU and we'll be free to make our own trade deals and do what we have always done as a country before we join the EU as a free independent nation-state but I'm afraid because of what Boris signed is up to that that is no longer able to for us to do because it because he is given that away, which most people don't understand.

He signed away our freedom and has signed up to documents now, which means we will say under the control of the EU.