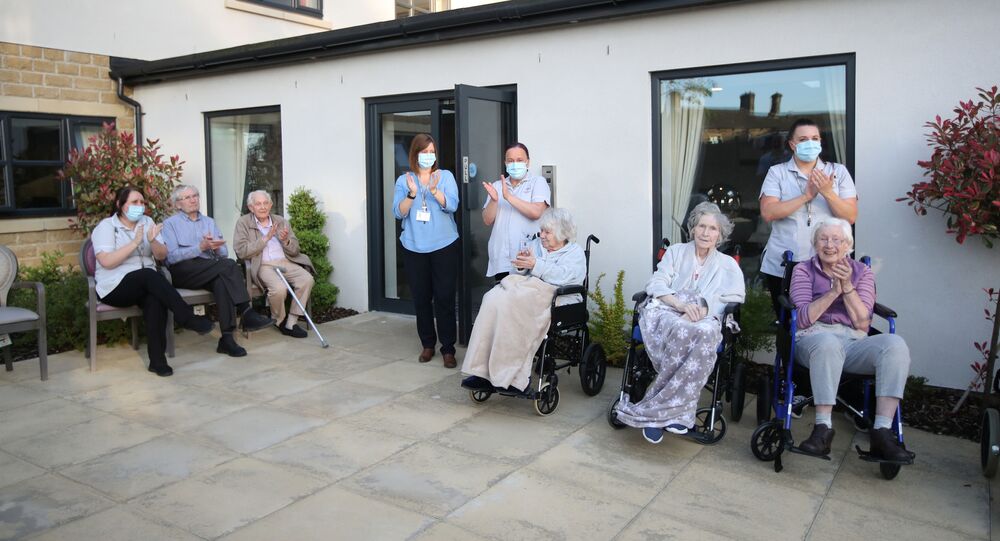 The UK government's efforts to shield elderly Britons from the coronavirus were apparently too little and too late, as 16,000 residents of care and nursing homes had died by the end of May. Aled Rees, manager at Erwhir Care Home in Wales, has explained how his residents and staff are weathering the pandemic.

The risk posed by the coronavirus to British care and nursing homes is nowhere near over as the country has started easing the COVID-19 quarantine measures.

Provisional figures on COVID-related deaths within the care sector in England and Wales indicated that between 2 March and 1 May, 72.2% of fatalities occurred within care homes, and 27.5% occurred within hospitals. In general, the coronavirus has caused 27.3% of all deaths of care home residents, according to the Office for National Statistics' mid-May report.

One of the reasons behind the devastating impact of COVID-19 in the UK's care homes was the lack of testing among asymptomatic residents and staff, as Sam Monaghan, chief executive of Methodist Homes (MHA), argued, as quoted by the British press.

While Monaghan calls for whole-home weekly tests, there is no guarantee that they would save the day, deems Aled Rees, manager at Erwhir Care Home in Wales in the UK.

"I certainly consider it very important for testing, if the test tells us who has had, who has it and who is clear", Rees says. "Those tests, however, give us the state of play for that exact time. A lot can happen within a week and staff could contract it in the meantime. The tests would not help avoid someone coming into work with it in between testing".

According to him, Erwhir Care Home is giving the details of staff and residents to prepare testing within the very near future. "This is of course in Wales and we do work in a slightly different way to England", the manager remarks.

The Welsh authorities had long been reluctant to embrace whole-home testing and provided tests only to individuals with symptoms. As criticism started to mount, the Welsh government opted to follow in the footsteps of England, which had been testing asymptomatic residents and staff since the end of April, and extended the policy for care homes with more than 50 beds in early May.

Gov't & Health Agencies 'Turned up Late to the Party'

When asked whether he feels any support from the government, the Erwhir Care Home manager admitted that from the point that local, regional, and national authorities and governments have become involved, there has been plenty of support.

"On saying this, personally, I found it a bit of a cheek since we were ready weeks ahead of them, so telling us to do certain things that had been in place for ages could have been 'closing the stable door'", he opines.

The truth of the matter is that all the care home's preparedness "was carried out before any interventions by local authority, Welsh Government, UK Government, Public Health Wales, CIW, Social Care Wales and any other Public Office", Aled Rees notes.

He emphasises that "they all turned up late to the party", where most care homes by that time "were well and truly prepared, locked down and actually knew what they were doing".

However, occasionally, the mismanagement at local levels does pose a challenge, according to him.

"I do not blame the government, however, I have always felt immense pressure from Bed Managers to accept people from hospitals without them being tested and stating on discharge forms that there are no infections present", Rees elaborates. "This happens at local levels by Ward staff and their managers".

Much Depends on Care Staff

Still, despite all odds, Erwhir Care Home has managed to avoid coronavirus infections over the past month, according to the manager. He praises his care staff team that finished a four-week period in late May living in the home with residents, stressing that there have been no COVID cases spotted on their watch. Still, Rees admits that not all the employees are prepared to dedicate themselves to protecting the elderly. He bemoans the fact that yet another team is only prepared to do one week in the home to give the other team a rest.

"It is just frustrating that I have a very dedicated team of very unselfish care staff that are willing to shield living in, however, the other half of care staff are less than helpful when it comes to doing this", he says. "This is disappointing and therefore, the risk will always be there".

Now that the country is opening up, a second wave of the coronavirus seems inevitable, the manager foresees.

UK Coronavirus Lockdown 'Must be Loosened in a Safe Way,' Political Commentator Says

'The Sooner It's Scrapped, the Better': UK MPs Slam No. 10 Quarantine Plan for Arrivals