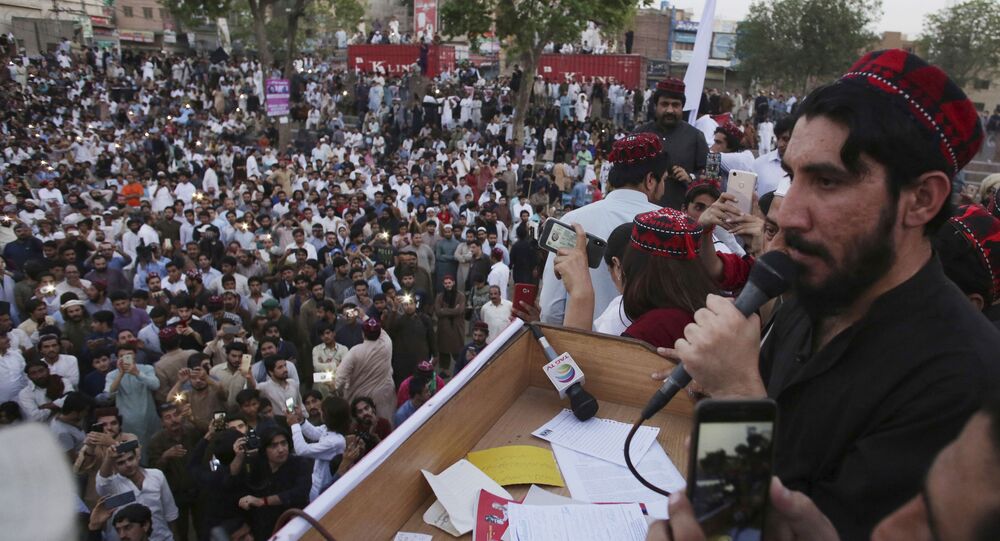 New Delhi (Sputnik): The Pashtun Tahafuz Movement, a formidable group of the largest ethnic minority in Pakistan, has become one of the most vociferous critics of the powerful military since 2018. The movement claimed scores of its workers have been killed or faced intimidation for challenging the army’s anti-terror operations.

“Yeh jo dehshat gardi he, isske peeche wardi hai (The military is responsible for this terrorism)” - thousands of Pashtun Tahafuz Movement (PTM) supporters raised this slogan across Pakistan on 5 May to mourn the killing of the group's leader Sardar Arif Wazir and exiled Baloch journalist Sajid Hussain.

I know the killer of Arif Wazir.
The big thing is .. Pashtuns have been killed for 70 years. They did not even know their killer.
Ali Wazir#StateKilledArifWazir pic.twitter.com/EQBJjMYJYN

​It was a rare moment for a country where the army has been considered the most powerful institution for 73 years of its history. The Pashtun Tahafuz Movement’s resistance towards the Pakistan Army has increased in spite of a warning in April 2019, when the group was told that its “time is up” due to alleged funding by foreign intelligence agencies.

Former Indian Ambassador to Afghanistan Gautam Mukhopadhaya, who considers it a “peaceful people’s movement”, said that the movement is “not going to end soon”. Talking about the importance of the movement, Mukhopadhaya says: “It is totally in contrast to the kind of image that has been created of the Pashtuns historically – of a violent, extremist, war-like people. This movement shows that they are against terrorism”.

While it is still not known who was behind the murder of the Pashtun leader Arif Wazir, who was a member of Pakistan’s National Assembly and a leader of the PTM; there are also questions over future momentum of the movement. Another leader from the group, Mohsin Dawar, has accused “state-sponsored militants” of carrying out the attack.

Dawar has said: “It is clear for them [the authorities] that they [state-sponsored militants] have a hand in it. There were cases in the past, and it [the government] kept quiet [about those cases] and even tried to influence those in the investigation.”

Pashtuns Protest Outside Pakistan Embassy in Washington For Political Activist’s Release
Pakistani Prime Minister Imran Khan, before coming to power, had promised peace to the Pashtuns, and even got their elected representatives in Khyber Pakhtunkhwa, where Pashtuns have a wide presence.

However, Mukhopadhay says that the Pakistani government has been suppressing the movement; they have completely blacked it out in the media. "They are trying their best but I don’t think they will be able to suppress it. Whether it will increase, I can’t say but this is very much a people’s movement and it is not going to go away”.

The cost of raising voice against the powerful army can be tracked in the annual report of the Human Rights Commission of Pakistan, in which every year thousands of people are registered as missing in Khyber Pakhtunkhwa.

The human rights report claimed that around 7,500 people are missing since 2018, when Mohsin Dawar established the PTM following widespread rallies across country against the killing of trader Naqeebullah Mehsud by police in Karachi.

#StateSponsoredTargetKilling
D genocide of Pashtuns is going on which every Pakhtun child hz understood bt what is d reason v lok at #Manzoor all d time v hve to stand up against ds oppression & terrorism ourselves, @ManzoorPashteen hz removed all doubts from us Should also dare pic.twitter.com/bRNl63NbhX

​The protest rallies of the PTM attracts the attention of thousands, as the members of the group raise demands for “an end to extrajudicial killings, enforced disappearances, removal of military checkpoints, and the establishment of a truth and reconciliation commission”.

“Their [Pashtuns] movement is a peaceful movement against the Pakistani military. It is a movement for Pashtun dignity, which they claim is being destroyed; that the Pakistani Army uses them for radicalization, extremism, terrorism”, the former Indian ambassador says.

But the history of the atrocities and killings against Pashtuns can be traced back to the Taliban’s fight against the Soviets. Last September, Pakistani Prime Minister Imran Khan provided details about the impact of America’s War on Terror strategies and its impact on ethnic Pashtuns.

© Photo : PRSF Islamabad-Rawalpindi/facebook
Student Leader Goes Missing from Campus in Lahore, Pakistan a Day after Student Solidarity March
Khan stated that it was Pakistan’s Inter-Services Intelligence, with the help of the US, which trained people to wage jihad against the Soviets in the 1980s.

"And so we created these militant groups to fight the Soviets...Jihadis were heroes then…Then comes 9/11, and Pakistan again joins the US in the war on terror and now we are required to go after these groups as terrorists. They were indoctrinated that fighting foreign occupation is jihad but now when the US arrived in Afghanistan, it was supposed to be terrorism", Khan said while adding that it was a blunder to join the War on Terror.

In the US war in Afghanistan, the North-West Frontier of Pakistan was in the direct line of fire, where al-Qaeda, the Haqqani network, and the Afghan Taliban have existed for more than two decades. Living in the area, which had become a battleground for the Americans remotely via drones, the Afghan Taliban, the Tehreek-e-Taliban Pakistan, and the Pakistan Army lives - and properties were completely destroyed.

Since 2007, the Pakistan Army has launched a series of fierce operations to weed out terrorist sanctuaries in this region, but in the process, massive civilian casualties have also been reported, which has angered the people of the region. The army successfully managed to displace the Pakistani Taliban (TTP) and its allies from the region, but intermittent attacks continue to target security forces and civilians. The Pakistan Army claimed that it has lost more than 6,500 soldiers in the military operations.

…And the Indian Connection

The PTM is one among the many groups in the region that are fighting for the rights of Pashtuns. Bushra Gohar, a leader of the Pashtun nationalist Awami National Party (ANP), which was founded by the son of late Pashtun independence activist Abdul Ghaffar Khan, said earlier this year after the arrest of prominent PTM leaders: “PTM questioning the return and regrouping of Taliban in the erstwhile FATA [and Khyber] Pakhtunkhwa is another major challenge for the security state. PTM is questioning the very foundation of the security strategic depth policy”.

Khan Abdul Ghaffar Khan, a Pashtun leader and famously known as “Frontier Gandhi”, who opposed the partition of India in 1947, fought for a separate homeland for the Pashtuns.

Pakistan has never recognised these ethnic nationalist movements as rights movements, but termed them as “anti-state” and fuelled by foreign intelligence agencies.

“There is not yet much impact of this in Afghanistan. But there have been some expressions of mourning and condolence in Afghanistan. PTM is in the Pakistan side of the Durand Line, Pashtuns areas in Pakistan and there is a reason for that", the former ambassador says.