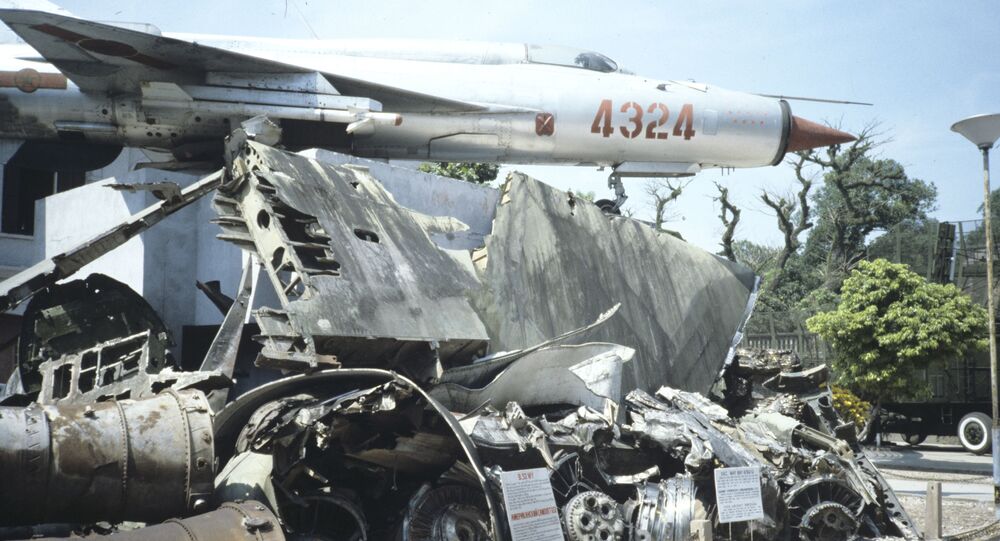 WASHINGTON (Sputnik) - A highly classified US Air Force base in the Nevada Desert for years was home to a secret squadron whose mission was to teach American pilots how to defeat Russian MiG fighter jets, its former commander told Sputnik in an interview.

Retired US Air Force Col. John Manclark, the unit's commander from 1985 to 1987, said he would not talk about how they came into possession of the Soviet planes or what went on at the Area 51 facility.

1 April marked 43 years since the creation of the 4477th "Red Eagles" Test and Evaluation Squadron in 1977, two years after the end of the Vietnam War. The unit operated until 4 March 1988, giving thousands of pilots first-hand experience of MiG-17s, MiG-21s, MiG-23s and some of their Chinese versions.

A Mystery Inside an Enigma

The secret pilot training program, dubbed Project Constant Peg, was hosted by Tonopah Air Force base, not far from the no-less-secret Area 51 base, north of Las Vegas.

The program remained strictly classified until 2006. Only those who absolutely needed to know about it had access to the information, while pilots were prohibited from talking about it. They did not stay at the site but were airlifted there daily or on workdays.

"I had no bosses who understood what we were doing. I had 200 enlisted people and 17 pilots. And no one helped me with whether the planes were flyable or what we could do with them. I mean we were just on our own," Manclark said.

The majority of pilots were experienced instructors in the rank of major or higher. Three were graduates of the Navy Strike Fighter Tactics Instructor program, more popularly known as TOPGUN.

All instructors were volunteers who knew the risk they took. The unit had 100 accidents per every 100,000 flight hours, around 25 times the Air Force average at the time, according to the colonel.

The squadron flew a total of 16,000 sorties and trained 7,000 pilots on a variety of Soviet jets and their Chinese clones.

"When I was there I had 26 MiGs I maintained. I had 10 MiG-23s, and I had 16 MiG-21 Fishbeds. Although towards the end we retired some of the old Fishbeds and were getting Chinese F-7s, which is a Chinese model of MiG-21. They were brand new, they were good," he said.

"When they show up on Monday, we brief them, and we start flying with them. And on Monday you might beat the hack out of them, but on Friday you won't. If they'd listen up," Manclark said.

The idea was that if they did not listen and lost the air-to-air fight they had to tell fellow trainees about their humiliating experience and make sure this did not happen again.

"You can tell a kid 'Don't slow down when you fight a MiG-21, because they'd beat you if you slow down... But he also thinks that he is the greatest pilot in the world. And when he goes up ranged and slows down and gets speed and gets beaten and has to tell his friends that he'd lost, that kinda imprints in his head and he ain't gonna do that again. And that was kind of the whole theory we had there," he explained.

"We believe it paid off. We haven't lost a single plane since Vietnam in the air-to-air fight. But it wasn't because of that program. That's because of new airplanes, that's because of better missiles, better training. It was just a contributor in the whole thing," he added.

Manclark said he had completed 301 sorties on MiG-21s. Four were to get to know the machine, while the rest were mock fights.

There were no flight simulator devices and very few manuals on how to fly a MiG. A pilot would study the jet on the ground for a couple days before taking it for a spin.

"In the bottom line it's an airplane like every other airplane. You didn't mess with them much. You got five rides and you were checked out. If you were a high experienced air-to-air combat instructor," the colonel said.

Cockpit controls in Russian jets were not labeled, but those in Chinese versions were.

"In MiG-21 I had about eight switches I fooled with. All these other switches — I had no idea what they did and I didn't fool with them. Leave them alone," Manclark admitted.

A couple of manuals they had were brought to them by spies, he revealed.

"You guys could see their hands on the pages when they were taking pictures of them. Then we'd have them translated by a computer, and they didn't make sense," he added.

A Soviet MiG's cockpit controls seemed easy to handle, but each model had its strengths and weaknesses.

"Each plane has problems, just like our planes. The MiG-21, the main problem with it if you got throttles back it took a long time for the engine to spool up and produce thrust," Manclark said.

It could take the plane 15 to 20 seconds to generate enough thrust, and in certain circumstances that could cost a pilot their life.

The MiG-21 compensated for it by being good in air-to-air combat, the colonel said, whereas his experience of flying the MiG-23, the first Soviet jet with variable-geometry wings, was less satisfying.

"It was a very unstable airplane. Fast, faster than anything we had, but it was just very unstable. It would depart very easily, it would go out of control and spin. No one liked it. The guys didn't like flying it. They didn't want to fly it. But it was OK, I mean, we checked them out," he said.

"I was lucky to have four or five of the ten flying on a good day," Manclark said.

The squadron had several fatal accidents. A MiG-17 crashed in 1979, killing the pilot, after spinning out of control. An MiG-23 was lost in 1982, killing Manclark's friend Mark Postai. Crashes of a Chinese F-7, an MiG-23 clone, and another MiG-23 came later, but their pilots survived.

Squadron mechanics took pains to replace as few parts as possible. The planes would get new speedometers, altitude meters and oxygen systems. Finding original spare parts for MiG-23s was more difficult than for MiG-21s.

Fabric in ejection seat parachutes and explosive charges used to propel the seat out of the aircraft had to be replaced every three years. Some parts were made at the military base, while others were outsourced.

Other reverse-engineering efforts were more successful.

The covert operation was closed in 1988 due to mounting costs, months after Manclark was rotated out of the commander job.

"A lot of airplanes were put on the range as targets, they shot them up. We couldn't sell them," he explained.

The MiG-21 he used to fly is on display at Eglin base's Air Force Armament Museum in Florida. The aircraft's picture on the website depicts it in the Soviet camouflage paint scheme used by the Red Eagles.

Training programs featuring Russian jet fighters continue at Nellis Air Force Base Complex near Area 51. The games, code-named Red Flag, have been staged since 1975. Three drills have been scheduled for this year.

A Su-27 mysteriously came down near the Nevada base in 2017, killing Lt. Col. Eric "Doc" Schultz, who was said to be the commander of the Red Hats squadron, an unnumbered unit operating foreign jets, including Russian Su-27Ps and MiG-29s. It is believed to be the successor of the Red Eagles.