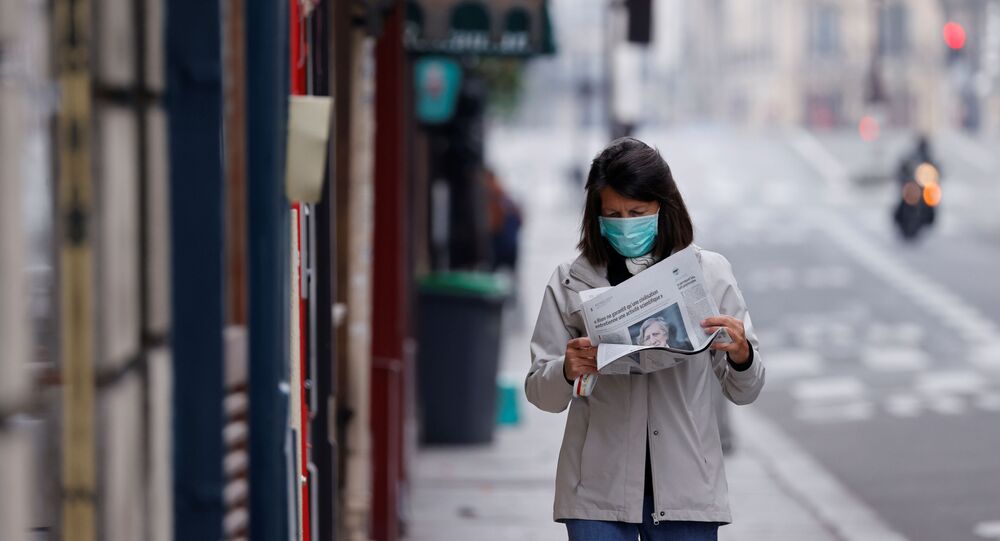 The Russians are up to it again. While nation-states on both sides of the Atlantic and Pacific oceans are making every effort to contain the coronavirus spread, the EU authorities eventually found the culprit behind the panic engulfing Europe. European observers have fact-checked the claim.

As the number of Covid-19 cases keeps mounting in Europe, the EU's External Action Service (EEAS) has raised the alarm over "a significant disinformation campaign" allegedly kicked off by Russian state media and "pro-Kremlin" sources to sow panic among Europeans.

"When we're speaking about this disinformation or false information circulation about coronavirus or Covid-19 [in Europe] we are always stressing that the source is either in Russia or can be tracked down to outlet which is obviously and has been exposed in the past as pro-Kremlin", Peter Stano, a lead spokesperson for Foreign Affairs and Security Policy, told the College meeting on 18 March.

Stano highlighted that EUvsDisinfo, the EEAS East StratCom Task Force's project, is releasing actual information about "fake news" coming from "outside" the EU. For whatever reason, the body singles out Russia as the main source of disinformation, branding a vast amount of websites as "pro-Kremlin" regardless of the fact that some of them don't originate in Russia and are not hosted by the country's providers.

'Blaming Russia for Every Ill Became the Go-to Response'

"The moment the coronavirus crisis started it was obvious that it would only be a matter of time before people will find some way of blaming this on Russia", says George Szamuely, an author and senior research fellow at Global Policy Institute. "The most straightforward response would have been to claim that the virus was manufactured in a Russian military lab a la Novichok. However, since the provenance of the virus is China – and has been known to be China for a long time – that option was out."

According to the author, "blaming Russia for every ill that befalls Western societies is now the go-to response among the media and the denizens of think tanks".

The "Russia did it" narrative has become routinely used by Western politicians and media pundits. Russia was blamed for the alleged poisoning of former spook Sergei Skripal and his daughter Yulia with no evidence presented to back the claims. It was "Russian hackers" who deprived Hillary Clinton of the much-desired victory in the 2016 presidential race in the US. The infamous "Trump-Russia collusion" narrative had dominated the US news until turning out as a big nothing-burger last spring. And don't forget Brexit, it was also the handiwork of "thousands of Russian trolls".

While pointing the finger at Russia's newspapers and fabled "pro-Kremlin media", no one has come up with any examples of "fake news" about the virus directly emanating from Moscow, Szamuely notes. "Russia is taking the coronavirus crisis seriously, and is not expressing any skepticism as to its potential devastating impact", the researcher emphasizes.

"Thus, all that is left for those who want to find a way to blame the coronavirus crisis on Russia is the assertion that Russia is sowing division", he opines. "That's a tried-and-true claim. There is never any need for evidence. All one has to do is to bring up something or other the KGB did in 1951 or 1961, then 'disclose' that Vladimir Putin had once worked for the KGB, and that's it: The case is made that Russia is using this crisis to undermine the West."

'It is Handy to Have an Outsider as the Bad Guy'

Anneke de Laaf, a Dutch political analyst, highlights that it is not the first time that Russia has been accused of spreading "coronavirus disinformation": it was American diplomat Philip Reeker, the acting assistant secretary of state for Europe and Eurasia, who raised the issue in late February. Predictably, the EU followed the US' lead as it has done many times before, she notes.

"RT and Sputnik and the unconformist social media activists appear to be the targets", she says. "EU agencies are known to take their lead from Washington in geopolitical matters. And there are close ties between the EU and NATO of course."

The Covid-19 "infodemic" erupted much earlier than when the US and the EU first began pinning the blame on Russia for waging a disinformation campaign. Since January, the US and China have been blaming each other for using the novel virus as a biological weapon, triggering a whole set of conspiracy narratives in the media.

Laaf notes that when she checked information circulated by Russia's English-language state-funded media, she found neither wild conspiracy theories nor disinformation there: "Once again, when you search for facts to substantiate the accusations raised against Russia, and the Kremlin specifically, you find that they are not there", the Dutch analyst highlights.

However, the US and EU officials' behaviour is by no means surprising, according to the political analyst: "With much fear and uncertainty and quite a bit of criticism about the way governments have handled the situation, it is handy to have an outsider as the bad guy for people to focus on", she remarks.

Roberto Vivaldelli, a journalist and author, echoes Laaf by saying that the allegations that Russia is "subverting European order by spreading panic about the coronavirus" are "simply shameful".

The journalist highlights the Italian people, for example, are "furious with the European Union for the very little solidarity received in recent weeks".

"European diplomacy should face 'mea culpa' instead of accusing Russia with the usual hoaxes", he says. "In this delicate historical phase, nations, especially Europe and Russia, must be united against a new enemy called coronavirus: instead the new and useless Cold War of the European elites against Moscow also continues with an ongoing pandemic."

Previously, the Italian government accused the European Union of being slow in lending a helping hand to Rome. Maurizio Massari, the Italian permanent representative to the European Union, urged the bloc to "go beyond engagement and consultations" and devise "emergency actions that are quick, concrete and effective", as quoted by The Guardian.

Belgrade has also voiced its deep dissatisfaction with the EU authorities' response to the coronavirus outbreak. On Sunday, Serbian President Aleksandar Vucic lambasted Brussels for refusing to provide medical aid to Serbia, which is currently applying to become an EU member.

"European solidarity does not exist. That was a fairytale on paper", Vucic said in a televised statement.

By March 2020, Europe has found itself in the midst of the coronavirus crisis with Italy, Spain and France being most affected among the EU member states. According to the European Centre for Disease Prevention and Control, since 31 December 2019 and as of 18 March 2020, 31,506 people were infected and 2,505 have died in Italy; 11,178 cases and 491 deaths were registered in Spain; France accounts to 7,730 infected and 175 dead. In general, over 64,000 Covid-19 cases have been confirmed in the European region so far.