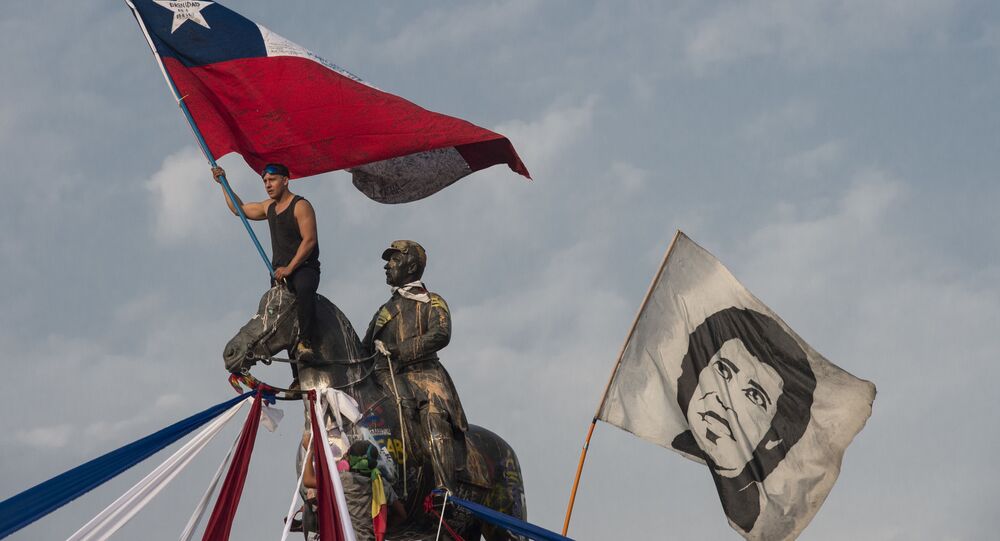 A number of Chile’s urban infrastructure elements have been unofficially renamed as a result of a social revolt in the country. Officially, the names remain the same. Sputnik has managed to talk to the rebels’ associates who believe they are “rewriting the country’s history".

“The appropriation of symbols and public places in Santiago has been one of the most relevant phenomena of this period; and this suggests that people have felt or are dreaming to feel that they can finally write their own history and change it to their favour", Marcia Fernández, art historian at the University of Chile, explained.

Igor Goicovic from the University of Santiago agrees with her. The historian believes that “the masses rename the places they occupy, thus confirming their control over the territory; and this is an important part of the popular mobilisation process".

“It’s also a way to pay tribute to those who are part of the movement and those who’ve proved to be heroes", the expert added.

The phrase “until dignity becomes customary” has been repeated many times during the Chilean protests. This expression aims to indicate the people’s dissatisfaction with widespread inequality, both economic and social; as well as with unequal access to basic services, health care, education, housing, pensions, and transport.

It was the increase in metro fares that resulted in riots on 18 October 2019. The unrest hasn’t stopped since then.

This slogan, combining various social demands, started gaining strength along with popular discontent in the capital’s Baquedano Square, commonly known as Plaza Italia, on the first day of the protests.

This place is one of the main symbols of the Chilean capital. Until 18 October, it was here that the main space for celebrations in Santiago was located; and after the social outbreak, the square turned into the epicentre of demonstrations.

After that symbolic phrase appeared and after the largest protest in Chile’s history on 25 October 2019, people renamed the square, calling it the Square of Dignity.

“From now on, for all Chilean people who are struggling to change this country, for the sake of justice and solidarity, this square will be called the Square of Dignity, and not Plaza Italia or Baquedano Square", young protester Tamara Velasquez said.

“In fact, now I know a lot more about who Baquedano was than before; but this is why we gather here. His story doesn’t reflect the spirit of the struggle that’s taking place here", she added.

The new name has also entered social networks, as many users took advantage of the option that appears on Google Maps, where you can officially suggest a name change.

On 9 November, to the surprise of many users, a new name appeared on the map near the square, the Square of Dignity. Today, the new name doesn’t appear on the map, but you can still find the square using this name.

On 3 December, the Square of Resistance was symbolically opened in Valparaíso. The new name suggests that it’s where the largest clashes between the protesters and the police take place.

Young people fighting “on the front lines” of the protests chose the figure of Carlos Condell, a seaman and hero of the Second Pacific War, to place a poster with the square’s new name on it. The statue of the Chilean army officer was also adorned with a hood and a shield with ACAB (All Cops Are Bastards) written on it. These are characteristic attributes of the demonstrators. In addition, a Mapuche flag was placed in the statue’s left hand.

On 27 December, near the Square of Dignity, Mauricio Fredes, a 33-year-old worker, died after falling into a 1.8-metre pit between Irene Morales and Alameda, Santiago’s main avenue, while running away from a police water cannon.

Fredes tried to escape from the cruelty of the Chilean military police, who resorted to the most severe measures attempting to suppress unrest in the square.

A month after his tragic death, Irene Morales Street was unofficially renamed after him. Musicians, street artists, participants in health pickets, and other people that wanted to honour his legacy attended the opening ceremony.

“The change of name is very important since it’s a different view of the event that will encourage people to ask questions. Mauricio Fredes should remain in the collective consciousness", Lorena Reyes, a teacher that attended the ceremony, explained.

“I’m here because I think it is essential to pay tribute to frontline protesters, like Mauricio. It is a way to tell them that we’re still here and we’ll continue fighting until dignity really becomes customary", she added.

“It is an honour for us to represent Chile with the name of Mauricio, and we are fighting day by day for this country to move forward because these thieves in the government are stealing more and more from us every day; and this way I can contribute to fight this", a young man wearing a hood said.

On 2 January, the Ministry of Culture, Art and Heritage of Chile initiated a large-scale inventory of damaged property throughout the country, including national, public and historical monuments that have been damaged since 18 October.

From 2 to 7 January, 669 monuments were listed, of which 441 were damaged: from small scratches to removed or replaced parts. Several monuments to the conquistadors and other Spanish historical figures were knocked down or beheaded, such as the bust of Christopher Columbus, who was knocked down on 1 November in Arica.

On 20 October, a group of people destroyed the statue of Francisco Aguirre, the founder of La Serena, writing “genocide” on it and replacing it with the figure of Milanka, a representative of the local native population.

Historian Marcia Fernandez believes that the abuse of Spanish monuments reflects changes in people’s thinking. “They are no longer ashamed of being descendants of Mapuche or Aymara, being mestizos or dark-skinned. On the contrary, people are proud of this and find the strength to resist".

The list of damaged monuments to the conquistadors includes:

But it’s not only monuments to Spaniards that have been damaged or overturned. Monuments to other figures that appear in Chile’s official history were also damaged. For example, in Antofagasta, La Serena, and Santiago the monuments to the national hero of the Republic of Chile, Bernardo O’Higgins, who signed the Declaration of Independence, were abused.

The same is for the monuments to President Manuel Montt (1851-1861), Commander-in-Chief of the Chilean Army during the Occupation of Araucanía Cornelio Saavedra (1821-1891), and the so-called King of Patagonia, Jose Menendez, who is blamed for the extermination of the Selk'nam people.

Goicovic noted that “people reject the symbols, which the ruling strata use in an effort to appropriate the history of the country and give it the meaning they need. Depriving monuments of their meaning or their demolishing demonstrates that people start questioning the official history, ceasing to accept the meaning that the elite has attached to this history. This is the destruction of idols that accompanies all revolutions".

The country’s official history is full of battles, where the heroes are mostly military; and today, during mass protests, people’s attitudes toward them have changed radically, their power has been unmasked and destroyed, just as the monuments to military commanders.

The monument to Arturo Prat, one of the symbols of the Second Pacific War, was overturned and put on a barricade on 14 November in Temuco. It was later returned to the Chilean Army.

Perhaps the most striking case is what happened to the monument to officer and pilot Dagoberto Godoy. His head was chopped off and hung on the statue of Caupolicán, a Mapuche leader who fought against the Spanish occupation and impaled.

© REUTERS / PABLO SANHUEZA
‘Little Aspirins’: Chile Sets Constitutional Process in Motion as Police Violence Continues
We see a situation, where the hero of the official history ends up in the hands of those who are considered to be historical “losers", in the hands of the lower people, the outcasts, those who are now associated with young people protesting at the forefront, like Mauricio Fredes and other “superfluous men".

“We shouldn’t forget that ordinary citizens are the protagonists of history; it’s they who change and transform it, despite the fact that the elite has arrogated the right to tell this history. What is happening in the country is not only the people laying claims to a major role in decisive events but also the opportunity to reappropriate historical symbols and understand their meaning", Goicovic concluded.