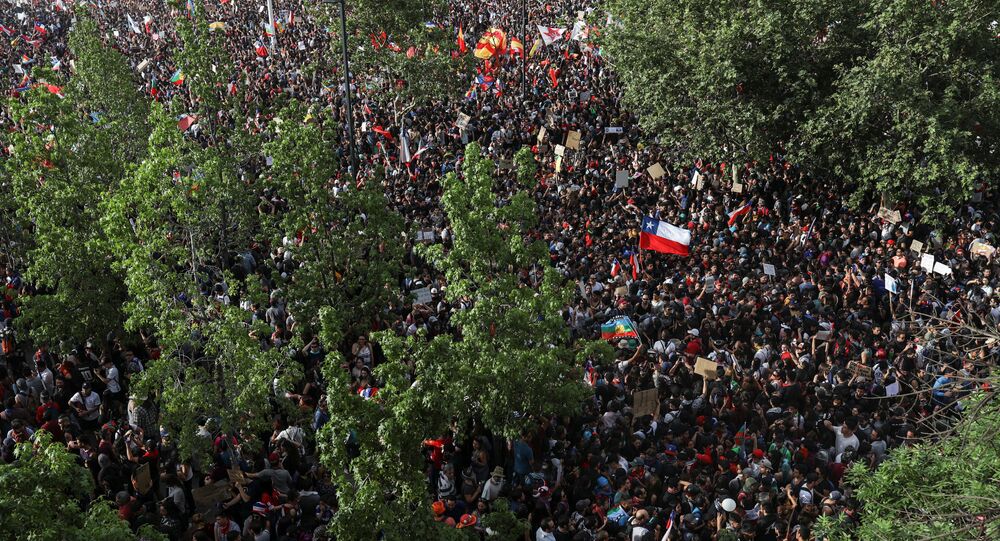 BUENOS AIRES (Sputnik) - Chilean President Sebastian Pinera said the authorities had heard the message of more than one million protesters who gathered in Santiago for a large-scale anti-government demonstration.

"Today, a large-scale and peaceful march is underway. During it, Chileans are asking for a more fair and united country. It opens a large road to the future and hope. We all heard your message ... God willing, we will walk this road for better Chile for everyone," Pinera wrote on Twitter late on Friday.

Earlier in the day, more than one million people gathered in central Santiago for the largest protest in the country's history.

Late in the day, outside the presidential palace, the police used water cannons and tear gas against the demonstrators. Gunshots are heard in the area.

Chile has been mired in protests since 6 October, when the authorities increased subway fares. What started as peaceful public demonstrations has turned into wider discontent with social policies and violent clashes with law enforcement agencies. At least 19 people have been killed as a result of the unrest.

The country's authorities have since proposed a series of measures to calm the protesters, promising to allocate $1.2 billion to solve social problems. They have also introduced a curfew in a number of cities, yet protesters frequently defy it.

Death Toll From Riots in Chile Rises to 10 - Local Authorities