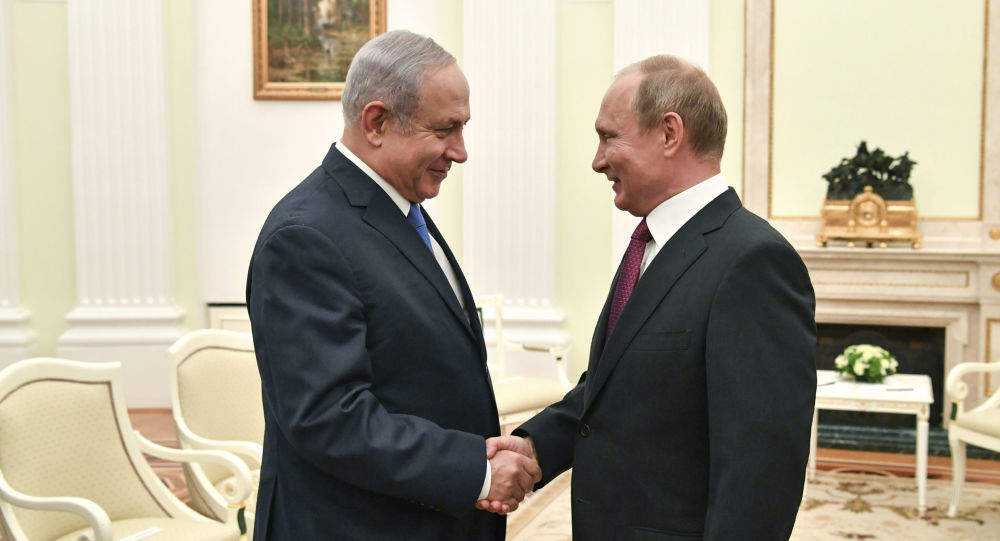 Out of more than 45 leaders who will attend the 5th Holocaust Forum, scheduled for Thursday in Jerusalem, the Israeli press has been focusing one in particular - Russia's President Vladimir Putin.

The Russian head of state is expected to arrive in Israel on Thursday and attend the event commemorating the 75th anniversary since the Soviet liberation of Auschwitz, the notorious death camp in Poland where near a million Jews have lost their lives.

But all eyes will be on him for a different reason. Putin is set to meet with Israel's Prime Minister Benjamin Netanyahu to discuss a potential release of Naama Issachar, the young Israeli woman who has been jailed in Russia for drug smuggling. Israel believes her detention and subsequent arrest have been used by Moscow to bang out a number of concessions out of Tel Aviv, including the transfer of ownership over Alexander Nevsky Church - deemed important for Russia's Orthodox -  a request that has been previously denied by Israel.

Apart from Naama, Putin, who has been visiting Israel for the third time, is also expected to discuss Russia's military and economic cooperation with the Jewish state, while later he is set to meet with the leader of the Palestinian Authority Mahmoud Abbas to open a new cultural centre in Bethlehem.

For Moscow, Israel is not only a military partner that coordinates its actions over Syria to avoid an accidental exchange of fire with Russia, which has been involved in a conflict in the Arab country since 2015. The Jewish state is also a trading partner.

In 2018, Israel's exports to Russia stood at more than $670 million. Although this figure pales in comparison to the country's trade with the European Union and the US, Russia is considered a stable market independent of trends that call for imposing boycott and sanctions on the Jewish state as a means to change its policy towards the Palestinians.

And there is a cultural element too, as Israel is home to about two million Russian-speakers, the fifth largest Russian-speaking community outside of Russia.

"This community has been perceived as a bridge connecting the two countries; and there has been a theory that one day these people might go back and help Russia to overcome its demographic problem," explained Shenhar.

However, common interests do not prevent Russia from cooperating with Arab states, some of which are hostile to Israel - believes former diplomat. "Russia gives political and military support to Arab states that are hostile to Israel; it recognises organisations like Hamas as legitimate representatives of their people; it helps Iran to build its nuclear reactor in Bushehr and it sells weapons to Syria, which lets Hezbollah [Shiite militia linked to Iran] use them against us".

In this respect, says former ambassador, Putin hasn't changed the policy of his Soviet predecessors.

Although the Soviet Union voted in favour of the UN partition plan that split Palestine between Jews and Arabs in 1947, it got quickly disillusioned with the newly established state's capitalistic approach and its tendency to tilt towards the West.

As a result, during the Cold War, the Soviet Union not only backed the Arab states politically but also militarily, although Moscow has never acknowledged this.

Tensions were so high that in 1953 the Soviet Union cut off its ties with Israel, with its diplomatic mission resuming only after the collapse of the block in 1991.

When Putin came to power in 2000, the future looked promising. Brought up by his Jewish neighbours, the Russian head of state has never hidden his support for the Jewish people. Known for his good relations with the Chief Rabbi of Russia Berel Lazer, Russia under Putin has invested some $50 million into the Jewish Museum and Tolerance Centre in Moscow, which opened to the general public in 2012.

Replacing Washington is Not an Option

However, despite thawing relations between the two countries, the former ambassador doubts it will be enough to substitute the US as Israel's main ally.

"I don't think Russia will ever be able to replace the US, as our relations with Washington are so long, steady and meaningful that it is hard to see Israel changing that course".

Washington, which since World War II has given Israel more than $142.3 billion in bilateral assistance and missile defence funding, has also backed Israel on the international arena. In 2018, US President Donald Trump recognised Jerusalem as Israel's capital and a year later he acknowledged the legality of Jewish settlements in the West Bank, considered occupied Palestinian land under international law.

© AP Photo / Oded Balilty
Israel Understands That 'Russia is a Key Factor in Middle East Politics' - Politician
Still, the Middle East has seen instances when allegiances have shifted. Such was the case with Egypt, which has not only signed a multi-billion-dollar military deal with Moscow but has also granted Russia access to its military bases, a move deemed by the New York Times as a sign of the "waning influence of the United States in the region and the world".

Such was also the case with the Kurds, who turned to Russia, asking for military deals and protection, after US President Donald Trump announced he would pull out his troops from Syria, leaving the Kurds exposed to Turkish forces.

"America's moves did show in a way that Washington cannot be trusted but I don't think it is wise for Israel to put all our eggs in the Russian basket. After all, Russia is not a democracy and Putin doesn't have any friends, he only has interests".