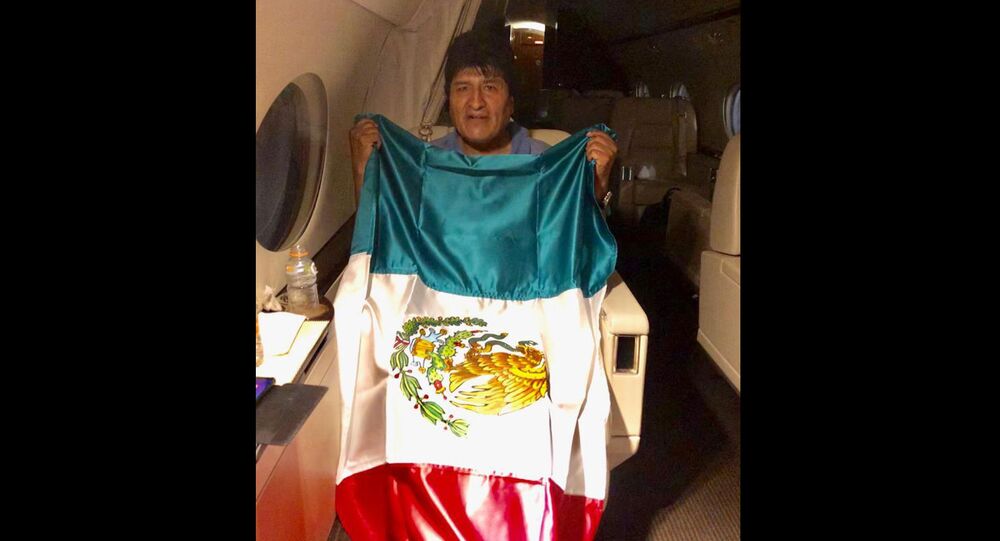 The United Mexican States has granted asylum to Evo Morales, who had previously announced his resignation from the presidency of Bolivia due to an ongoing political and social crisis.

Jorge Luis Santa Cruz, a journalism professor at Universidad Anáhuac México, and Luis Huacuja, an academic from the National Autonomous University of Mexico (UNAM), have offered their views on what effect Mexico's decision to grant asylum to Evo Morales may have on the internal situation in the country and its relations with the US.

Cruz believes that with this decision, Mexican President Andrés Manuel López Obrador "opens another front" in the country’s domestic politics.

According to him, granting asylum to Morales doesn’t benefit the Mexican president, who had already been harshly criticised by the opposition as a result of a series of controversial decisions, such as the release of Ovidio Guzmán López, son of drug trafficker Chapo Guzmán.

“Bringing Evo Morales to Mexico will arouse concern not only in the National Action Party (Partido Acción Nacional) but most likely in the private sector, among entrepreneurs. The fact of him bringing Morales to Mexico reaffirms his priority of a pro-left stance,” Santa Cruz noted.

In turn, Luis Huacuja, an academic from the National Autonomous University of Mexico (UNAM), stressed that the Mexican authorities have always expressed "a firm stance against the coup" and "it’s becoming increasingly clear" that what happened in Bolivia was a coup d’état.

By granting asylum to Evo Morales, the Mexican President isn't breaking with his electoral promise not to interfere in the internal affairs of other countries; on the contrary, the position of the Mexican Government is consistent with the principles of its foreign policy: that of non-intervention and the protection of human rights, although sometimes it’s difficult to combine the two, the UNAM academic said.

According to Huacuja, the decision to grant asylum to Morales is a consequence of an extraordinary situation in which "a military intervention" took place in Bolivia.

“It is a palpable fact, which leaves no doubt,” he told Sputnik.

Jorge Luis Santa Cruz believes that the decision to grant asylum to Morales can affect Mexico’s relations with the United States as well as the agreements that have been signed between the two countries.

In this regard, the expert recalled that today US President Donald Trump’s re-election campaign is in full swing, and the resignation of Evo Morales adds political capital to those who don’t like to see leftist regimes proliferate in Latin America.

“Granting asylum to Evo Morales undoubtedly means a challenge to the President of the United States. As his means of pressure against Mexico, Trump has not only delayed the ratification of the Treaty between Mexico, the United States and Canada (T-MEC), but also the possibility of imposing tariffs on Mexican imports,” he said, adding that “the threat of building a wall, that is becoming reality.”

According to the professor, this is the reason why sooner or later, there will be some reaction or a statement from Washington.

However, Luis Huacuja has a different approach to the matter. The academic recalled that, throughout its history, Mexico has had positions that didn’t necessarily coincide with those of the United States, as in the case regarding its relations with Cuba. According to the academic, López Obrador’s decision won’t affect the T-MEC ratification for two reasons.

“Firstly, it is an obviously commercial treaty. Secondly, Mexico has already done this, it has approved the Treaty. In this sense, I think that one thing has nothing to do with the other,” he said.

Bolivian elections have once again demonstrated the lack of union and trust among the members of the Organisation of American States, which alleged numerous violations during the last presidential election in Bolivia. Jorge Luis believes that today there is clearly disunity in Latin America.

According to Santa Cruz, there are countries that are aligned with the "Zionist evangelical bloc headed by President Donald Trump". This block has a strong presence in Guatemala, Honduras and El Salvador, according to the expert. There are also countries like Venezuela, which have more ties with another bloc, the globalist one, with multimillionaire George Soros as its head.

© AP Photo / Juan Karita
Plane Carrying Morales Lands in Paraguay After Getting Refusal From Peru - Reports
The Universidad Anáhuac México professor thinks that on the one hand, the OAS has lost its power because it hasn’t been able to "overthrow President Nicolás Maduro in Venezuela"; on the other hand, it is still influential since it has managed to "influence the resignation of Evo Morales in Bolivia."

This is the reason why he sees the OAS as an organism that is in a state of decomposition but is still strong thanks to the support of the Central Intelligence Agency. Therefore, according to the expert, its fate will depend on what happens in the US.