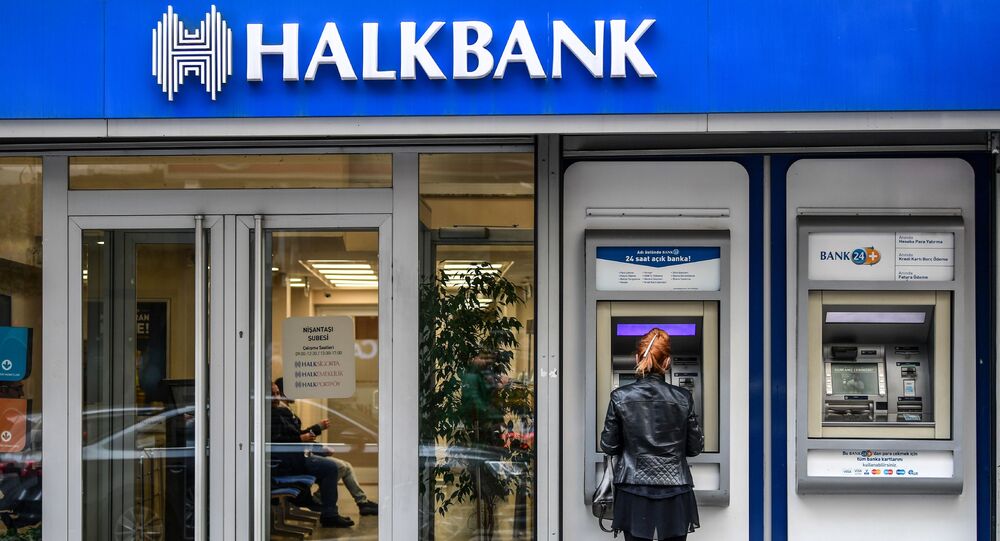 The US Justice Department has charged Turkey's Halkbank with fraud, money-laundering, and sanctions offences, claiming that it was involved in a shady scheme to illegally transfer $20 billion worth of restricted Iranian funds to Iranian parties. Turkish President Erdogan decried the move as "illegal, ugly step."

Dr Birol Baskan, a Turkish political scientist and a non-resident scholar at the Middle East Institute, reflected on the timing of the US charges against Halkbank and current US-Turkey tensions in general.

Sputnik: US prosecutors charged Turkey’s Halkbank bank over its alleged role in a scheme to evade sanctions on Iran. What can you say about the timing of this indictment, bearing in mind the current status of US-Turkey relations in light of the operation in Syria?

Birol Baskan: The charging of Halkbank came at a time when President Trump was facing a serious backlash from Democrats and also his own party fellows - Republicans - over his decision to withdraw American troops from Northern Syria and to give green light to Turkey to intrude into Northern Syria - to eradicate the PYD, which Turkey sees as, for good reason, the PKK’s Syrian branch - and as you know, Turkey accept the PKK as a terrorist organization.  So, this came at a time when President Trump was facing a serious backlash - and to appease even his own party members - the Republicans – President Trump announced that he is going to cooperate with the Congress to impose harsh sanctions on Turkey. And President Trump announced his own sanctions on Turkey a couple of days ago. But from the content of the sanctions, it seemed that President Trump really did not want to punish Turkey - so the measures he announced were interpreted as soft - even, for example - when he announced the sanctions - the US dollar-Turkish lira responded positively and decreased.  Even the markets interpreted the sanctions as particularly soft. This did not really appease the establishment in Washington, D.C. They wanted more punishing sanctions on Turkey. But of course, President Trump could not also make Turkey happy - there was a backlash from Turkey as well. So, President Trump, in order to further appease both sides - he wanted to send a delegation to Turkey to talk about the possible withdrawal of the Turkish troops and to start a negotiation process with the PKK for a possible peaceful settlement.  So, the announcement that the Halkbank is indicted came at this very peculiar time. It is not really a legal decision. Strictly speaking, it is a hundred percent political one and came at a time that President Trump could have done something meaningful for the Kurds and for Turkey as well. President Trump is not really trying to push Turkey away by going along with the Congress and then imposing harsh sanctions on Turkey. The indictment really shows me that some people in the United States want harsher punishments or sanctions on Turkey and then they see President Trump is dragging his feet to do that. The indictment is a kind of sabotage or a sabotaging act on the side of the establishment here to burn whatever bridges are left between President Trump and Turkey. And then, of course, the indictment received also harsh criticism from Turkey and President Erdogan even said that I am not going to meet the delegation. Hopefully, he changes his mind and meets the delegation. So, in Turkey, we say – it’s deep state, I guess, the American deep state is at work here, by unleashing this indictment. Nobody can say that it’s non-political.

Sputnik: Halkbank has lambasted Washington's decision to indict it, describing the move as an unprecedented legal overreach. What steps can we expect next? What consequences will this indictment have for Halkbank itself, and how it might affect other Turkish companies?

Birol Baskan: I am not really an expert on the legal side of this issue, but I am sure Halkbank is going to cooperate with the US. But given the highly sensational situation in Turkey, especially where the populist and nationalistic feelings are running high – Halkbank should have reacted to the decision. But behind back doors, I guess they will come to a settlement. This is my take on it. I don't think that Halkbank is going to refuse cooperation with the US authorities. But for public consumption, the bank has to criticise the decision to indict the bank. So I expect next that behind the back doors Halkbank is going to cooperate with the US. And also with the intervention of President Trump, maybe the punishment or the fee that is going to be imposed on Halkbank can be reduced. Of course, Halkbank is going to pay a lot of punishment for this. I don't know how much, but previously, I guess, a German bank paid like a couple of billion dollars. And as you know, the US legal system really punishes very harshly when it comes to financial crimes. And might charge Halkbank billions of dollars. And this is going to have negative consequences for the bank's share - not only the Halkbank, but also all banks in Turkey will have serious trouble with this. How it might affect other Turkish companies  - there are some rumours that some other Turkish banks are also involved. So, they might also face a similar indictment and financial punishment might ensue. And of course, this is a time that the Turkish economy is really fragile. And I am sure it's going to negatively affect the Turkish economy overall. And we have already seen that the dollar-Turkish lira, euro-Turkish lira skyrocketed in the last week or so.

Sputnik: How will this affect current tensions between Turkey and the US?

Birol Baskan: The relations between Turkey and the U.S. is now at its historical lows. The last time that Turkey and the US had a similar situation was after the Turkish military operation in Northern Cyprus – when the US imposed a military embargo on Turkey and we are going in that direction. How far it can get - it's really difficult to predict. I am now in DC and anti-Turkish sentiments are at a historical high in Washington. And this is also partly domestic politics – I mean, they want to get rid of Trump in the next election. So they will use this against President Trump in the coming weeks. So, this means that the relations will not go better. But how worse it can get? There is also this counter-narrative in DC which is saying that we are losing Turkey. Turkey is a NATO ally. We had good relations since the Second World War. Some people in Washington, D.C. are suggesting that we should not lose Turkey to Russia, of course, here, given the improving relations between Russia and Turkey and there is a good reason for Turkey to approach Russia further. So, some people in DC are promoting this alternative view. But which one is going to win is difficult to guess at this time.