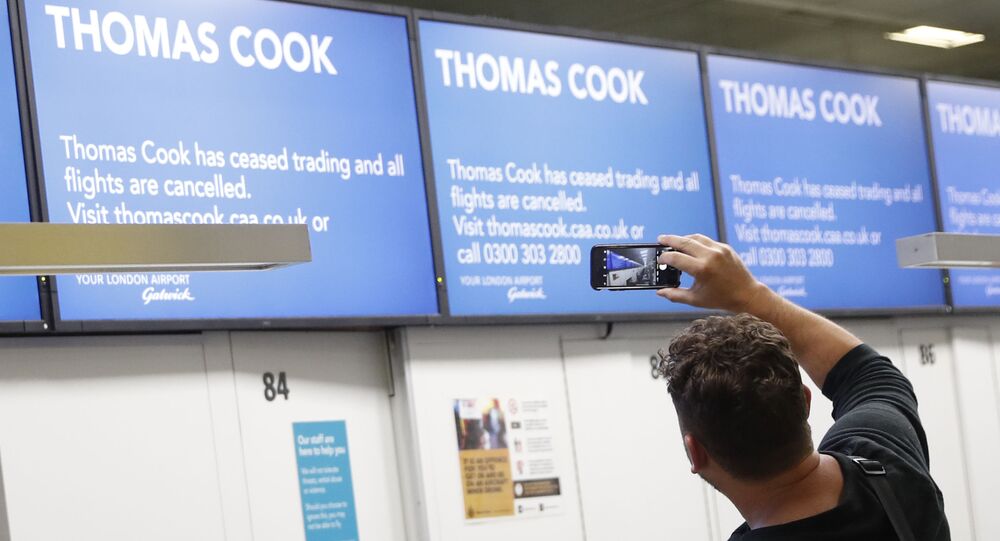 According to some estimates, the 178-year-old travel giant's collapse put 22,000 jobs at risk worldwide, including 9,000 in the UK.

"I would like to apologise to our millions of customers, and thousands of employees, suppliers and partners who have supported us for many years," Peter Fankhauser, the chief executive of Thomas Cook, said in an official statement on 23 September.

The company's bankruptcy followed a long period of financial difficulties caused by various factors, including uncertainties triggered by Brexit as well as competition from online travel agencies and low-cost airlines.

We are sorry to announce that Thomas Cook has ceased trading with immediate effect.

​In a last ditch effort the travel giant tried to sell a majority stake to its largest shareholder, the Chinese investment company Fosun International. However, the £900 million rescue deal failed, while talks with creditors and British authorities also failed to materialise.

Commenting on the tour company's liquidation UK Prime Minister Boris Johnson opined that the government was right not to provide Thomas Cook with a bailout of £250 million: "We need to look at ways in which tour operators one way or another can protect themselves from such bankruptcies in future," he said.

According to Dr David Beirman, a senior lecturer in the Management Discipline Group specialising in tourism at the University of Technology Sydney, "the collapse of this iconic company has come as a big shock."

He suggests that the travel company "extended itself into areas (especially airlines) which were beyond its core business."

"Profit margins in tourism businesses tend to be very low and Thomas Cook had invested in a number of destinations which experienced rapid declines in demand due to terrorism and political instability," he says, adding that it was certainly the case with Thomas Cook's programmes in Tunisia, Egypt and Turkey.

For his part, professor John Lennon, director of the Moffat Centre for Travel and Tourism at the Glasgow Caledonian University, draws attention to "mergers and consolidation" the travel operator has undergone in the recent years: "The merger with Airtours and MyTravel Group left it with a major debt burden of £1.7 billion that became harder and harder to service," Lennon recalls.

In addition, the rapidly changing competitive environment and advent of budget air travel combined with "consumer uncertainty and weaker sterling as a result of Brexit" took its toll on the company.

"This combined with the debt mountain and increasingly nervous lending organisations left limited possibilities for an alternative outcome", he presumes.

Dr John Tribe, Senior Lecturer in Law at Liverpool Law School at the University of Liverpool, specialising in insolvency law, bankruptcy history and equity and trusts, believes that "it's not necessarily about short term liquidity issues that have happened recently, it's more about how the company is being conducted or being allowed to conduct itself for the last eight years or at least the last decade."

"It should be a very rigorous examination of the last 10 years to see what directorial behaviour decisions were made", he says.

"That has brought us to this point and also a thorough examination of the regulations", Dr Tribe explains. "So, for example, section 174 of the company bank, which is about directors duties and how the director themselves have been able to cause this liquidation [that] was [a] very costly liquidation to come about. So the government has to step in the interim - of course it's the question of repatriation for those that are stranded abroad but that would be covered by after all and after another insurance mechanism."

David Coker, senior lecturer in finance at the School of Finance and Accounting at the University of Westminster, agrees that Thomas Cook's problems actually started about 10 years ago, stressing that the "fundamental reason is debt" that eventually killed the company.

"You know there we’ll talk about a company that's sitting on two billion dollars in debt and it's about 20 percent of their revenue - it's not a good place to be. And they did this - they took on this debt for about 10 years ago - most of it was acquired," Coker says, adding that due to its indebtedness the travel giant was unable to overcome "the perfect storm of issues that happened geopolitically."

Commenting on the potential consequences of the liquidation, he notes that "there's a lot of uncertainty for people that are already travelling."

"A lot of people are now very nervous about package holidays," he notes. "I could see that eroding trust in this business model going forward."

Now that the company collapsed the British government has launched what Foreign Secretary Dominic Raab calls the "biggest peacetime repatriation in the UK history" as the job of bringing UK travellers home fell to the country's Civil Aviation Authority (CAA).

If you have a trip booked with #ThomasCook, visit the dedicated @UK_CAA website here: https://t.co/1amSKPaxuN pic.twitter.com/i1GK27j5nB

​The British travel company was founded in 1841 by Thomas Cook and became a model of organised tourism. Having started with railway excursions the company acquired a lot of assets, such as hotels, resorts, as well as the airline, over 178 years. According to Reuters, the number of Thomas Cook's customers was as high as 19 million people a year.

Path to Collapse: A Look at the History of UK Travel Company Thomas Cook