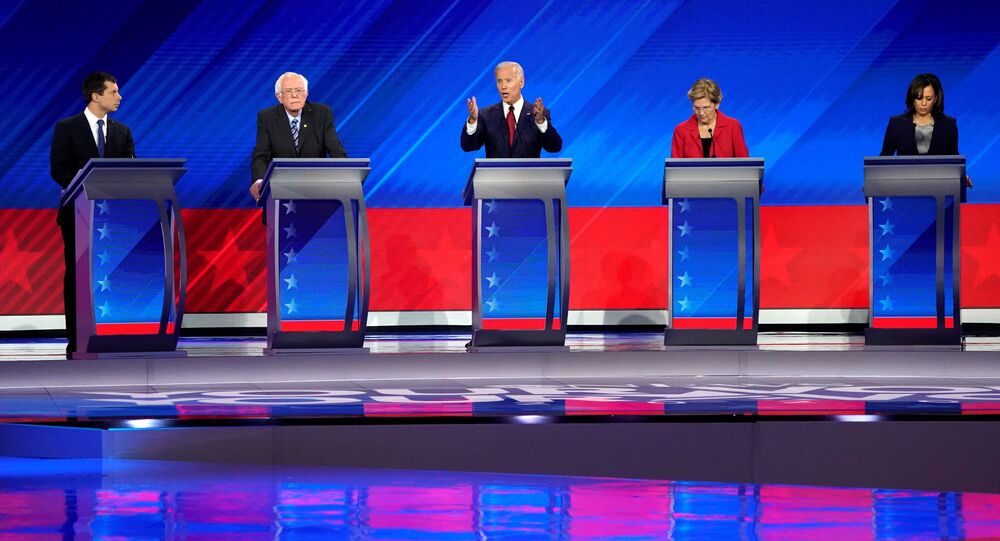 Eurasia Centre Vice-President: Democratic Party Is Not in Touch With Needs of American Public

The third Democratic primary debate was held at Texas Southern University in Houston last week. Eurasia Centre Vice-President Earl Rasmussen expressed his opinion about possible nominee from the DNC to run for president.

Sputnik: Who’s currently the frontrunner out of the Democratic presidential candidates, in your view? How did the third round of the debates change the battlefield?

Earl Rasmussen: I think although the percentage rises with Vice President Biden in the lead, I would say right now the current frontrunner as time goes on right now is Elizabeth Warren. I think that those are the two current ones on top. I just see Mr Biden declining somewhat, he’s not as tuned to some of the different shifts in the Democratic Party, he’s more of an incrementalist with a lot of push to and I don’t know maybe a better solution. But it seems that currently, the Democratic establishment seems to be trending towards Mrs Warren. As far as what shift the debate caused – I don’t think that it caused much of a shift at all. What I did see was shift in some statements across multiple candidates, especially on foreign policy which are echoing some of the things that were initially brought by the one of the best candidates, which was not present – Congresswoman Tulsi Gabbard. So I see the shift in the foreign policy towards things that she was representing other than that – it’s pretty much the same. You’ve got Bernie Sanders, who’s also a leading contender, but who is little outside the box of what is normally acceptable. So that brought some shift in that direction, but we’ve got middle ground person - Mr Biden and middle with somewhat left-leaning Mrs Warren - the leaders, other than that I don’t see there’s a major shift in the debate at all.

Sputnik: You’ve mentioned the absence of Tulsi Gabbard. How would you assess her rhetoric, in particular on US foreign policy, and her chances of becoming the frontrunner?

Earl Rasmussen: Couple things – one, personally, from my own perspective - as I’m a former military as well - I see, although I don’t agree with all of her policies - I see her standing up for values in which she believes in, rather than bending to whatever the political or public areas are. […] She stands up for her believes, her character, her statue, her ethical values are much more presidential than anyone else that I’ve seen in this. I don’t express bad in anyone else, but there are so many people that are just opinion based on whatever the poll going to say, rather than a leader. She’s one of a few people of the group who is a true leader - and it’s really what we need right now. But she’s been demonized by liberal press, by the media, she has been criticized by the DNC itself ever since she did not support Mrs Clinton [...] I don’t see the establishment shifting support for her unless she can make it to the primaries. I hope she actually stays active to provide a voice in that direction, voice concerns and to be the voice of the people and her people to hear a vision she has which is important. […] She seems to be the most qualified and mostly steep person in the foreign policy area, she’s one that reaches out - she would have a positive dialogue with Russia, she’d have a positive dialogue with a lot of our crisis situations in the world, she independently went to Syria, met people in Palestine, with Assad, with rebels, with people - to provide her own prospective. Unfortunately, most of our politicians do not do that.

Sputnik: Who do you personally believe will be the nominee from the DNC to run for president?

Earl Rasmussen: I hope Mrs Gabbard is in there, but right now I see Elizabeth Warren as the ultimate DNC candidate - unless she does something that displaces her. Biden decreasing overall… The problem is - I read something the other day, somebody wrote, that all democrats are watching the debates – the debates watching party, and this is all heading towards circumstances that the Democratic party is just handing Mr Trump reelection - people were choosing from them, Trump will win - I found it interesting. Indeed, right now, unless the DNC does something different, they’ve basically blocked themselves into the very difficult situation to win the election next year.

Sputnik: How does the American public assess the current standing of the various candidates?

Earl Rasmussen: What I think is that the Democratic Party is not in touch with the needs of the American public. […] I think the American public is... on the foreign policy side, they are tired of wars, tired of our manipulations and our meddling in other people governments and wish they would focus more on us – we have huge number of homeless people, we have mounting tiles of student debt, we’re the only developed country which does not provide healthcare for everyone, the only developed one - you can call it socialist, whatever you want - the bottom line is we’re the only developed country that doesn’t make sure that people have quality healthcare. I was just a tourist, had some business meetings in Moscow and had an accident – and my Medicare was exceptional – ambulance, medic evaluation, hospital take care, got me through, prescribed medication… I came back and I told my doctor what happened - and he went ‘Oh my gosh, yeah we should do something similar’... I think we need to do something serious on the Medicare side, healthcare side and I think also we need to be concerned about education, homelessness, valid issues should really have an address. And again on a foreign policy – people are very, very tired of our continuous aggressive stance and we just, we’ve got to step back and we have to have somebody that would put a hold on the deployment of soldiers, whether it’s economic warfare, military warfare – we need to rethink our whole policy in that direction and I think people are tired of this.