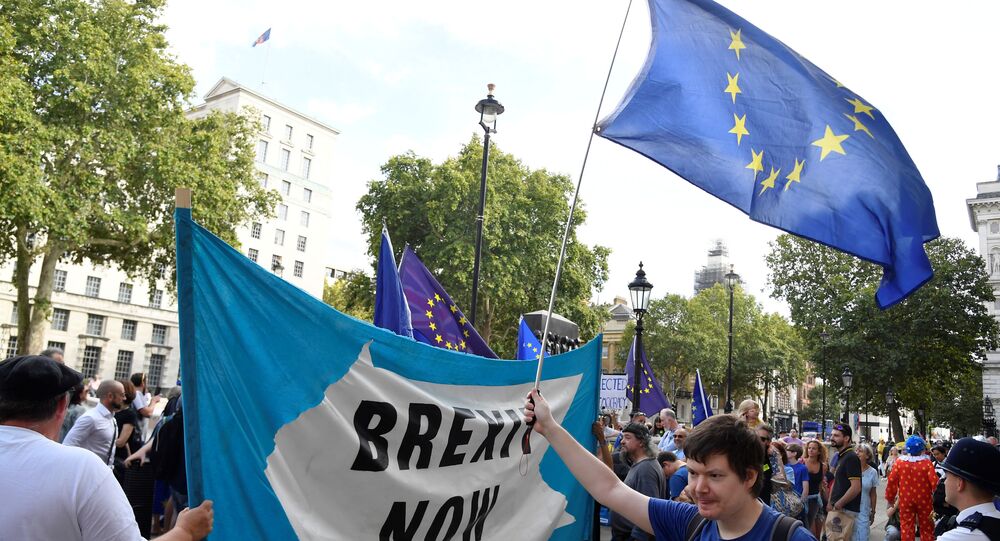 UK Prime Minister Boris Johnson has urged lawmakers to vote against a Brexit delay, saying that "under no circumstances" would he ask Brussels for one. Roger Helmer, a Brexit Party member and former MEP, believes that if the motion to block a no-deal Brexit passes in the Parliament, it would put Johnson "in an impossible position”.

Sputnik: Senior government officials have said that Boris Johnson will call a general election for 14 October if he loses a crunch vote designed to block a no-deal Brexit in the House of Commons. How significant are these recent moves? Is this a wise move from Johnson?

Roger Helmer: It's almost an inevitable move isn't it? He cannot tolerate being a prime minister, being instructed to go back on all the commitments he gave when he became the leader of the Conservative Party and became a prime minister, so I think it's a case of needs must - there are very few alternatives for him.

I think that it is touch and go. If the motion is carried, then, as I say, that puts Boris Johnson in an impossible position and I think he's pretty much forced to try and go for a general election. If, as is still possible, this new proposal is voted down, then he can just continue as things are. I suspect he will want a general election before the end of the year anyway, but he won't be under pressure to have one immediately.

Sputnik: Looking in the mainstream media recently, we've seen a variety of commitments from Boris Johnson: everything from police funding to health spending - it's almost like Boris Johnson has been gearing up for this for some time.

Now if Boris Johnson was to get his general election before 31 October and if he was to publish a Conservative manifesto, saying it is now clear that the only remaining option for Britain is a clean break, a no-deal Brexit and that is what my new government will do, I think in those circumstances the Brexit Party will be only too eager to support and back him - perhaps in a selective way.

Sputnik: Could you see the possibility of something like an electoral pact between the Conservative Party and the Brexit Party in the advent of a hung Parliament, if a general election is to take place?

Roger Helmer: If there were a hung Parliament as the result of a general election and if there were Brexit MPs, as I suspect there would be, then it would be astonishing if some sort of conversation didn't take place. I don't myself see any chance of a genuine coalition between the two parties; I don't see Nigel Farage applying to become a minister in a coalition government. But the Brexit Party is very clear: its primary objective is to get a clean break and its elected representatives will do everything they can to deliver that.

Sputnik: Boris Johnson has played quite a strong hand recently, especially in the recent weeks sticking to his commitment that there will be no further extension for Brexit; what problems can you identify on the horizon for Boris Johnson among Conservatives, but also Brexiteers going forward?

Roger Helmer: The biggest problem, I think, will be if this legislation banning a no-deal Brexit is carried this week and if Boris Johnson then comes back and says "right, well, I want a general election", of course he does require a two-thirds majority in Parliament to get a general election.

If Parliament then decided it didn't want a general election and refused to do that, I'm honestly not clear where we would go from there, because we would have a prime minister who wasn't really in control of the Commons and effectively lost a vote of confidence because he's regarding this new legislation as a vote of confidence. I think we would have a mess and I think we would have - sooner or later, and probably sooner - to have a general election anyway and if we don't have one in October, then I suspect November or December.