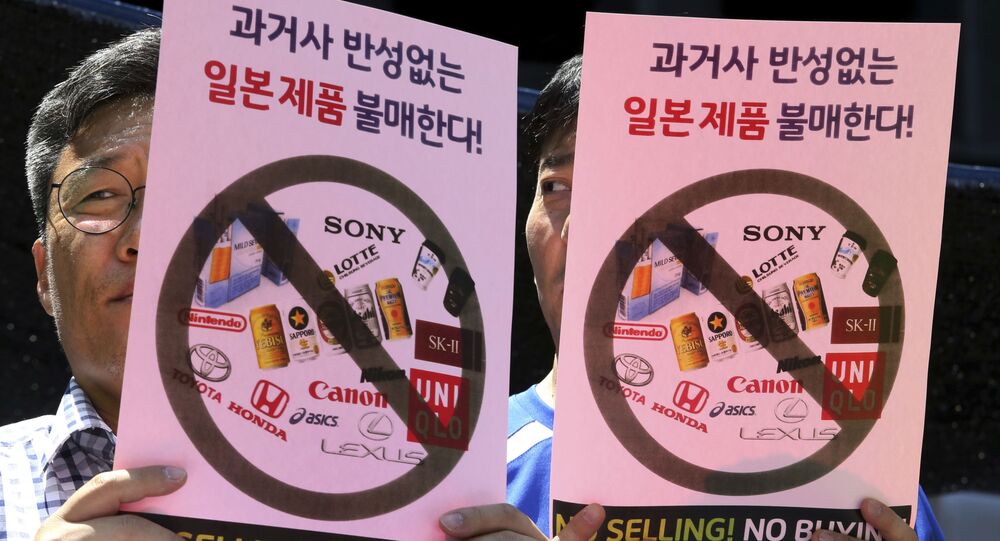 The crisis between Japan and South Korea has moved on to a new level. Seoul responded to Japanese sanctions by accusing Tokyo of supplying Pyongyang with sanctioned strategic goods, including hydrogen fluoride.

The seriousness of the statement can be seen on the backdrop of an earlier instance of the possible sale of this substance by the South to the North, which resulted in Japan imposing trade sanctions on South Korea.

Konstantin Asmolov, a leading researcher at the Centre for Korean Studies at the Institute of Far Eastern Studies of the Russian Academy of Sciences (IFES RAS) has shared his insight on the situation.

“I admit that left forces in South Korean President Moon’s entourage could have resorted to smuggling to Pyongyang. But I can hardly believe that someone in Japan has decided to benefit from trade with the country’s ideological enemy. This is just another war of words in the trade crisis”.

At the same time, the South Korean Yonhap Agency clarified that Japan allegedly committed the offences in 1996, as well as in 2002 and 2008. According to the expert, these time references make Seoul’s charges absurd.

“This is an old story. At the time, there wasn't a tough sanctions policy against Pyongyang. North Korea was not yet an established nuclear power. Japan, on the other hand, blamed South Korea for supplying strategic goods to North Korea at a time when they were under UN sanctions. In addition, the Japanese supplies, which Seoul refers to, couldn't have been made by the Japanese government and authorities, but only with the help of the General Association of Korean Residents in Japan. Seoul has found this information and is now using it as an argument against Japanese sanctions. They say that Tokyo itself has violated the sanctions regime against North Korea”.

It’s believed that the economies of Japan and South Korea are very much interdependent, so the crisis in relations between the two countries will soon be resolved. However, Konstantin Asmolov is more pessimistic about that:

“Before World War I, analysts also thought that European economies were so dependent on each other that no one would go to war. However, it turned out quite differently. Looking back, you realise that the tensions between Seoul and Tokyo began in 2017, if not earlier. Anti-Japanese has become an integral part of South Korea’s state ideology, when in any incomprehensible situation they blame Japanese colonial heritage, demanding incessant repentance. And if the Japanese repent, they pay too little for their repentance. South Korean President Moon Jae-in is now being forced to raise his own ratings, as the South Korean economy is not doing as well as he’d like. This is a fertile environment for accusing Japan of all manners of offences. It’s clear that it is a constant and habitual irritant for Tokyo, but for the first time, the Japanese have decided to respond with sanctions”.

In 2019, tensions between Japan and South Korea escalated due to the claims by South Koreans against Japan’s militaristic past, in particular, the occupation of Korea during the Second World War. The situation was particularly aggravated by Korea’s demand to make “sincere” apologies to “comfort women", and by a dispute over compensation for South Koreans who were forced to work for Japanese firms in wartime.

Recall that the Supreme Court of South Korea ruled that Japan’s Nippon Steel & Sumitomo Metal had to pay compensation.

Since the company had refused to comply with the ruling, the court sanctioned the confiscation of its assets in South Korea. In response, Tokyo said it would tighten restrictions on the export of three materials that are crucial for modern consumer electronics.

As the Japanese Ministry of Foreign Affairs has repeatedly stated, the 1965 agreement between Japan and South Korea regarding the normalisation of relations provided for a $300 million payment on the part of the Japanese, with an additional $200 million provided as loans.

Thus, according to Japan, all claims for compensation regarding property and the rights of individuals and legal entities should be considered finally settled.

Views and opinions expressed in this article are those of Konstantin Asmolov and do not necessarily reflect those of Sputnik.