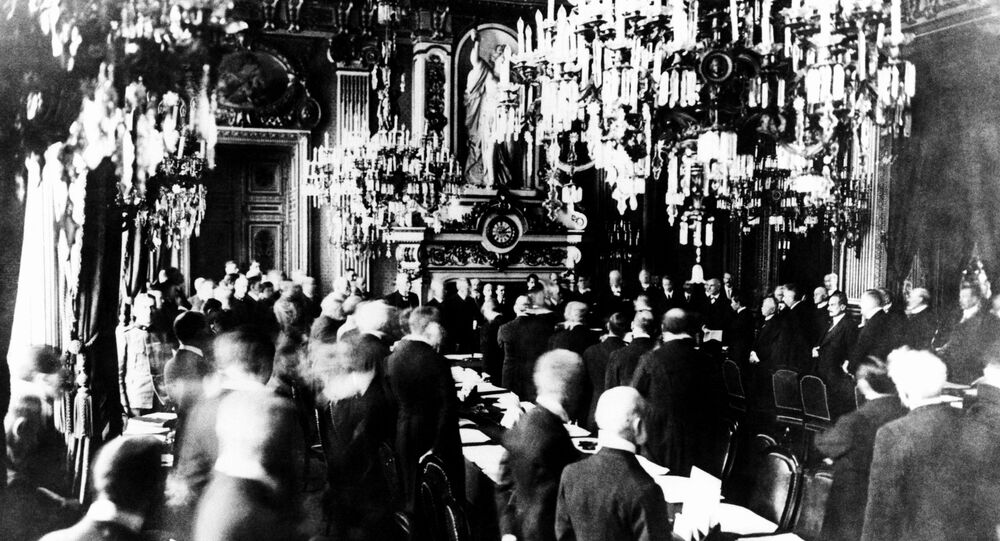 The Treaty of Versailles Was ‘Too Tough on Germany’ - Professor

The Treaty of Versailles was signed on 28 June 1919. It was just one of a series of treaties between the victorious allies and the defeated nations - Germany, Austro-Hungary, Turkey and Bulgaria. Professor Richard Overy explained why Versailles was partly to blame for the rise of Hitler.

Friday, 21 June, marks the 100th anniversary of the moment when the commanders of the former Imperial German Navy scuttled most of the fleet while at anchorage at Scapa Flow naval base in Scotland.

They were enraged by the terms of the Treaty of Versailles.

The day before - on 20 June 1919 - Philipp Scheidemann resigned as Chancellor of Germany’s new Weimar Republic, which he helped establish following the abdication of Kaiser Wilhelm II and the dissolution of the German Empire.

This day 100 years ago 74 ships of the German High Seas Fleet (Hochseeflotte) scuttled, in Scapa Flow, on the orders of their commander Rear Admiral (Konteradmiral) Ludwig von Reuter. 9 German sailors were killed and 16 wounded by the Royal Navy in the confusion that day. pic.twitter.com/vZNqOFxrho

​Scheidemann, a Social Democrat, believed the treaty was unfair to Germany and he refused to sign it.

"The treaty was certainly too tough on Germany - and later treaties were tougher still on Austria and Hungary - but it reflected the mood at the time that there must be visible punishment to recompense for the horrors of the conflict. Recall, too, the Brest-Litovsk Treaty imposed (by Germany) on Russia, which was punitive in the extreme."

As for the scuttling of the German fleet, which led to the deaths of nine sailors, Prof. Overy noted that there had been plans since May 1919 to sink the ships, and he said the admirals saw it as "an honourable challenge to the shame of surrender."

Next Friday, 28 June, marks the 100th anniversary of the signing of a document which would draw a line under the First World War - which was then known as the Great War - but historians have long argued about whether it also sowed the seeds for the Second World War.

In 'Scapa Flow, The Account of the Greatest Scuttling of All Time', Rear Admiral Ludwig von Reuter writes...
The internment weighed on us all. Still, what comradely friendship could not give us, and what the hate of the enemy could not rob us of, was the beauty of Scapa Flow... pic.twitter.com/UoJ1SqE3pS

​Scheidemann’s successor, Gustav Bauer, came under intense pressure to sign the treaty but refused to unless Articles 227, 230 and 231 were removed.

Article 227 said the former Kaiser should be prosecuted "for a supreme offence against international morality and the sanctity of treaties" while Article 231 concerned 132 billion gold marks ($US33 billion) in reparations.

The Allies responded by sending Bauer an ultimatum - he either signed the treaty or British and French troops who were already occupying the Rhineland would invade the rest of Germany.

#Germany concedes and agrees to sign the Treaty of Versailles. In protest and disgust, Philip Scheidemann resigns as PM and takes his whole cabinet with him. pic.twitter.com/exRQrUZPCK

Prof. Overy said: "Scheidemann resigned for obvious reasons, he could not cope with ushering in a new democratic age and then having to sign a punitive treaty. His successor's government was forced to sign because the Allies made clear the cost of not doing so - continuation of the blockade, possible occupation of Germany. Because of the state of German society and economy by mid-summer 1919 there was really no alternative.”

One of the aspects of the treaty which caused the most hurt in Germany was the so-called War Guilt Clause, in which Berlin was forced to admit it had been responsible for the war.

​Germany’s Foreign Secretary, Ulrich von Brockdorff-Rantzau, gave a speech in May 1919 when he told his audience, which included the allied leaders Georges Clemenceau, Woodrow Wilson and David Lloyd George: "We know the full brunt of hate that confronts us here. You demand from us to confess we were the only guilty party of war, such a confession in my mouth would be a lie.”

Von Brockdorff-Rantzau resigned on the same day as Scheidemann.

Prof. Overy said: “For the German people I think the most difficult thing to accept was war guilt. The sense of shame for being regarded unjustly as an international criminal affected all classes. Disarmament and reparations were both deeply resented, but the argument that they deserved these punishments for being morally in the wrong to start with was never accepted, even on the left. Hitler's regime traded on the promise to restore 'national honour'.”

The territorial terms of the Treaty of Versailles were actually fairly generous - although Germany lost its colonies in Africa and Asia it retained most of its land in Europe.

Treaty of Versailles Centennial: Negotiations in Paris https://t.co/o8nyki0R1U This year is the Centennial of the signing of the #TreatyofVersailles. The Peace Palace Library has put together a collection of books exploring the background and aftermath of the #VersaillesTreaty pic.twitter.com/7RS71zeevb

​Alsace-Lorraine was given back to France, a strip of territory known as the Polish Corridor was handed over to Warsaw and Danzig was made into a “free city” but the territorial changes were fairly minor compared to the Treaties of St Germain and Trianon which dismembered the Austro-Hungarian Empire and the Treaty of Sevres, which tore up the Ottoman Empire and was planning to slice up Anatolia until Kemal Ataturk put a stop to it.

The Treaty of Trianon was the peace agreement of 1920 to formally end World War I between most of the Allies of #WWI and the Kingdom of Hungary, the latter one of the successor states to Austria-Hungary. The treaty regulated the status of an independent Hungary and its borders. pic.twitter.com/LTNAk6TJs6

​Prof. Overy said the British, French and American leaders had conflicting views of how to deal with Germany after the First World War.

He said: “Lloyd-George might well have accepted a less punitive peace but was well aware of opinion at home while Clemenceau was old enough to remember (the Franco-Prussian War in) 1870/1 and wanted no compromise with the punishment meted out to the Central Powers. Wilson played an ambivalent part, not willing to break with his Allied partners, keen to redraw the political map of Europe through self-determination - which of course never happened fully - and uncertain about domestic opinion in the United States. He ought certainly to have done more to restrain the punitive appetites of his colleagues.”

This was the ottoman empire before the treaty of sevres. #Versalles100 pic.twitter.com/DBSllWyyIZ

​The Netherlands refused to extradite the Kaiser to face trial and he died in Holland in 1941, after Hitler's armies had invaded the Low Countries.

Brian Alexander, who runs Kirkwall Walking Tours in the Orkney Islands, said the remaining German sailors were sent to a prisoner of war camp near Invergordon before eventually being repatriated to Germany.

Mr Alexander said: "Most of the fleet were salvaged for scrap between the wars by Cox and Danks. There are seven wrecks still in the Scapa Flow. Three belong to the Orkney Islands Council and four are currently up for sale by a on eBay."