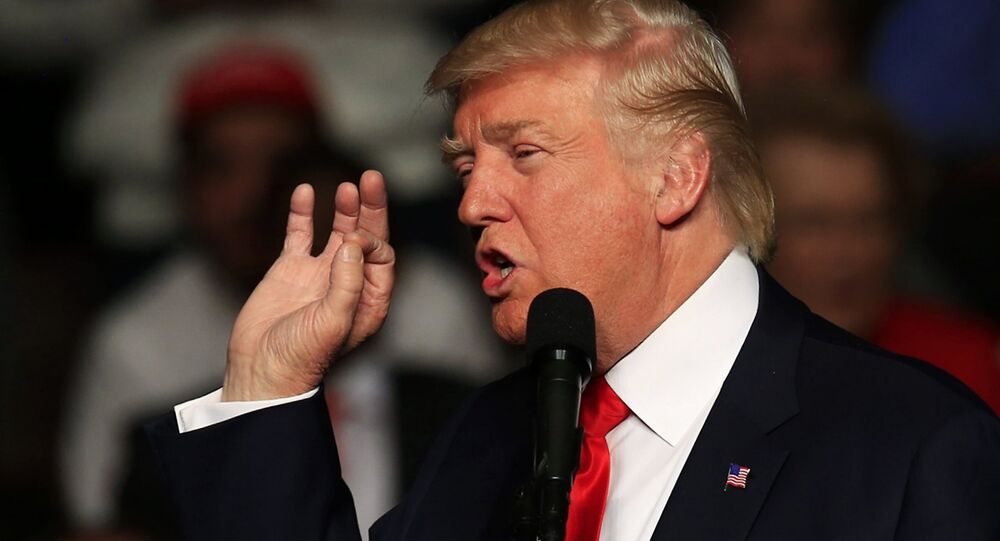 An Indian economist opines that suspending India from the Generalised System of Preferences (GSP) is a no-win situation at best, and at worst, the US stands to lose the most as no longer having access to Indian exports could increase costs for American manufacturers and push up prices.

New Delhi (Sputnik): As US President Donald Trump moves ahead with his plan to bring an end to the Generalised System of Preferences (GSP) for India in early May, a trade war could be on the cards. As it would effectively hit $5.6 billion worth of Indian exports covering 5,111 tariff lines, officials in New Delhi are reportedly considering retaliatory tariffs on US exports to India.

However, economists on either sides opine that a possible "trade war" between Washington and New Delhi would lead to a no-win situation for both countries.

Trump has long been a vocal critic of New Delhi's trade policies, calling them the "tariff kings" for not complying with his efforts to open up the Indian market for American companies."I am taking this step because, after intensive engagement between the United States and the Government of India, I have determined that India has not assured the United States that it will provide equitable and reasonable access to the markets of India," Trump said.

© AP Photo / Susan Walsh
Trump Says Washington to Terminate India, Turkey Duty-Free Status
Trump, it is believed, is also agitated as India placed new rules on US e-commerce firms, including Amazon.com Inc and Walmart Inc-backed Flipkart. Earlier, in a report which had an in-depth study on the global trade barriers, the trade department of the US mentioned India as having the highest tariffs "of any major world economy", with an average of 13.8 per cent.

Since 1976 India has been a beneficiary of the GSP, a system which sets zero tariffs on certain goods for a set of 120 developing countries with the aim of fostering trade and economic development between the US and developing nations.

The Indian Commerce Ministry tried to play the matter down with the Commerce Secretary Anup Wadhawan saying "The withdrawal of GSP benefits to India will have a minimal and moderate impact," and stated that even if the tariffs are imposed, they would be as low as 4%.

However, one needs to keep in mind that a lot of Indian exports are labour intensive and have very thin profit margins. Thus, even small duties can result in huge losses and potential render some businesses unprofitable, particularly if their main market is the US.

© CC0
Prof on US-India Trading Relations: There's Major Concern in India
Akash Jindal, a New Delhi-based economist specialising in US trade is of the opinion that while the move will have considerable ramifications for India, the US will also be adversely affected.

"Many of the goods that we produce here in India and export to the US primarily consist of engineering goods which are used by them as raw materials. Therefore if they increase the tariffs, their own products will become costlier as well. In this matter of a tariff war, only India cannot be blamed, the US too should have kept in their mind that India has always played a good friend to them and the relationship that goes beyond trading between the two countries could be impacted as well if a trade war is initiated between the two countries," Aksah Jindal told Sputnik.

The concern for domestic goods becoming more expensive under a tariff regime has also been echoed in the US. Earlier, in a letter addressed to US Trade Representative (USTR) Robert Lighthizer, from Senators John Cornyn of the Republican Party and Mark Warner of the Democratic Party, they wrote "While we agree that there are a number of market access issues that can and should be addressed, we do remain concerned that the withdrawal of duty concessions will make Indian exports of eligible products to the United States costlier."

While New Delhi has been mulling imposing retaliatory tariff on the US for quite some time now, the Indian government has time and again extended the deadline, and it is unclear if they will eventually make a move and risk further tariffs or even sanctions.

India Postpones Retaliatory Tariff on US Products by 45 Days