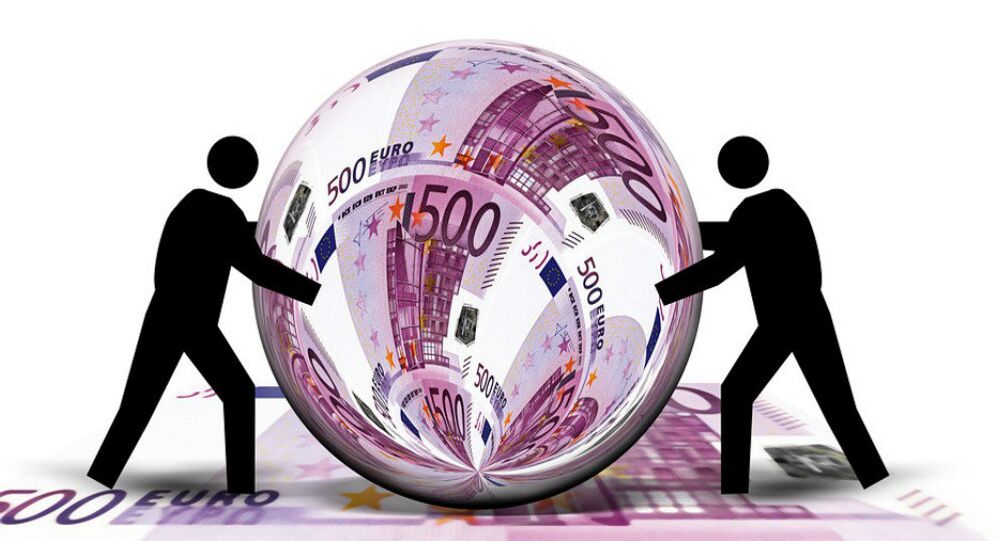 UK's contributions currently make up almost a tenth of the EU's budget. Sputnik spoke to Professor Iain Begg, from the London School of Economics, about how the EU's budget will be affected by Brexit.

Britain is on the brink of crashing out of the European Union in an disorganised heap after months of political bungling.

On Thursday, 21 March, after eight hours of talks, EU leaders offered to delay Brexit until 22 May if Parliament approves Theresa May's deal at the third attempt.

If they do not the EU will grant an extension until 12 April and said Britain could leave without a deal.

But what will Brexit mean for the EU's budget?

The bloc's current annual budget is around 165 billion euros (£143 billion) and around nine percent of that is made up of the British contribution.

The EU is currently in the process of putting together its budget for 2021-2027 and it has already factored into the equation Britain leaving.

Iain Begg, a professor at the European Institute at the London School of Economics, wrote in a recent paper for Funcas that in recent years the UK's net annual contribution had been between 10 and 12 billion euros (£8.7 and £10.4 billion).

"Because of the way the EU raises its revenue, through a formula that adjusts national contributions to meet agreed spending, Brexit will not mean a financing problem in the narrow sense of an inability to raise revenue. But what it necessarily implies is a redistribution of the burden among the EU27," he wrote.

Who Will Make Up Shortfall After UK Quits?

So who is going to be asked to cough up more?

France and Germany have reportedly agreed to share more of the burden.

"(President) Macron said that, on the assumption that Britain is out, we are prepared to pay a bit more," Prof. Begg told Sputnik.

He said Macron's remarks did not have huge political repercussions because the next EU budget process seems "quite distant" but he said the issue could expect to "come to a head" at a summit in October.

Another group — Austria, Denmark, Sweden and the Netherlands — are known as the "Frugal Four".

Denmark's finance minister, Kristian Jensen, has refused to pay any extra into the EU budget — "not a krone more."

"They will be forced to pay a little bit more," Prof. Begg told Sputnik.

"It ties in with the debate about rebates. The Frugal Four are keen to retain their rebates but the EU wants to get rid of rebates, using Britain's departure as the mechanism," Prof. Begg told Sputnik.

Since 2015, #investEU has been delivering jobs and growth with almost €390 billion of investment mobilised.
929,000 small and medium enterprises are set to benefit from better access to finance.
More #EFSI results → https://t.co/4o9bxfzX2U #JunckerPlan pic.twitter.com/ra5JVPR7EZ

He said the European Commission wanted to phase out all rebates within five to seven years.

But he said there would be tough negotiations down the line and the Frugal Four were in a strong position because the EU budget had to be agreed unanimously.

Poland, Romania and Hungary Have Profited from EU Budget

Prof. Begg said the current budget, for the years 2014-2020, included a lot of regional development grants to poorer areas of Poland and Romania.

"But the biggest winner was Hungary," Prof. Begg told Sputnik.

He said there was always quite a bit of "sophistry" involved in putting together the EU budget and different countries were pulling in different directions.

Greece and Italy, for example, both wanted big increases in the amount spent on migration and border management, which is set to be only three percent of the total budget in 2021-2027.

The biggest — making up 34 percent of the MFF for 2021-2027 — is earmarked for "cohesion and values", which includes everything from bridges and roads to protecting the euro from counterfeiting and "support for the Turkish Cypriot community" on the divided island of Cyprus.

The second largest chunk, "natural resources and environment", counts for 30 percent of the budget and includes the Common Agricultural Policy, the biggest beneficiaries of which are French farmers, to the tune of seven billion euros.

Britain Could Still Be Getting EU Grants Right up Until 2024

Britain is facing a divorce bill of 42 billion euros (£36.5 billion), which will mean the UK will be paying into the EU coffers for some considerable time.

Here in a nutshell the provisional agreement of Horizon Europe between the EU institutions. Investing in research and innovation is investing in Europe's future, in knowledge and new solutions to maintain and improve the European way of life. #HorizonEU #FutureofEurope pic.twitter.com/BWb7oOBKFn

But what is rarely mentioned by Brexiteers is the money coming into the UK from European development and research grants.

Places like Cornwall and west Wales, which ironically voted strongly to Leave in the 2016 referendum, actually do very well from EU grants.

"Although some research grants may last until 2024, the bulk of the grants from the EU will have been spent by 2022," Prof. Begg told Sputnik.