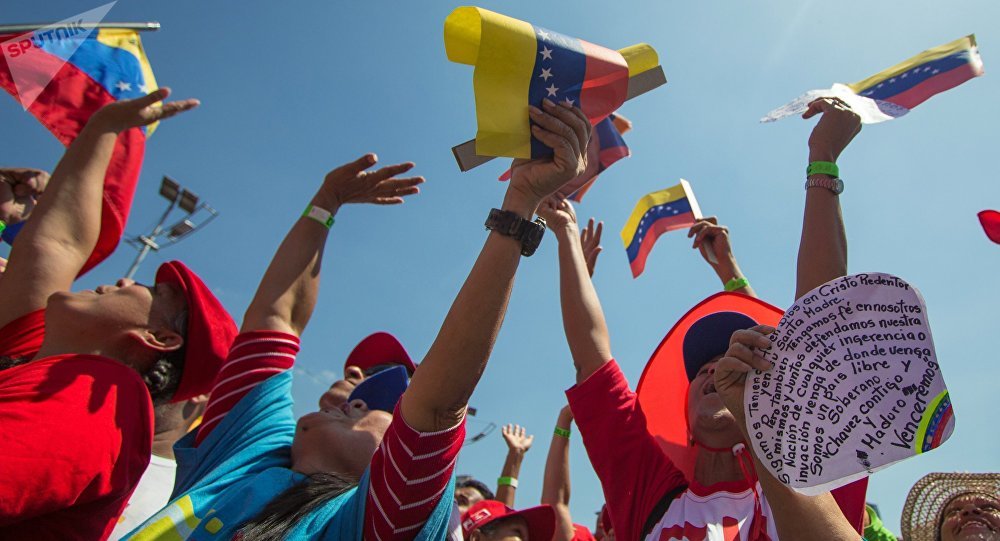 US Secretary of State Mike Pompeo said that Venezuela's President Nicholas Maduro is a 'sick tyrant', whose days 'are numbered'. This comes after two people died in clashes between civilians and military in Venezuela on Saturday. The troops were blocking trucks filled with US aid from crossing the border with Brazil.

Sputnik discussed the latest developments in Venezuela with Julia Buxton, Professor of Comparative politics at the Central European University.

Sputnik: What are your thoughts on the crisis in Venezuela?

Julia Buxton: We're at a very difficult situation, at a critical point. The main challenge we have right now is that the United States seems very intent on advancing a military solution to the political crisis in the country rather than negotiations, so these are very difficult and very dangerous moments for Venezuela.

Sputnik: What do you make of the statement made by Mr. Pompeo about the Venezuelan president about his days being numbered?

Julia Buxton: Well we also saw some pretty astonishing tweets from Marco Rubio over the weekend, as well, alongside Secretary of State Pompeo. I think the problem with these messages which are coming out from Washington is that they are really backing the United States into a corner, they're making the opportunity for dialogue very, very slim, and they're attempting obviously to innerve the Maduro government and obviously to encourage defections from the military. But these are having no effect whatsoever, they've been quite counter-productive, and if anything, they seem to be welding the military more closely to Maduro. 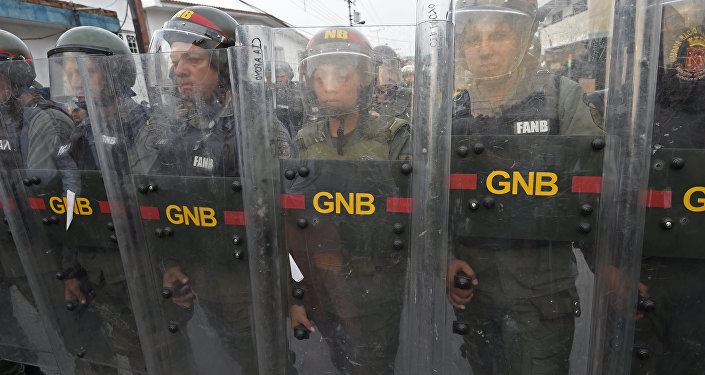 © AFP 2019 / JUAN BARRETO
Mexico Calls on All Sides to Venezuelan Crisis, Including External Parties, to Reject Using Force
Sputnik: The European Union has said that military intervention in Venezuela must be avoided, what's your take on that?

Sputnik: So do you think Washington will heed Brussels' call?

Julia Buxton: I think right now the problem is that the United States is unilaterally going down a single track, it does have some support from a number of Latin American countries, particularly, Columbia and Brazil, but the reality is that no Latin American countries are really going to want to see any form of US military intervention, direct US military intervention. But the challenge right now is trying to hold back the US, which seems to be really following a stream of its own energy and really not listening to any of the other countries around it.

Sputnik: How legal is it for a third country to get involved in the affairs of another country?

Julia Buxton: The clear challenge here is that this is a violation of Venezuelan sovereignty both in trying to deliver this so-called aid into Venezuela but also enforcing this regime change. There have been really serious challenges with the constitutional situation in Venezuela and the electoral and political situation, but the reality is that both the government and the opposition can only really stabilise the situation in the country if they talk and if they don't talk we're going to carry-on becoming more polarised and the biggest victims here are going to be Venezuelan civilians.

READ MORE: Guaido Plans to Return to Venezuela From Colombia This Week — Reports

Sputnik: Professor, as mentioned earlier, President Maduro claims that this aid is a ploy to topple his government; how much truth is there in his claim?

Julia Buxton: Well I think that the Maduro government is being incredibly sceptical about this aid, largely because this is USAID, this is coming from the United States. The Red Cross and a number of humanitarian organisations have been very concerned about the over-politicisation of this aid that the US is trying to get in, the reality from a practitioner perspective is that there has been no assessments of needs, there's been no guarantee that the aid will be targeted at those who need it most or that it won't end up in the hands of soldiers or civilians who will take it back over the border to Colombia and sell it. So I think the Maduro government is deeply sceptical, probably for very different reasons as to why I'm sceptical, but you can see the real serious challenges of trying to deliver aid without the support of a government.

Sputnik: In your view why are countries like Brazil and Colombia supporting the US stance on this?

Julia Buxton: Because what we have in Brazil and Colombia are two right-of-centre governments: Ivan Duque in Colombia and Jair Bolsonaro in Brazil. Bolsonaro, in particular, is very, very close to the White House, Duque spent many years in Washington; these are very much Washington's men in Latin America. They've come to power themselves on the back of rejection of and constitutional manipulation against the left-wing government in the case of Brazil, and the peace process in the case of Colombia. So they're very much Washington's men in Latin America at a very difficult time for the Latin American left.

Sputnik: Professor, do you think Mr. Maduro's government would be able to withstand isolation and sanctions if Washington introduces these punitive measures?

Julia Buxton: If Washington extraterritorialises the sanctions, which means that other countries will also be prevented from getting aid and assistance and very important things such as oil diluents which Venezuela needs in order to refine its domestic oil. If these are prevented from coming in, then I think the situation is going to deteriorate very quickly, I think in a matter of days. This will really raise some moral questions about the way that Maduro was displaced by the US, which essentially would be through starving Venezuelan citizens.