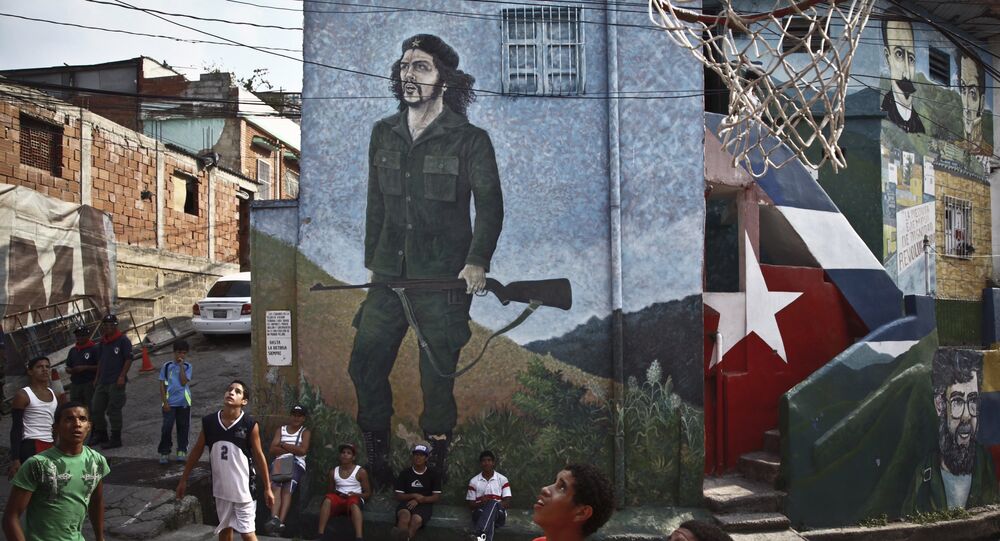 MOSCOW (Sputnik), Tommy Yang - Ongoing political crisis in Venezuela is unlikely to damage its financial ties with China, which has invested heavily in the South American country’s oil industry, as Beijing will continue to work with the oil-rich nation regardless of the result of the political struggle, experts told Sputnik.

Venezuela opposition leader Juan Guaido declared himself as the interim president of the country on Wednesday, amid the latest round of widespread anti-government protests. US President Donald Trump issued a statement shortly afterwards, officially recognising Guaido as Venezuela’s interim president. A number of neighbouring countries, including Argentina, Brazil, Canada and Colombia, have followed the US position in supporting Guaido.

© REUTERS / Andres Martinez Casares
Timeline of Political Instability in Venezuela Over the Years
In response, the current government in Venezuela, led by President Nicolas Maduro, has shown defiance by announcing to cut diplomatic ties with the United States. A number of countries including China, Russia, and Turkey have expressed support for Maduro and called on the international community to avoid interfering with Venezuela’s domestic affairs.

Over the past decade, China offered about $50 billion to Venezuela through oil-for-loan agreements. During Maduro’s most recent visit to Beijing in September 2018, China agreed to extend an additional $5 billion credit line to Venezuela to finance oil projects.

"No matter who takes power in Venezuela, China will continue to try to maintain a friendly relationship. It’s very similar to the situation in Brazil, where after a right-wing politician who holds anti-China views took office, Beijing still had to try to develop a good relationship with the new government", Zhang Baohui, the director of the Center for Asian Pacific Studies at Hong Kong's Lingnan University, told Sputnik.

The expert explained that Venezuela’s economic troubles would force the new government to work with China and continue to rely on Chinese financial assistance.

© AFP 2021 / Federico PARRA
There Will Be No Snap Election in Venezuela - Envoy to Russia
The expert added that this kind of bilateral relationship between China and Venezuela is unlikely to change unless the United States decides to offer heavy economic assistance to the new government, which is also very unlikely given the financial troubles the US government is in.

"Even if you change to a new government in Venezuela, you still need to rely on revenues from selling oil. From this perspective, the new government is unlikely to do anything disruptive. The issue is what else do you turn to if you don’t rely on oil?" Lin Boqiang, director of the China Institute for Studies in Energy Policy at Xiamen University in southeastern China, told Sputnik.

The Xiamen-based scholar pointed out that it is unlikely for any new government in Venezuela to cut ties with Chinese oil companies because such actions would also scare off Western investors if they choose not to honour contracts with Chinese companies.

"There’s a lot of potential for Venezuela to expand its oil production capacity, as it has the world’s largest oil reserves in the world. But if they decide to touch Chinese oil companies, other foreign companies would be unwilling to invest in the country, because they wouldn’t feel safe about their investments", he said.

Despite China’s heavy investments in the country, it is unlikely for Beijing to intervene directly in the political struggle in Venezuela, professor Zhang from Lingnan University suggested.

"China will definitely voice support for Maduro. But there’s nothing else China can do. The situation in Venezuela could easily move toward civil war. It depends on how much the West, especially the United States, will support the opposition leader who claimed to be president and whether they’ll decide to intervene. There’s very little China can do. At best, Beijing can issue a statement to support Maduro. If a major political change will take place [in Venezuela], I don’t think China would want to get involved more, because it can’t really dictate the results", he said.

The expert explained that China will not respond to possible US military intervention in Venezuela, because the Latin American nation does not really touch Beijing’s core interests.

"If the political crisis lingers on and the current government faces economic troubles, China could provide more loans to support the Maduro administration and help it survive. But as the situation in Venezuela has developed into a serious crisis and a civil war could emerge with US military intervention, China can’t really do anything if it happens. Compared to Russia’s position in Syria, China has a completely different attitude on Venezuela. That’s because Syria is part of Russia’s core interests, that’s why Russia needs to get involved. But Venezuela is neither China’s nor Russia’s core interests. This is the biggest difference", he said.

At the same time, Chinese leaders could breathe a sigh of relief if the Maduro administration loses the power struggle, Zhang added.

"The current government is almost like a bottomless hole for China. No matter how much money China offers, it’s still impossible to solve Venezuela’s financial woes. If the current government collapses, it could become a relief for China, as the current government often came to the Chinese leaders for financial assistance. Maybe China wouldn’t view the collapse of the current Maduro administration as a bad thing. As Venezuela continues to struggle economically, the new government will be forced to maintain a good relationship with China. That’s why China doesn’t have to worry too much right now", he said.

© REUTERS / CARLOS EDUARDO RAMIREZ
Protests in France and Venezuela - Spot the Difference
Despite Maduro’s decision to cut diplomatic ties with the United States and order US diplomats to leave within 72 hours, US Secretary of State Michael Pompeo issued a statement on Wednesday stressing that Washington will continue to maintain diplomatic relations with Venezuela through interim president Guaido and vowed to "take appropriate actions to hold accountable anyone who endangers the safety and security of our mission and its personnel".

Views and opinions, expressed in the article are those of the scholars and do not necessarily reflect those of Sputnik