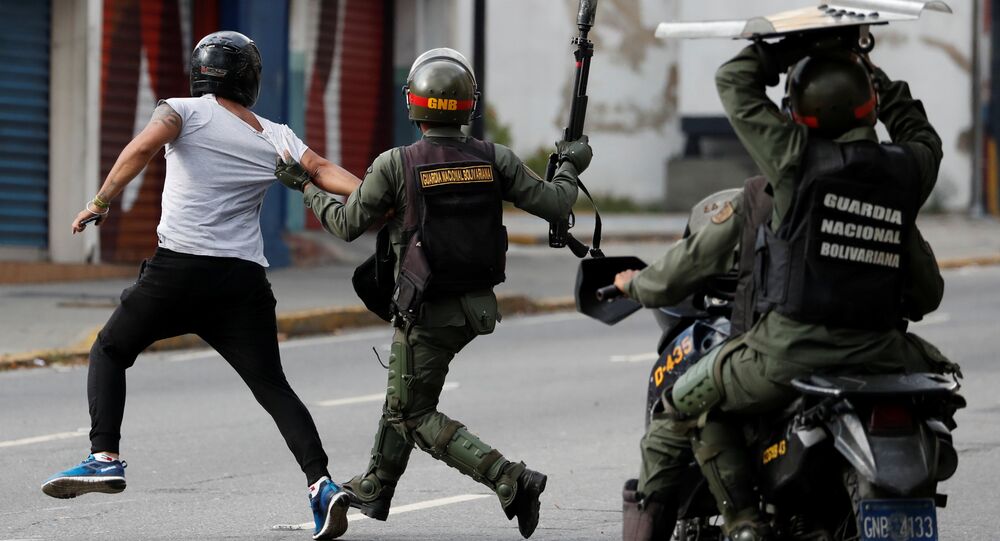 MOSCOW (Sputnik) – Those interested in further destabilizing the situation in Venezuela may be seeking to use social networks as a powerful tool for sowing discord and spreading fake information, while first such attempts seem to be already taking shape, experts told Sputnik.

As protests broke out in Venezuela amid escalated tensions between the government and opposition, reports emerged on social media, claiming that that half of the Venezuelan armed forces sided with the opposition. The allegations remained unconfirmed, but the practice of spreading fakes in social media has already been widely used in several conflicts across the world.

Soon, some social network users claimed that Venezuelan President Nicolas Maduro’s profiles on Facebook and Instagram have lost a blue verified badge, a special icon meant to confirm the authenticity of the pages of a public person or a celebrity. Both social networks later said that Maduro never verified his accounts in the first place.

"Of course, such technologies [social media] are used to destabilize the situation, especially when there is a lack of information. Of course, such information in social networks affects the mood of the security forces. It is possible that this is a provocation [to sow] a split among security agencies and the army. This technology is used quite often," Nikolai Mironov, the head of the Center for Economic and Political Reform (CEPF), told Sputnik.

He added that social media had long ago been engaged in politics and turned into "one of the most powerful political resources," capable of mobilizing large audiences.

"It is quite possible that Facebook uses these technologies, especially as the Americans have officially declared that they support another figure, [Guaido]. Of course, they will use all possible instruments for destabilization, including the social media to mobilize the population for protests. Obviously, we will see powerful endeavours to do it through social networks, going as far as blocking accounts of people who support the president and using a bot army," the expert explained.

Alexey Martynov, the director of the International Institute of the Newly Established States, shares a similar opinion. He recalled that social media was actively used in preparation, organization, and implementation of coups across the globe.

According to Martynov, the main emphasis in the preparation of such events is now made not on the brutal force — as was the case in the 20th century — but on the social mobilization of people, who are encouraged to take to the streets and join one of the sides.

"We had been witnessing this sort of things in almost all coups that were, to one or another extent, partly organized with the assistance of the so-called western think tanks, various funds, analytical groups under the aegis of Western governments and special services. We can clearly witness it in the post-Soviet countries, right next to us," Martynov said, citing the events that rocked Ukraine in 2004 and 2014 and resulted in power changes.

© AP Photo / Ludovic Marin
EU Supports 'Re-Establishment of Democracy' in Venezuela - Macron
On Wednesday, Venezuela's opposition leader Guaido declared himself the country's interim president. The United States formally recognized Guaido and demanded that Maduro, whom it no longer considers to be the legitimate head of state, prevent violent actions against the opposition.

Maduro, in turn, insisted that he was the country's constitutional president and called the opposition leader a puppet manipulated by the United States. He accused the latter of attempting to stage a coup in Venezuela and announced the decision to cut off diplomatic ties with the country.

READ MORE: There Will Be No Snap Election in Venezuela — Envoy to Russia