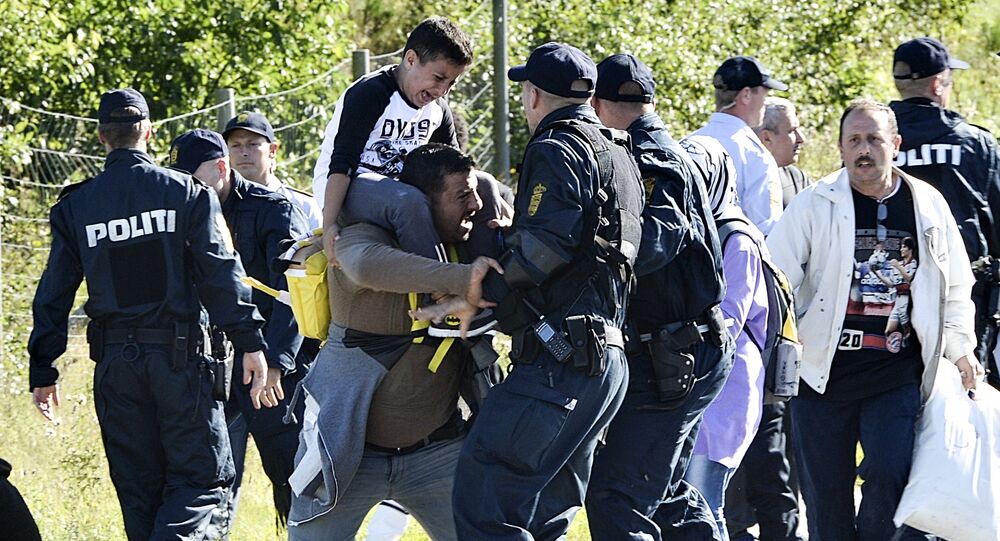 Sputnik: Is sending migrant criminals to this island a genuine solution to the issue?

Christine Tasin: At the moment, as the EU and "human-rightists" call the shots in Europe, this is the single possible solution, even if it is temporary.
As a result, for the traitor leadership of the EU, protection of foreigners has become a priority and is currently even more important than the security of Europeans.

In France in 2003, President Sarkozy, under the pressure of leftist organisations, renounced the implementation of what was dubbed by opponents "the double penalty" (prison sentence for criminals and expulsion to their country of origin, after the term expires).

The European Court of Human Rights has often ruled in favour of perpetrators and criminals, who were to be expelled, by finding many good reasons not to deport them to a home country.

This solution is provisional, until Denmark switches to the same laws as Italy. In France, we hope that soon our government will decide to protect its own citizens and get rid of foreign criminals, who have nothing to do in our country.

Sputnik: The island is said to be home to a facility researching infectious animal diseases, and many politicians have therefore called this ‘inhuman politics'. What is your stance on this situation?

© REUTERS / Benoit Tessier
France Subjected to Massive Islamization by Muslim Brotherhood – Activist
Christine Tasin: All over the world there are research laboratories. Those, who work there and those, who live nearby aren't infected and don't risk anything.

There is no problem. Do those, who reject this inhuman policy, actually care about health disorders of those living close to wind turbines?
In addition, I have no compassion for illegals, who not only broke into our country, but have also been stealing, raping and killing.

They aren't humans any more. It's not for us to pay with our blood or our money for the foreigners in the country. If it brings a little bit more risk than the European way, I don't see it as a problem. We do everything to treat a criminal equally to a victim.

Sputnik: This could serve as a solution to the situation where Denmark can't expel migrants with a criminal record from the country. Is there really no other way to combat migrant inflows?

Christine Tasin: Of course, there are other solutions… But they can be implemented only in a country that leaves the EU, because the union has been prohibiting the expulsion of illegals in the name of human rights, increasingly frequently.

© AP Photo / Martin Lehmann
Denmark in Diplomatic Deadlock With Iran Over Muhammad Cartoon - Reports
Other solutions are simple: restoration of borders (abolition of the Schengen zone), restoration of national sovereignty that will allow people to decide who may enter, who may stays and who should be expelled.

This island is the second-best solution, but at least the Danish will be safe from the most dangerous illegal migrants. Security is priceless.

Sputnik: With such measures being pushed by European countries and supported by the public, what does this say about Europe's true attitude toward migrants?

Christine Tasin: Unfortunately, at the moment, the majority of the European countries, led by France and Germany, are mostly "pro-migration" and "pro-humanrightist". We're paying the price. Such a price that for us, activists fighting immigration and islamisation of our country, the word "pro-migrationist" is offensive…

The people are waking up. It's about legitimate defence and precautionary principle, the refusal to sign the Pact of Marrakesh by many countries: Austria, Hungary, Czech Republic, Slovenia, Estonia, Lithuania, USA, Israel, Australia, Switzerland… And this pact will be renounced by president-elect of Brazil, Bolsonaro, shortly after he assumes his post.

Uncontrolled immigration is a disaster, which endangers not only the security of our children, but also our identity and our civilisation. Long live the islands where we deport the unwanted, who no one knows what to do about!