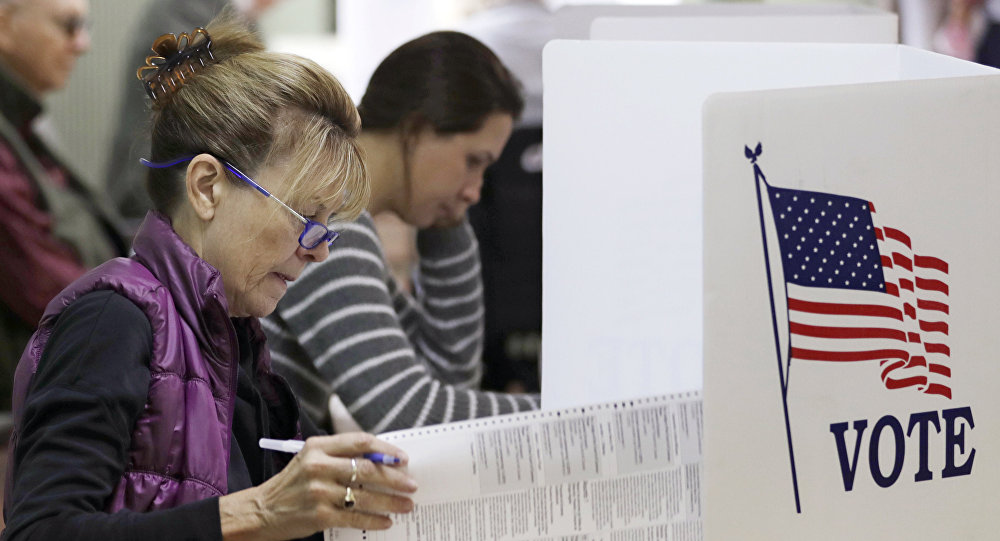 'Democrats Do Not Understand Reality on the Ground' - Republican Candidate

Americans will go to the polls on Tuesday to elect regional representatives, including governors, both houses of US Congress, state legislatives, mayor and city councils.

Sputnik discussed Trump's tax cuts, among other reforms and the main issues of the US midterm election with Jitendra Diganvker, Republican candidate for Illinois' 8th Congressional District in the US House.

Sputnik: How have some of the President's reforms impacted your district and if elected what's your first priority?

© REUTERS / Shannon Stapleton
Majority of US Voters Confident in Accuracy of Upcoming Midterm Tallies - Poll
Jitendra Diganvker: It is my honor and privilege to be on Ratio Sputnik live talking about the elections. President's plan is helping every hardworking American; it supports small businesses, it supports every employee. Employees are happy getting jobs, getting raised, and getting new opportunities. There're a lot of positive vibes on the ground. I'm very confident, I'm a regular guy, not a politician; and I want to represent the common man in Illinois' 8th District, and I'm very happy about it. When elected, I will be supporting every common man; and my major concern is to make sure that we provide help for every American.

Sputnik: Your opponent spoke out against Mr. Trump's tax cuts claiming that they were neither fair nor fiscally responsible; how do you respond to this?

Jitendra Diganvker: President's tax plan is supporting the entire economy, all the small and big businessmen; this tax plan is refueling that growth in the economy. My opponent is a product of the political machine; he doesn't have any independent voice and he supports only a special interest group and he really doesn't represent any common man. He is totally disconnected with common man's life of today; I'm a common man and a small businessman, I understand how the small savings help small families and if you make an additional $100-200 a month, that's big money for every small man.

Sputnik: You yourself have said that the Democrats' intent is not for the growth of the nation; what exactly do you mean by that?

Jitendra Diganvker: I feel that Democrats talk sweet but they don't understand the reality on the ground, and they don't understand the plan that helps the people, they only talk about the plan, but they don't represent the plan on the ground. That is not in their interest representing the healthcare issue; they don't want to address economic issues, they don't want to address the national safety and security issue. They all believe in getting funding [inaudible]. They got this Congress, they were focused more on the impeachment of President Trump and that means that American growth will be at stake at this point which means small families and businesses' growth is also at stake. And the nation's priority issue will be the secondary priority; I wouldn't like to see that. I want our core issues to be the first priority.

Sputnik: Most media outlets have been criticizing Mr. Trump for anything he does; what's your take on how the President has been doing his job?

Jitendra Diganvker: In my opinion, the President is doing an excellent job. Our economy is growing, our global partners and allies are understanding our priorities; we are developing good business plans with USMCA, North Korea and South Korea are talking; we are talking to China to balance fair trade and we're interested in keeping good relations everywhere where we can have a sustainable progress and the main peaceful process. That's what we believe in, and that's what I believe in. The President is so successful in his first term, and I think that the Democrats don't like that, so all the liberal media like to criticize all President's good plans, that's what I personally feel. Again, I'm not a politician, I'm a common man, so I'm talking to you at a common man's perspective and what I'm hearing on the ground.

Sputnik: Earlier, you and your opponent discussed the Mueller investigation where you challenged the motivation behind it; how much has the investigation damaged the Republican Party?

© Flickr / Stephen Melkisethian
The Top 10 Scandals of the 2018 US Midterm Elections
Jitendra Diganvker: I think every investigation, if it's a fair investigation, should happen because we don't want any foreign government or any foreign forces interfering in our national issues; that's not good, that's an […] on Democracy. I don't think the investigation is hurting any American reputation. At the same time, if the investigation has a wrong motivation, I don't agree with it. If the investigation goes on for four or five years I don't see it as a good sign.

Sputnik: Immigration has become the central issue in this election; in your opinion, why did Mr. Trump focus more on immigration rather than his achievements, for example, growing economy?

Jitendra Diganvker: President has really prioritized economy and I think that is our core issue. Immigration in this country is based on the legal immigration process and we support the legal immigration process. Since we have a decent amount of citizens who have migrated from other countries, I myself am a product of migration, as I came from India; I followed the process and waited for five years to come into the country. I work hard to achieve my American dream. So, the President is enforcing the law to have a proper immigration process so everyone can be accommodated with genuine practice.