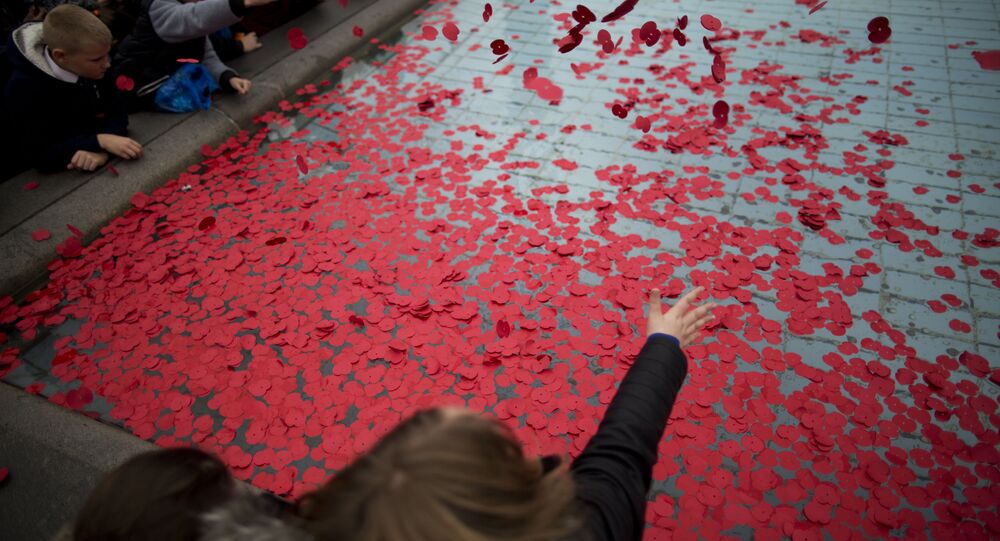 Sales of white poppies - which are made by the Peace Pledge Union - have soared by 30 percent this year. Sputnik spoke to the Royal British Legion, which makes the traditional red poppies, about the row over which color people should wear in the run up to Armistice Day.

Last month Conservative MP Johnny Mercer — who represents a constituency in Plymouth, one of the strongholds of the Royal Navy — said white poppies were "attention-seeking rubbish".

On Sunday, November 11, millions of people around the UK and in other countries will be taking part in ceremonies to mark the 100th anniversary of the end of the First World War.

The First World War claimed the lives of 886,000 British servicemen, mostly in the trenches of the Western Front.

Sales of white poppies have soared this year, despite the trend being described by some as "disingenuous". @ianpaynesport asks: why would you wear one? pic.twitter.com/KRc7CMr0Px

"There are lots and lots of people who are extremely unhappy with the way that the orthodox remembrance ceremonies are operated," Albert Beale, chairman of the Peace Pledge Union, told LBC radio on Sunday, November 4.

"Red poppies are designed by the British Legion to remember the British military dead. The majority of people who get killed in wars are not the military, they're civilians," added Mr. Beale, who insisted his organization did not mean to disrespect anybody.

Wearing of the red poppy is mandatory for TV presenter on the BBC in the run up to Remembrance Sunday and the poppies have also been sewn into the shirts of English Premier League and lower division teams.

On Saturday, November 3, Stoke City's Irish midfielder James McClean was booed by his team's own fans throughout the goalless draw with Middlesbrough because he publicly refused to wear the poppy on his shirt.

"They have nothing in their whole imperial arsenal that can break the spirit of one Irishman who doesn't want to be broken….Your abuse, your throwing things, your booing, do your worst," said McClean on Instagram after the match, and he also referred to some Stoke fans as "uneducated cavemen".

“They have nothing in their whole imperial arsenal that can break the spirit of one Irishman who doesn’t want to be broken.” Your abuse, your throwing things, your booing, do your worst.. to the home fans that are actually educated and support me, thank yous.. to the section of uneducated cavemen in left hand corner of the boothen end stand that want to song their anti irish song each game and call me a fenian this and that.. i am a PROUD FENIAN no c@#t will ever change that, so sing away 👌🏻🇮🇪

McClean was born into an Irish republican family in Londonderry, where in 1972 British soldiers shot dead 13 civilian protesters on Bloody Sunday. He refuses to wear the poppy for political reasons.

The row over whether to wear red, white or no poppies at all has become an emotive subject this year as Britain, France, Australia and several other countries commemorate the end of the First World War.

Ironically if you think James McClean should be forced to wear a poppy, you'd probably have been on the other side in WWII.

"Remembrance is neutral on both the causes and consequences of individual conflicts and is above partisan and political interpretation," a Royal British Legion spokesperson told Sputnik.

"The Legion defends the right to wear different poppies. However, the Legion's red poppy is a symbol of peace inclusive of all regardless of race, belief, origin, or sexual/gender identity. Importantly, the red poppy raises funds to support our armed forces, veterans and their families in their time of need," said the spokesperson.

Just look at the intolerance and hatred on display all because James McClean refuses to wear a poppy. pic.twitter.com/SP8THxKWh8

"We see no contradiction in wearing other emblems alongside the red poppy, and recognize the right of any group or individual to express their view within the law. The Legion will take every step to defend the poppy from misappropriation by political, partisan, extremist or commercial interest," she added.

White poppies were first worn in 1933 — during the era of appeasement to Hitler and the Nazis — and the Peace Pledge Union was founded in 1934 as a pacifist organization dedicated to a "warless world".

"Nearly 100 years after the end of the ‘war to end all wars' we still have a long way to go to put an end to a social institution that even in the last decade has contributed to the killing of millions," they say on their website.