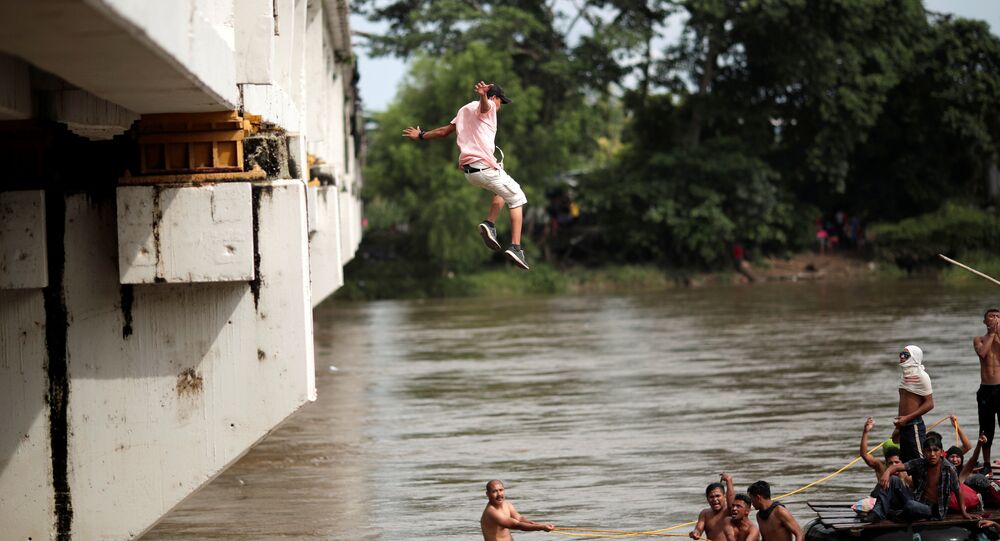 Republican President Donald Trump is raising the alarm Central American migrants who seek a better life in the US to advance his agenda of building a wall on the US-Mexico border, according to the caravan's organizer.

Jackie McVicar, a member of the Atlantic Region Solidarity Network, joined Radio Sputnik's Loud & Clear on Friday to discuss the deportation of Bartolo Fuentes to Honduras after he was detained in Guatemala.

Fuentes, who is a journalist and an organizer of the mostly Honduran migrant caravan making its way through Central America toward Mexico and the US, was detained on Tuesday for failing to comply with Guatemala's immigration rules, the Honduran Security Ministry announced earlier this week.

The announcement was made after US President Donald Trump tweeted that he would be cutting off economic aid to several Central American countries should the caravan not be stopped.

​McVicar told hosts Brian Becker and Walter Smolarek that Guatemalan immigration officials purposely zeroed in on Bartolos when he arrived, pulling him into their custody before shipping him back to Honduras.

"He was arbitrarily detained at the Guatemala-Honduras border three days ago," McVicar said, adding that Guatemalan police, in addition to two vehicles from the US embassy, trailed him everywhere before he made it back to Honduras.

"[Fuentes has] been a very strong voice, reporting the voices of the people on the ground. He's seen people die along the way, seen children die in their mothers' arms, and it should be shameful what [Honduran President] Juan Orlando [Hernández] has done and the true lack of solidarity, not only by the government, but the political persecution against those reporting on the issue."

Moments after Fuentes arrived at the Toncontín International Airport in Tegucigalpa, Honduras, on Friday, he spoke to a group of reporters. McVicar was one of many in attendance.

"He said that the people that are really benefiting out of this is Donald Trump, because it's feeding into his discourse and giving him more ammunition to build the wall, to criminalize, to defame, to stigmatize Central Americans who are just trying to look for a better life," McVicar recalled Fuentes saying.

Fuentes also took the time to tell his fellow journalists that he would be pressing charges against Honduran media outlets and the Juan Orlando Hernández administration of over their efforts to try and defame his character.

"They're trying to criminalize me; many have dared to say that we were charging $1,500… that they will have to prove," Honduran outlet La Prensa reported Fuentes saying.

McVicar noted that the violence and poverty Hondurans are attempting to flee from have worsened ever since the US-supported 2009 Honduran coup, in which Honduran President Manuel Zelaya was deposed.

"People have nowhere to go, no future," McVicar said. "People are dying of hunger because there's no work, and the Honduran government is doing nothing about that."

Friday also saw a chaotic scene unfold as migrants reached the Guatemala-Mexico border, with some being allowed to pass through to apply for refugee status in Mexico. Others, fed up with waiting, went as far as trying to swim into Mexico via the Suchiate River.

​With Mexican authorities having been able to hold back the majority of the 3,000-plus travelers, Trump took the opportunity to offer his thanks for their efforts. "As of this moment, I thank Mexico. I hope they continue," he said, stressing that the migrant caravan wouldn't be entering the US "on [his] watch."

US Migrant Crisis: Will the Caravan Derail the DACA Deal?