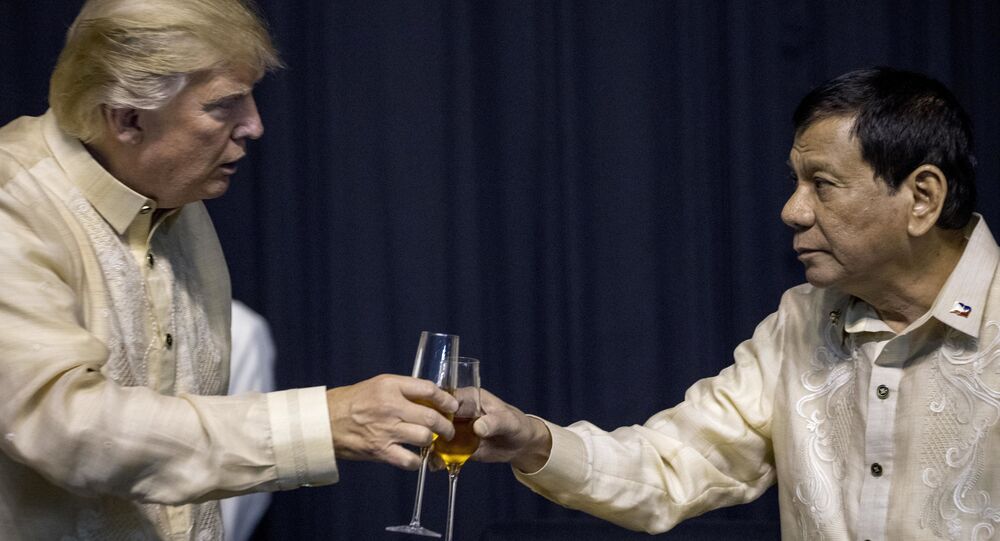 The US Secret Service is reported to have foiled an assassination attempt on President Donald Trump during his 2017 visit to the Philippines. Whether the threat to Trump's life was serious or not, he isn’t the only US President to evade an assassin’s putative bullet - some have come far closer to death than he, in much less publicized cases.

Days before the conference, Manila raised its national terror threat level to "critical" due to the circulation of Daesh* videos which urged "lone wolf" attackers to "ambush" the US leader during his visit. One social media user seemed to take up the challenge, tweeting that they were "gonna be in Manila the same time as Trump," and pledging to "take one for the team", along with a photo of Lee Harvey Oswald, the alleged assassin of US President John F. Kennedy.

The Secret Service traced the owner's computer to a location mere kilometers away from the hotel where the President was due to stay. With the assistance of the Manila police, the Service swept the area and apprehended the suspect.

Would-be Presidential assassins are almost exclusively male — but two women separately attempted to assassinate Gerald Ford within weeks of each other in 1975.

Lynette Fromme was an adherent of Charles Manson and a member of his 'Family'. When Manson and some of his followers were arrested for the notorious Sharon Tate and Leno and Rosemary LaBianca murders in 1969, she and the remaining Family camped outside the trial, carving Xs into their heads just as Manson and his fellow defendants did, proclaiming their leader's innocence to the media and preaching his apocalyptic philosophy outside court to anyone who would listen. Fromme was subsequently convicted of attempting to prevent Manson's imprisoned followers from testifying, as well as contempt of court when she refused to testify, receiving short jail sentences for both offenses.

© AP Photo / File
In this 1969 file photo, Charles Manson is escorted to his arraignment on conspiracy-murder charges in connection with the Sharon Tate murder case

When released, she was involved in a number of criminal enterprises with other Family members, although despite being repeatedly arrested and remanded in custody for extended periods, she managed to evade conviction and imprisonment.

On the morning of September 5 1975, Fromme went to Sacramento's Capitol Park, where President Ford was giving a public speech. Dressed in a red robe and armed with a Colt M1911.45-caliber semiautomatic pistol loaded with four rounds, she pointed the gun at Ford, but was immediately restrained by Secret Service agent Larry Buendorf. While being handcuffed, she managed to say a few sentences to attendant newscrews, repeatedly stressing the gun "didn't go off".

In the resultant trial, Fromme refused to cooperate with her defense, and threw an apple at prosecutor Dwayne Keyes after he recommended she be severely punished, hitting him in the face and knocking off his glasses — she was eventually jailed for life. She became eligible for parole in 1985, but was only released August 2009.

Sara Jane Moore, a left-wing political activist, would attempt to strike Ford in San Francisco on September 22, a day after she'd been picked up by police on an illegal handgun charge. When Ford emerged from the St. Francis Hotel to greet crowds, Moore — who was about 12 meters away from the President — fired a single shot with a.38 caliber revolver, bought in haste earlier that morning. She narrowly missed, and while trying to fire again, former marine Oliver Sipple dived towards her and grabbed her arm, almost certainly saving Ford's life. In 2010, prosecuting judge Samuel Conti said she would've killed Ford had she had her own gun, and it was only because the firearm "was faulty" the President's life was spared.

Moore pleaded guilty to attempted assassination and was sentenced to life in prison. During the trial, she repeatedly expressed disappointment she wasn't successful in the attempt, stating "I do regret I didn't succeed, and allow the winds of change to start. I wish I had killed him. I did it to create chaos."

She was paroled December 31 2007 after serving 32 years. Upon release she renounced her previous regret over her failure to kill Ford, stating she was "very glad" she didn't succeed, and had been "blinded" by her "radical political views".

Ford's successor Jimmy Carter almost fell victim to a bizarre and little-known assassination conspiracy May 5 1979, when he was scheduled to make a speech at the Los Angeles Civic Center Mall.

Ohio-born drifter Raymond Lee Harvey, who had a history of mental illness, was arrested by the Secret Service after being found carrying a starter pistol with blank rounds, ten minutes before Carter's speech.

Under questioning, he claimed to be part of a four-man operation, having gone to the roof of a hotel with one member of the gang the night prior to practice shooting blank rounds from the starter pistol and test how much noise it would make.

The individual, who he named 'Julio', was later arrested — he gave the name Oswaldo Espinoza Ortiz.

Harvey was jailed on a US$50,000 bond, given his transient status, and Ortiz was held on a US$100,000 bond as a material witness. The pair claimed under interrogation Harvey was meant to create a distraction while two other accomplices shot Carter. With no clues as to the identities of the alleged assassins — or indeed if they even existed — the two were eventually released without charge.

© AP Photo
In this Nov. 23, 1963 file photo, Lee Harvey Oswald is led down a corridor of the Dallas police station for another round of questioning in connection with the assassination of US, President John F. Kennedy. Oswald, who denied any involvement in the shooting, was formally charged with murder.

The names of the pair give the story a curious character — after all, a portmanteau of their given monikers evokes Lee Harvey Oswald. This may merely be a strange coincidence, but some have suggested it was an attempt to send an unsubtle message to Carter, who'd trodden a somewhat different path to his post-war predecessors in respect of foreign policy. His successor, Ronald Reagan, would decisively and immediately reverse the non-interventionist path he'd trodden during his four years in office.

Powerful Enemy May Be Behind Assassination Attempt on Maduro - Journo

Erdogan on Assassination Attempt Plot: 'These Threats Won't Deter Us'

Robert Kennedy’s Assassination and How It Changed Politics in America