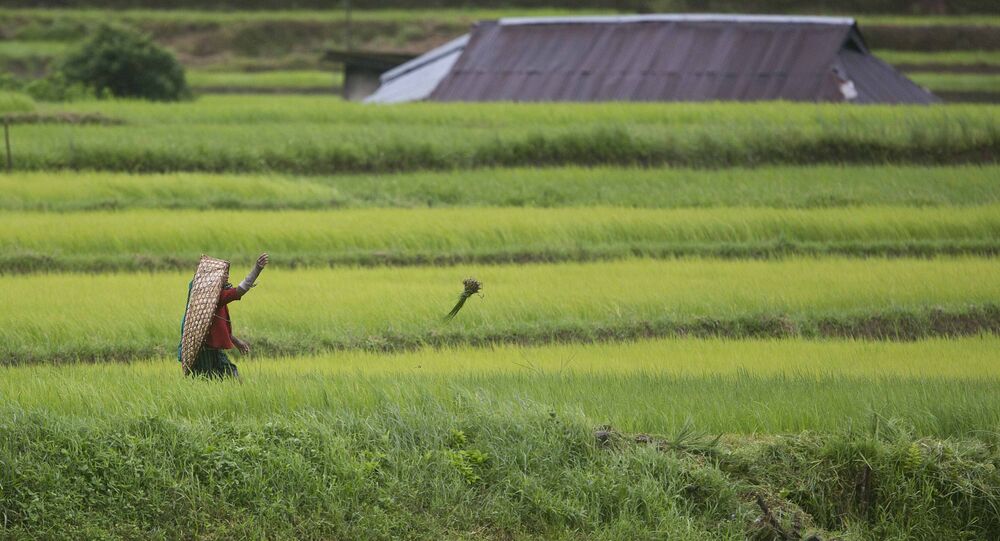 India has the highest number of organic producers in the world. The policymakers in the country have repeatedly expressed commitment to sustainable agriculture and the government has established various schemes. Despite all this, organic farming in India is not yet a successful endeavor.

New Delhi (Sputnik) — More than 30 percent of the organic producers in the world are from India, according to the latest edition of the World of Organic Agriculture report published by the reputed international organizations FiBL and IFOAM. The country has registered a significant increase in organic agricultural land and has reached among the top 10 countries with the largest areas of organic land.

© CC BY 2.0 / Bo Nielsen
US Supports Farmers by Launching Trade Mitigation Package Amid Tarrifs
Despite the promising statistics, most organic farmers are struggling to reap the benefits of sustainable agriculture. Small and medium farms are not sufficiently enabled with training and resources in order to achieve profits. They are finding it difficult to cope with the higher input costs and limited market for organic products when compared to chemical-intensive farming. These factors discourage conventional farmers to switch to organic practices, even though they are aware of the environmental hazards of chemical fertilizers and pesticides.

Sputnik spoke to Anupam Deb, director of Sudharma Krishi Consultants, a company that provides solutions in the agribusiness sector. Deb explains why most farmers don't find the organic route to be a financially viable option.

"When you want to start an organic farming project you'll have to wait at least three years to get certified. During this time period, you cannot sell your produce as organic. But you've to practice the protocol of organic farming. In most cases, the cost of organic farming is higher than traditional farming. This becomes a challenge because even though you are spending more you can't claim the premium that is associated with organic produce," Anupam Deb said.

© AP Photo / Schalk van Zuydam
Hundreds Protest South Africa Land Seizure From 'Minority' White Farmers in New Zealand (PHOTOS)
A large-scale shift to organic can only be achieved through government support, as in the case of the northeastern state of Sikkim in India, which was declared a 100 percent organic state in 2016. Over a span of 12 years, all the agricultural land in the state was gradually converted to organic land. The Sikkim state government was in a position to take this resolution because the per hectare fertilizer consumption in the state was already quite limited.

Several other states in India have instituted organic farming policies. Kerala has already announced its intention to become a 100 percent organic state. In 2015, the Indian government launched the Paramparagat Krishi Vikas Yojana (PKVY) to promote organic farming, but most states have failed to utilize even 50 percent of the fund allocated to them under this scheme.

Agriculture experts reason that all the states of India have their own unique set of challenges due to differences in their agro-ecological zones. "Agriculture policy is a prerogative of state governments due to the versatility of geography and climate in India," Deb explains.

Even in Sikkim, several farmers have to struggle due to decreased output and insufficient know-how for dealing with pest attacks. Sputnik spoke to Udayan Arya, founder and director of Smur Agro Ventures, a company that produces organic farming inputs.

"We need a scientific approach to organically enhanced output. In order to compete with chemical-intensive commercial ventures, we need organic inputs that can give more output than chemical products. We've developed a process of intermittent nutrient supply to plants where high absorbent nutrients are sprayed according to their own crop-cycle. Even fungicides and pesticides are nutrient based. The cost factor is also important, some of our products are drastically cheaper than the chemical option. In India, the high cost of chemical inputs have forced farmers under huge debt," Udayan Arya said.

© REUTERS / Jim Young
‘Government Needs to Do Its Job’: Farm Workers’ Union Sues US Labor Dept Over Poor Conditions for Foreign Workers
An important incentive for farmers to invest in organic farming is the hope to procure a premium for their produce. India's Agriculture Ministry is contemplating to offer a 20% higher minimum sales price for organic products than products of chemical farming. But, the majority of consumers are discouraged by the additional monthly expenditure required to switch to organic food. There is a general notion that the "organic" tag is merely marketing hype.

"Most people are unaware of the differences between organic and inorganic farming. Even a lot of educated people don't know how to identify if a product is legally organic. Besides those who are aware of the health benefits and want to purchase organic food regularly are not residing in a concentrated area. This is a constraint in viable supply-chain management," Deb explains.

The international organic market has increased to 90 billion USD. Although the demand for organic food is concentrated in the US and Europe, this positive trend is bound to continue. The Indian domestic market is also growing slowly but steadily. The stakeholders in the country have expressed that organic is the way forward to protect the environment, sustain soil health and fertility, and achieve nutritional security.