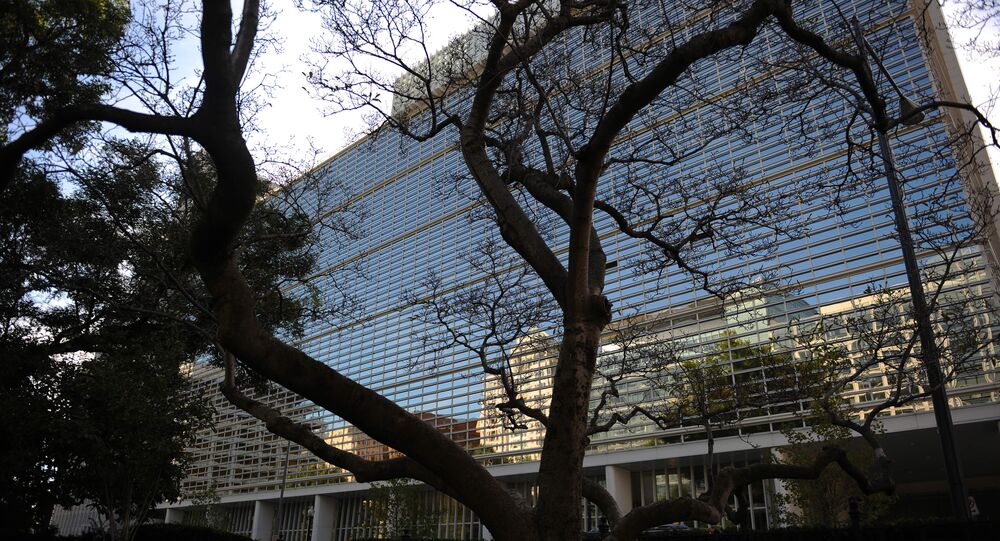 The International Monetary Fund has warned that US President Donald Trump’s trade war with China and Europe will hit global growth this year and next. According to the IMF, even without a further deterioration in US-China relations, the global economy will grow 3.7% this year and next. That's less than the 3.9% prediction issued in April.

Sputnik has talked about the IMF's warning with Carl Fey, a professor of international trade with the School of Business at Aalto University.

Sputnik: What do you make of this new report by the IMF? How bad is the situation really they've said that it's going to be 0.2% less growth for the global economy, is that really something frightening?

© REUTERS / Kim Kyung-Hoon
Citing Tariff Battle, IMF Predicts Slower Growth in US, China
Carl Fey: Well, of course this is really unfortunate and bad if this will happen but, in fact, my concern is that it could even be worse than that if things continue as they are. I think at the moment one of the key issues is that many people believe, and I think no one really knows for sure, that Trump's attempt with these tariffs is a negotiating tactic; a hope that China and the US can come to some sort of agreement and back down and come to something closer to the way it was before but with a better deal for the US.

If this happens it will not be such a big problem for the global economy, but if it becomes that this is actually a new policy of the US to try to have such significant tariffs rather than a short-term negotiating tactic, then I think we're in for some real problems.

Sputnik: How bad would that be from your point of view?

Carl Fey: Well, that would be obviously quite substantial. I think many people have focused on the impact to the US economy and the impact to the Chinese economy of this conflict. And I think the important thing to understand today is that the economies of the world are incredibly interlinked. There are global supply chains that feature in most industries.

So when you have one particular business or one particular industry affected in one country that company is very often selling its produce or products to other companies in other countries and so it really affects the entire world quite substantially. So there's a real risk I think that we'll see the effects of this greater than the 0.2% that is currently suggested even though that is, of course, quiet substantive just in itself.

Sputnik: And that was the first downgrade since the summer of 2016, so I guess it's supposed to be quite significant that it's been that long before we've seen a downgrade, but it's very interesting to note that one of the countries that is going to be most affected is the United States and going into the US midterms which are so important for Donald Trump like no other president before because it's not just a matter of keeping your policies above water and being able to pass your bills, this is a matter of maybe whether or not Trump will stay in office because of the way his presidency has developed, do you really think that this is a new policy of his to have these higher tariffs?

© Sputnik / Anton Denisov
IMF Raises Russia's 2019 GDP Growth Projections to 1.8% - Report
Carl Fey: I think it probably is a bargaining tool but the question is what happens if he can't get the agreement that he wants. It's difficult for him to back down, it's difficult for China to back down and then it might become a sort of a new policy. So I think that's the real risk that we see.

Carl Fey: Surely, I'm sure that the desired outcome for Trump would be that he is able to come to some sort of agreement before the midterm elections, given where we stand at the moment I think it's unlikely there is an agreement that quickly. I think it's going to take more time than that.

Sputnik: If that doesn't happen what do you think is going to happen if the Democrats see a significant win in the midterms?

© AP Photo / Kirsty Wigglesworth, pool
UK Gets Warm Welcome in Asia After Facing Cold Shoulder in Brexit Talks With EU - Analysts
Carl Fey: There are a couple of things here worth remembering. One, is that it's a lot easier to lead a country or to lead a company when things are going well because of conditions of the previous leaders of the country or the company that they have made or just the global economy in general.

And so Trump is benefiting right now that fortunately things are going pretty well in the US and it's also important to remember that while indeed this is hurting the US economy, the tariffs that he has imposed, at the same time a lot of his base, the people that might vote for him, are people who really like to see the US standing strong to other countries on trade issues which it has not done for a long time.

© AP Photo
Italy is Definitely a Major Threat to Stability of Eurozone and Europe - Prof
And as a result, Trump also gets a boost by doing these things because this is exactly what the people who voted for him actually wanted to have happen in many cases; and things have not been as bad as many people predicted. It surely has taken a longer time to see a significant negative affect on the US economy.

Now what will happen at the midterm elections, I think it's a little bit hard to say. It looks like most people are saying that the Democrats are likely to make some gains and the question is just how many gains will we see. And, obviously, this will have an impact on things, of course. It's not Trump being re-elected but whether he has a majority to deal with in the Senate makes a big difference for how he can progress his policies and thus how he will be evaluated for his first four years in office. So this is really a critical election for the US and for the world, which is why I think we're seeing so much attention and so much money being spent on it in the US.

The views expressed in this article are solely those of Carl Fey and do not necessarily reflect the official position of Sputnik.