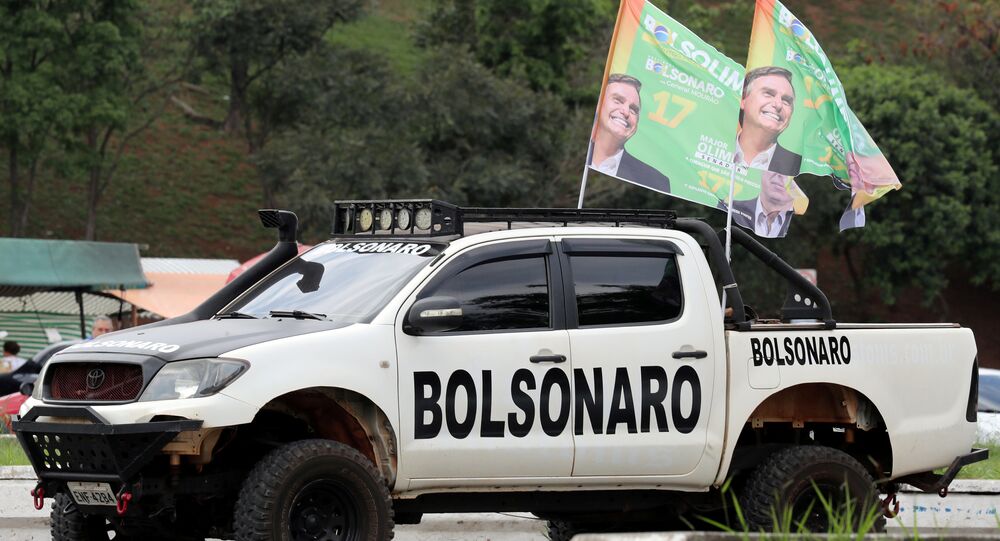 According to the latest poll by Ibope, Brazilian right-wing presidential candidate Jair Bolsonaro would tie Fernando Haddad, the left-wing candidate from Brazil's Workers Party, in a likely second-round runoff. Sputnik has discussed the prospects of the vote with Marlos Ápyus, a journalist and editor of Antagonista and Implicante.

Sputnik: Is it possible to draw parallels between Bolsonaro’s election campaign and anti-establishment campaigns around the world?

Marlos Ápyus:  Yes, it is. Although he had worked for 28 years as a federal congressman, he claims to voters he is an anti-establishment candidate. And the voters believe in him, much because hasn’t been involved in recent corruption scandals. Another reason to believe in this position is the fact that he has always opposed not only to the Federal Government, but also the establishment as a whole.

Sputnik: What kind of foreign policy strategy can we expect from Bolsonaro if he becomes the 38th president of Brazil?

Marlos Ápyus: Bolsonaro is an extreme right nationalist and militarist politician, what creates a deep sympathy between him and the groups who oppose socialist and social-democratic countries or governments. His political group does not hide the admiration for Donald Trump and the State of Israel. And Bolsonaro already made it clear that he admired Augusto Pinochet, Chilean leader who served as a counterpoint to Fidel Castro in Latin America.

Shortly before the official start of the campaign, Jair Bolsonaro traveled to Asia to learn more about the work of the South Korean government. So, I imagine that an eventual Bolsonaro’s government would seek dialogue with the most capitalist nations in the world.

© REUTERS / Ueslei Marcelino
Brazil's Temer Says Not Afraid of Arrest Over Corruption Charges
Sputnik: Can we expect a new alliance between the US and Brazil? Could Brazil under a new president play a more active role in the humanitarian crisis in Venezuela?


Marlos Ápyus: Yes. The corruption of Lula and Dilma Rousseff’s governments helped transform Venezuela into a Bolivarian dictatorship. Jair Bolsonaro made votes criticizing this tragedy. A Bolsonaro’s victory would surely be terrible for Nicolas Maduro. Brazil has no recent history of military interference in other nations. But, certainly, a Bolsonaro’s government would make firmer opposition to Venezuela.

Sputnik: Which campaign promises are the most popular among Bolsonaro’s voter base?

Marlos Ápyus: The fight against crime and violence are gaining more and more engagement. More than 60 thousand Brazilians are killed every year, it is a world record. The last governments were quite benevolent in the fight against violence. Bolsonaro believes that violence could be more efficiently fought with even more violence. He assumes that he draws inspiration from Rodrigo Duterte. His plan, however, is unclear. We only know that he wants to ease gun control and give more freedom for police forces to fight drug traffickers without so many obstacles in court.

Sputnik: Broadly speaking, do you think that the assassination attempt on Bolsonaro last month made him more popular among the electorate and raised his media profile?

Marlos Ápyus: Yes. Bolsonaro grows whenever the system fails. And the polls showed that. After the assassination attempt, the candidate had grown between 7 and 10 million votes. The author of the attack had a history with the Brazilian extreme left, and this fact caused a large part of the undecided voter to migrate to the extreme right.

Sputnik: How would you describe Bolsonaro’s relations with the Brazilian armed forces, especially after he chose a retired general as his running mate?

Marlos Ápyus: The Brazilian Armed Forces has been keeping a friendly relationship with power for some decades. Bolsonaro appeared on the news in the 1980s under the suspicion of preparing terrorist attacks inside the army (it was a common practice of the extreme right at the beginning and end of the military dictatorship). Years later, he was acquitted. But fame made him abandon his army and enter politics. His revolutionary stance is a minority within the Armed Forces. But he still insists that Brazil was a democracy when the country was led by military dictators. Once in the Presidency, he will have the strength to form a majority there.

Marlos Ápyus: This polarization already exists and is very clear in the first round. So much that there is a risk of not having a second shift. One side grows in fear of the other. In practice, there is no vote in favor of Bolsonaro or vote in favor of Haddad. Voters are voting in Haddad against Bolsonaro, and voting in Bolsonaro against Haddad. It is a duel of rejections. In the end, it will win the second biggest nightmare of the Brazilian people.