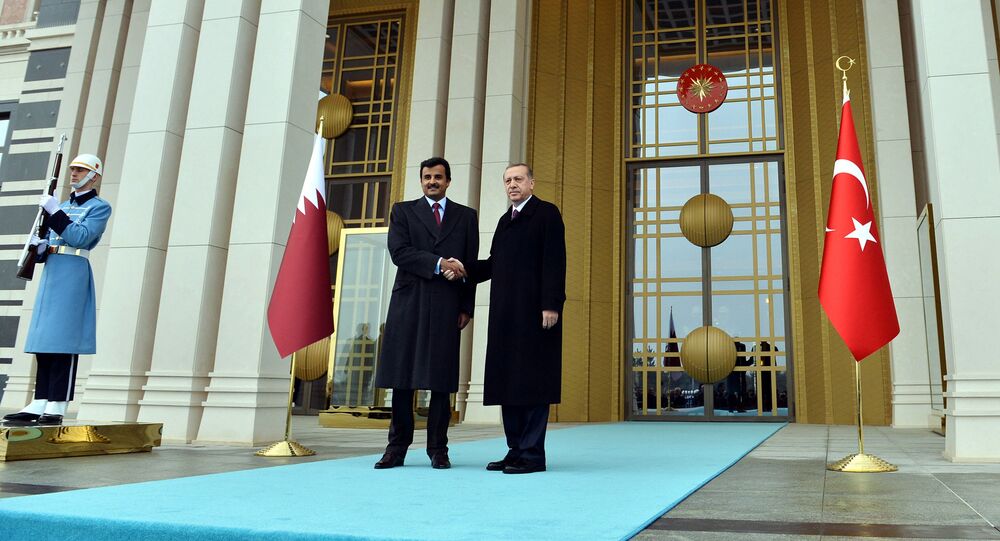 Amid a serious rise in tensions between the US and Turkey a number of Turkish media outlets said that Ankara had failed to receive Qatar’s support in the face of sanctions imposed on Turkey by the United States.

Earlier, in a telephone linkup with the Emir of Qatar, Sheikh Tamim bin Hamad Al Thani, Turkish President Recep Tayyip Erdogan discussed a range of bilateral and regional issues. The two leaders reportedly “demonstrated a strong desire for strengthening across-the-board cooperation between Turkey and Qatar.”
In an interview with Sputnik, Yasin Aktay, an advisor to the chaiman of Turkey’s governing Justice and Development Party (AKP), described Qatar’s reported silence about Washington’s sanctions against Ankara, as “exaggerated.”

“Qatar who has been under sanctions from four countries for more an a year now, is primarily trying to handle its own problems. And here it can rely on Turkey’s wholehearted support. However, under the circumstances, Qatar has to pursue a balanced policy and try to win the US over to its side,” Aktay said.

He added that this doesn’t mean that Qatar supports Washington's measures vis-a-vis Turkey.

© AP Photo / Yasin Bulbul, Presidential Press Service
Turkey-Qatar Defense Cooperation Stepped Up As Regional Crisis Drags On
“During the telephone exchange, the Emir of Qatar made it perfectly clear that his country is on our side. Moreover, the people of Qatar are foursquare behind Turkey, which also reflects their leaders’ position on the issue,” he noted.

Pointing to the clear pro-Turkish tonality of the Qatari media, above all al-Jazeera, he mentioned the ongoing campaign in Qatar in support of Turkey’s tour industry.

“Thanks to this campaign we have been seen an unprecedented rise in the number of tourists coming to Turkey from Qatar, Kuwait and even the United Arab Emirates which speaks volumes about these countries’ support for and solidarity with Turkey,” Yasin Aktay emphasized.

The tensions in US-Turkish relations escalated after President Trump said that the United States would increase import tariffs on Turkish steel and aluminum to 50 and 20 percent respectively. Following Trump's decision, the Turkish lira fell to an all-time low against the US dollar on Sunday.

Relations between the two countries soured in 2016 after US pastor Andrew Brunson was arrested in Turkey for allegedly being a member of the movement founded by Islamic cleric Fethullah Gulen, who Ankara accused of trying to overthrow the government in 2016 and listed as a terrorist organization.