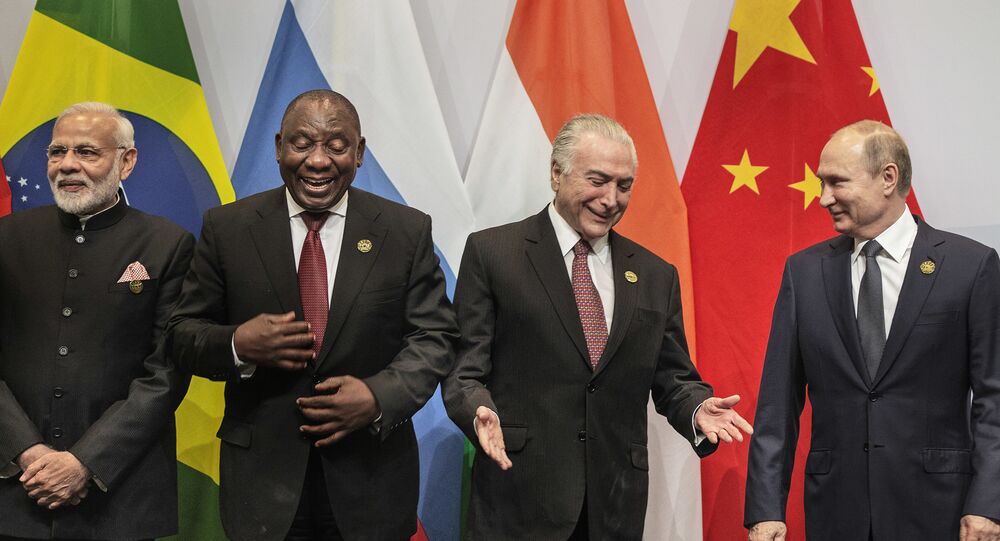 BRICS: 'Declaration Shows That Global Trade Must Be Strengthened' – Professor

The BRICS nations have signed a joint declaration underlining the importance of an open world economy. The declaration states that all countries benefit from globalization. Radio Sputnik discussed the declaration with Srikanth Kondapalli, a professor in Chinese studies at Jawaharlal Nehru University in New Delhi, India.

Sputnik: How important is the declaration signed by the BRICS nations against the background of tensions that have emerged due to US tariff policies?

Srikanth Kondapalli: I think this has been one of the major achievements of the BRICS declaration in Johannesburg. Number one, in terms of raising some of the global security issues, like the Palestinian issue, the issue of nuclear Iran, then there is also Syria, Afghanistan and a host of other security issues.

There was also concern related to keeping the world free from barriers to trade and in terms of strengthening the World Trade Organization’s dispute resolution mechanism. Most importantly, I think this declaration also has a forward-looking attitude toward inclusive development and shared prosperity and the fourth industrial revolution, that is, artificial intelligence, new energy vehicles, automation, space technologies, and so on and so forth.

© Sputnik / Aleksey Nikolskyi
'Something Green': The Mystery of the Putin-Xi Dinner at BRICS Summit (PHOTO)
I think this is a very forward-looking declaration, which is important for all these five countries but also for the G7 countries, the developing countries.

Sputnik: You have mentioned a whole host of global challenges there. Now Xi Jinping said that there could be no winner in a global trade war. To what extent could any potential trade confrontation undermine the global economic stability and growth now within the world? What is your take on that?

Srikanth Kondapalli: Indeed, I think there’s been a global trade decline over the last few years due to the intensification of the global financial crisis since 2007. Global trade has been hovering around 1 to 2 percent increase, which is in historical terms a negative growth rate, number one.

Number two, because of the recent tariff increases by both the US and other countries, there has been a concern on the sentiment, which is also reflected in the joint statement in Johannesburg, that the global sentiment for global trade needs to be strengthened; so to that extent I think the intensification of any trade war between major trading countries would have a cascading effect on exports and imports, which would have a broad impact on not only global trade but also on investment profiles.

As the IMF chief recently mentioned, there has been over $12 trillion of prospective investments … yet there is no actual investment in many of the countries. So while you have investments, at the same time, there are no conducive environments for such investments. So number one – trade, number two – in terms of investments this has been a very bleak situation, which the BRICS countries want to avoid, as well as create conditions for growth for everyone.

Sputnik: To what degree does the US unilateralism give boost to the BRICS cooperation; whenever there is a challenge or a difficult situation regarding anything in life, but in this specific situation, trade, that gives an opportunity to other countries – so what boost could this give to BRICS cooperation do you think?

© AFP 2020 / GULSHAN KHAN
'By Helping Each Other BRICS Nations Could Diversify Their Economies' – Prof.
Srikanth Kondapalli: Well I think the idea of multipolarity to counter unipolarity came from former Russian Premiere Primakov who came to New Delhi in 1996 and proposed multipolarity. Since then we have experimented with Russia, China and India – trilateral – and now the BRICS countries in the last 10 summit meetings have been emphasizing how to oppose unipolarity, and they have raised several security issues; for example on Syria, the formula which used to be applied to Afghanistan, that is, “Afghan owned, Afghan led,” has now been termed for the “Syrian led, Syrian owned” dispute resolution. So to that extent I think there has been concern expressed against unilateralism.

We have seen this in Iraq, in Afghanistan and in other places. So the BRICS countries have been interesting on following the United Nations charter, which is reflected again in the Johannesburg declaration.

Number two – it is also reflected in the issues that have been raised by these five countries, for example, on the IMF restructuring and reform, the United Nations Security Council reform and reorganization – they have recreated their old position, Russia and China have recreated their old position, Brazil, India and South Africa have tried to have a bigger role in the international system.

This is nothing new because similar statements were made during the Yekaterinburg meeting in 2009. So we could probably see some power momentum in the future on that issue of trading multipolarity.

There is also mention of counterterrorism, also ICTs – information and communication technologies – which should not be [associated] with terrorist groups, so there has been some concern. Also the opposing unipolarity is reflected in not militarizing the outer space; so there are various versions of multipolarity reflected in regional security issues on Iran, Palestine, and Syria.

Secondly, it is reflected in economic issues like the reorganization and reform of the international monetary fund in terms of the voting rights in the bank process and thirdly in terms of outer space non-weaponization.

The views and opinions expressed by Srikanth Kondapalli are those of the speaker and do not necessarily reflect those of Sputnik.

'By Helping Each Other BRICS Nations Could Diversify Their Economies' – Prof.