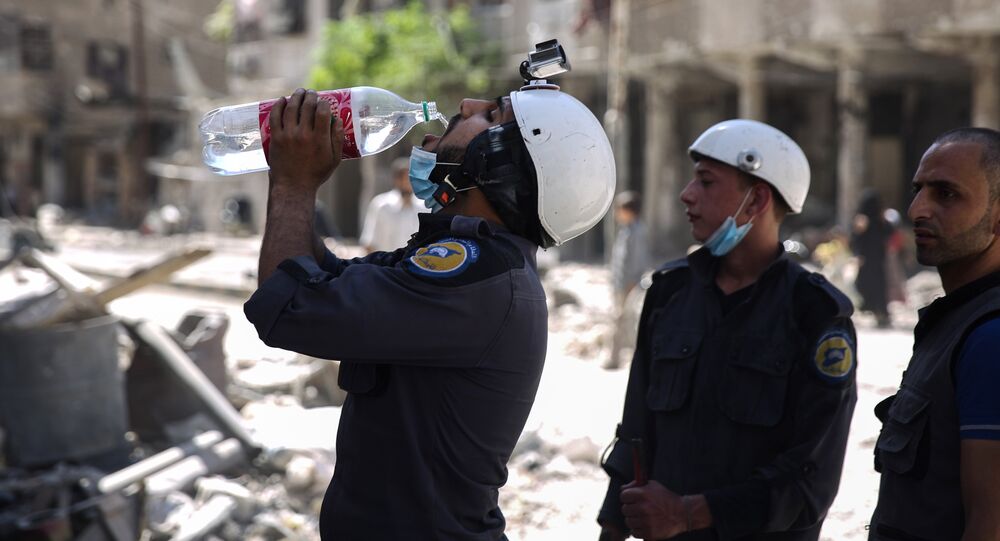 The White Helmets NGO, also known as the Syrian Civil Defense, has declared the rescue of civilians in war zones as its fundamental goal. However, the non-governmental organization has been repeatedly accused of having links to jihadists, as well as disseminating Western-sponsored propaganda.

Commenting on the evacuation of about 800 White Helmets members from Syria to Jordan in an interview with Sputnik, Gian Micalessin, a columnist of the Italian newspaper Il Giornale, slammed Germany and Britain's readiness to resettle these activists.

"London and Berlin refuse to receive migrants rescued by their ships within the framework of the Sophia mission. They want the refugees to stay in Italy in line with a deal signed by Rome on the admission of all the illegal migrants fleeing from the Libyan coast. As compensation, Britain and Germany do not object to receiving the White Helmets, friends of terrorists who fled the Syrian provinces. It could have been seen as a paradox or even fake news, but this is a reality," Micalessin underscored.

He predicted that in a few weeks, the 800 White Helmets members would leave Jordan for Canada, as well as Germany and the UK, "the two EU countries that have already survived the terrorist attacks."

Micalessin described London and Berlin's plans as "spit in the face of both Italy and a huge number of those Europeans who have fallen victim to terrorist attacks."

"The 800 White Helmets members, who with the help of Western media and Hollywood films turned into heroic volunteers helping Syrian rebels, are little more than mercenaries supporting the Islamist militants," he pointed out, also labeling the White Helmets as "in fact one of the elements of the terror campaign organized by al-Nusra Front* and other jihadist organizations."

Micalessin accused the White Helmets of disseminating jihadist propaganda and videos that "prompted the West to believe that the Syrian government was involved in a series of alleged chemical weapons attacks" that have never been confirmed.

"That's why the White Helmets will be received as heroes in Germany and Britain, the two European countries which have already suffered from terrorists, but which have always said 'no' to Italy's requests to accept migrants rescued at sea. The suicidal stupidity of Europe has already surpassed the worst fantasies," he concluded.

On Monday, the Russian Foreign Ministry said that during the Syrian conflict, members of the White Helmets non-governmental organization had been involved in "the most odious provocations" and that their evacuation from Syria had "revealed their true nature and exposed their hypocrisy to the whole world."

The ministry recalled that the White Helmets "were preparing blatant fakes, which were then used as a pretext for making accusations against the Syrian authorities."

The Syrian Foreign Ministry has, in turn, condemned the evacuation of the White Helmets' personnel as a "criminal operation" conducted by Israel, whereas Washington has welcomed the transfer of the NGO's members, calling them ‎"brave volunteers, who have saved thousands of lives."

© AP Photo / Syrian Civil Defense White Helmets
Syria Accuses US, UK, France of Backing Terror Through Support for White Helmets
In a separate development, media outlets reported that Germany and the UK were willing to offer asylum to some of the White Helmets members who had been evacuated from Syria. The two countries' authorities have declined to confirm the information.

The developments came shortly after the Israeli Foreign Ministry announced that the country's authorities had evacuated about 800 White Helmets members along with their families from Syria to a "neighboring country" at the request of Canada, European countries and the United States.According to local media, about 800 White Helmets members have been transported through Israel to Jordan.

The views and opinions expressed by Gian Micalessin are those of the journalist and do not necessarily reflect those of Sputnik.