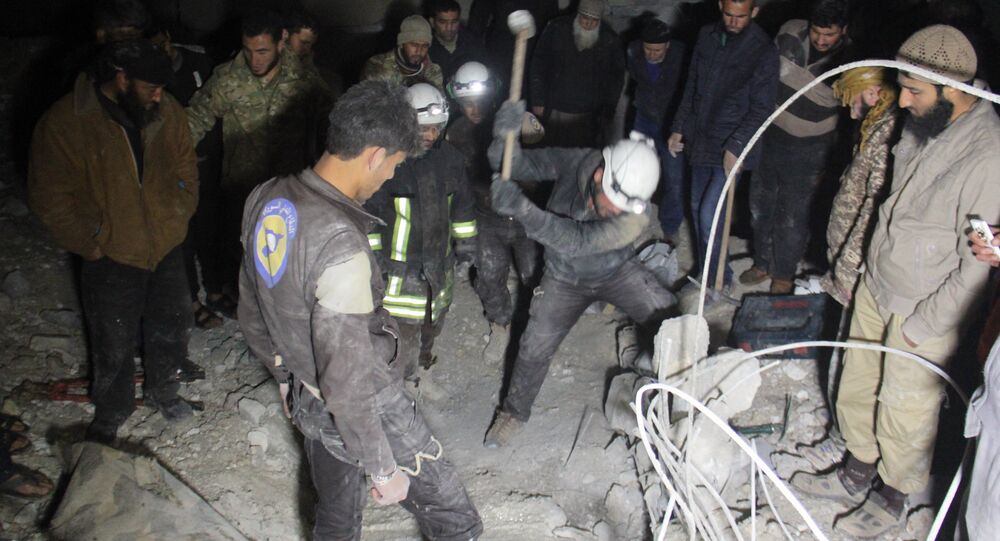 The White Helmets, also called the Syria Civil Defense, are a network of first responders, who “rescue” wounded in the aftermath of airstrikes, shelling, or blasts in rebel-held territory across Syria.

The United Nations has played no role in the evacuation of more than 420 White Helmet activists from Syria, official spokesman for the organization's general secretary, Stefane Dujarrik, told reporters on Monday.

"We have nothing to do with this process of moving out [the White Helmets],” Dujarrik said.

"We are very grateful to the Jordanians, who with such generosity and hospitality accepted these 422 Syrians," he added.

© Sputnik / Morad Saeed
White Helmets Evacuation From Syria Reveals Organization's True Nature - Moscow
"When representatives of the UN High Commissioner did what they always do, in this case, the 422 refugees who were at risk, this is what should have been done and what has already been done for a million Syrians,"Dujarrik said when told that the White Helmets are accused of staging documented instances of the use of chemical weapons in Syria.

The Syrian Foreign Ministry on Monday condemned what it called a “criminal operation” by Israel to evacuate hundreds of White Helmets civil “rescue” workers and their families from southern Syria and added that the operation had laid bare the true nature of the White Helmets’ activity which Damascus had always warned about.

The ministry also noted that by helping evacuate the White Helmets, the United States, Britain, Jordan, Germany and Canada were assisting terrorists.

Syria's supreme mufti Ahmad Badreddin Hassoun, in turn, said that the White Helmets are “war criminals” and urged the Syrian and Russian government to prosecute them.

"These people are not refugees. They are war criminals. I would like to ask the governments of our countries to follow the members of the White Helmets group and find them wherever they are; they used chemical weapons in Douma (and other cities)," the Mufti said.

The Russian Embassy in Israel said that the evacuation of hundreds of White Helmets from Syria reduced the risk of provocations in the form of staged chemical attacks in the southwestern regions of the country.

"442 White Helmet militants and their family members were evacuated from southwestern Syria yesterday. There is at least one positive side to this and the likelihood that the White Helmets will not use chlorine to stage a chemical provocation in southwestern Syria" the Embassy states on its Twitter account.

White Helmets: Who Are They?

The White Helmets organization gained notoriety after it posted videos on the Internet showing men in camouflage rescuing children from under the rubble of bombed-out buildings. However, materials started emerging that indicated that the White Helmets could have staged videos where made-up “victims” of alleged chemical attacks had been instructed what to say on camera.

The Russian Foreign Ministry says that the White Helmets are part of a propaganda campaign aimed at discrediting the Syrian authorities. Syrian

President Bashar Assad has accused the White Helmets of having links to Daesh terrorists.

On Sunday, an Israeli Foreign Ministry spokesman said that, in keeping with pertinent requests from the US, Canada and a number of European countries, Israel had evacuated 800 White Helmet activists and their families from southern Syria where government forces are now wrapping up an operation to flush out Daesh terrorists still active in the area.