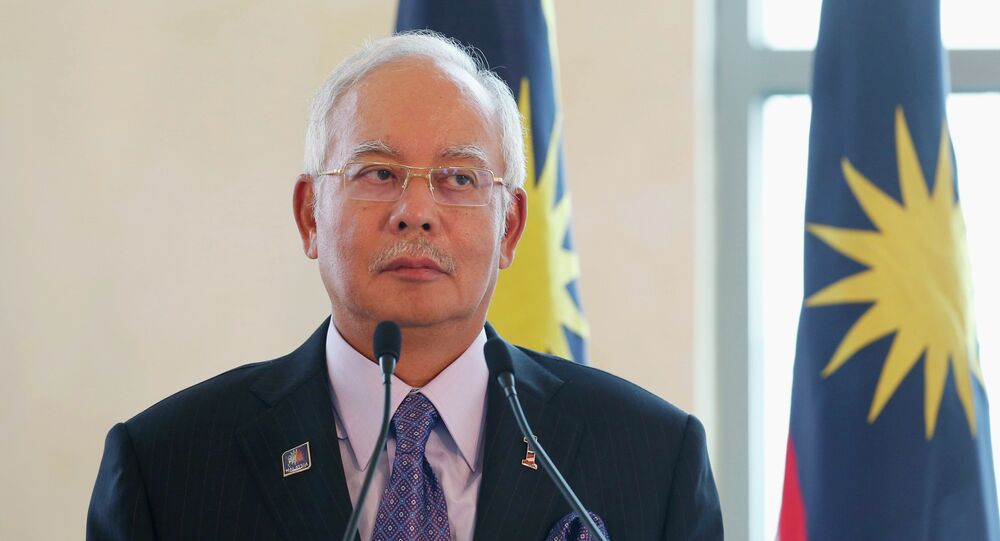 A secret letter has been leaked, sent by the office of former Malaysian Prime Minister Najib Razak to the CIA begging for US help if the then-upcoming May 2018 elections went sour for his ruling coalition. Radio Sputnik spoke with Nile Bowie, a writer and journalist who covers Singapore and Malaysia for the Asia Times, about the revelations.

Najib, who was already embroiled in a corruption scandal that had gutted his popularity, faced a dangerous challenger in the form of former prime minister Mahathir Mohamad, who had partnered up with disaffected elements of Najib's own party and run on a platform of getting to the bottom of the 1MBD embezzlement scandal.

The letter, sent five days before the election, requested US political support in event the election result was either very narrow or too close to call; or if it yielded a hung parliament; or even if it was just a very slim victory.

The letter was allegedly written by the Malaysian External Intelligence Organization (MEIO) and signed by Hasanah Ab Hamid, who also leads a unit under the Research Division of the Prime Minister's Department, Free Malaysia Today reported. It was leaked to the publication Malaysiakini, which published the text of the letter July 19.

However, Bowie noted to Radio Sputnik's Loud & Clear Friday that the letter didn't ask directly for US support, but for recognition.

"It shows how nervous the ruling government was at the time; it sensed this would be a very close fight, and it was pulling out all the stops ahead of this election to sort of suppress the other side," Bowie told hosts John Kiriakou and Walter Smolarek. He described the ways in which Najib's government attempted to deny Mahathir media coverage, including banning candidates' faces from appearing on billboards.

So, Kiriakou asked, what exactly was in the letter?

Najib's government accused Mahathir of the usual litany of offenses that provoke indignation among Western governments. "So what it alleged, what it said, was that Mahathir in the past had been anti-West, he had been anti-Semitic, autocratic, he silenced dissent and disregarded human rights — it basically cast him in the worst possible light."

"Mahathir, in campaigning before this election, he joined the opposition, and he embraced the reform agenda, and this letter said he's not a reformer, and the opposition hopes to use his political capital, his prowess, to defeat Prime Minister Najib's party, the ruling party, that had been undefeated for six decades — and indeed, that is what happened," Bowie noted.

"So, it went on to say that the opposition — now the ruling government — the manifesto that they had articulated regarding foreign policy, the letter predicted that it would undermine bilateral ties between the US and Malaysia; China is an aspect of it too a little later on — and basically the letter casts doubt about the ability of the opposition of the manage geostrategic threats around the world. And unsurprisingly, the letter cast Najib's nine years in power in the most positive light possible, calling his policies sound and progressive."

Bowie quoted a paragraph from the letter that he said perfectly summarized Najib's point: the US needs Malaysia because it has fewer and fewer friends in the region.

"Unlike Mahathir, Prime Minister Najib is known to be a strong US ally and would continue to support US presence in the region. Without Prime Minister Najib in charge of the country, the US stands to lose a reliable partner in Southeast Asia, given that the Philippines has broken away from Washington, Singapore and Brunei being too small to make an impact, and Thailand as well as Indonesia too immersed in their own domestic political problems. Meanwhile, the Indochina countries, except for Vietnam, are too inclined towards China."

He noted that Najib was playing both sides during his nine years in power and how he very much improved relations with the US during his tenure.

But then in 2015, he was implicated in the sovereign wealth scandal, which spoiled relations with the US.

By contrast, Malaysian ties have been increasing with China since 2014, when Malaysia became a top investment destination for Belt and Road projects, Bowie noted.

"Under the Obama administration, we had an attempt to engage this part of the world through the Asia Pivot, through the Trans-Pacific Partnership; that was the whole economic angle in which he tried to engage these countries, through trade and investment and what not. China, on the other side, has the belt and road initiative; it has institutions like the Asian Investment and Infrastructure Bank, it has parallel architecture — parallel globalization, if you will — that is pretty much the only game in town at the moment."

"With Donald Trump coming into power, there has been less emphasis and interest in this part of the world, and accordingly, many of these countries have, over the last year or two, very much sided with China."

Bowie then asked Kiriakou: "You have worked in the CIA; how do you think letter would have been received?"

"If this had been 10 years ago or 15 years ago, my guess is that they would have referred this question, this letter, to the operational component, and they would have probably come up with some sort of a plan to help a US ally," Kiriakou, a former CIA agent, said. "But in this day and age, in 2018, that's just not the way it's done any more."

"The risk of blowback is so severe, especially in an important and developed country like Malaysia, that my guess is that when they received this letter they just decided to ignore it."

1MBD, or 1 Malaysia Development Berhad (1MDB) is a sovereign wealth fund set up by Najib in 2009.

A sovereign wealth fund is used by countries with budgetary surpluses and little to no international debt to invest that money in real and financial assets such as stocks, bonds, real estate, precious metals, etc., instead of keeping the excess liquidity in the form of a money hoard.

Najib is accused of having transferred $700 million — RM 2.67 billion — from 1MBD subsidiaries into his personal bank accounts between August 2011 and March 2015, the Wall Street Journal reported in July 2015. It was supposedly being spent for infrastructure ventures.

Then-Prime Minister Najib held an investigation that cleared him of any wrongdoing, and when several political figures, including his deputy prime minister, Muhyiddin Yassin, criticized his handling of the allegations, Najib fired them. It also suspended the license of a media organization that rigorously reported the case, the Guardian reported.

However, since then, evidence has mounted as more and more officials and associates have come forward with damning evidence that the money had found its way into Najib's own accounts. Muhyiddin even formed a new political party, Pakatan Harapan, which with Mahathir has now toppled the 61-year reign of the Barisan Nasional coalition and is vigorously pursuing charges against Najib and his cohorts.

He's now charged with three counts of criminal breach of trust and one count of corruption, to all of which he has pleaded not guilty.

In late May, the South China Morning Post reported that not only had 1MBD's coffers been gutted, but the previous government had used the sovereign wealth fund, Khazanah Holdings, and the central bank to pay off 1MBD's debt.