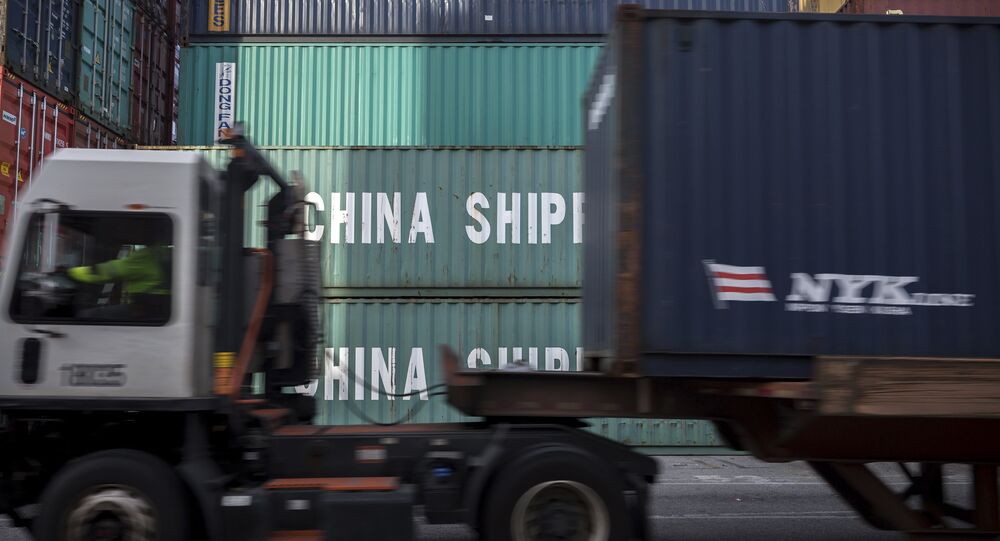 WASHINGTON (Sputnik) - Any move by US President Donald Trump to threaten economic sanctions on China for its trade with Iran could set off global chaos as support for such moves among US allies in Europe evaporates, former CIA officer Phil Giraldi told Sputnik.

"It will be interesting to see what happens when Washington tries to sanction the Central Bank of China over business dealings with Iran — utter chaos on top of the already existing trade war!" Giraldi said on Friday.

The participants in the Joint Comprehensive Plan of Action (JCPOA), also known as the Iran nuclear agreement, confirmed on Friday at the meeting of the JCPOA Joint Commission in Vienna the need to continue the full and effective implementation of the agreement.

© REUTERS / Heinz-Peter Bader
Ex-US Envoy: Vienna Talks on Iran Sanctions May Escalate Global Trade War
The JCPOA participants including the United Kingdom, France and Germany affirmed their support for continued export of Iran’s oil and gas condensate, petroleum products and petrochemicals and for further trade with and investment in Iran, their joint statement said.

However, Giraldi cautioned that that British Prime Minister Theresa May, German Chancellor Angela Merkel and French President Emmanuel Macron could face major pressure from Washington to scrap their ties to Iran, and that they might surrender to it.

"I think this is admirable, but it will come up against the hard reality of US sanctions if Trump pushes the issue, which I think he will do based on recent statements by [presidential adviser Rudy] Giuliani and [Secretary of State Mike] Pompeo that nothing short of regime change for Iran is envisioned by the White House," he said.

Faced with such pressure, May, Merkel and Macron might yield to Washington’s demands, Giraldi advised.

"The Western Europeans will likely crumble because the threat of blocking them out of the US financial system would be too hard a pill to swallow if Trump really wants to make them squirm," he said.

Giraldi pointed out he was concerned that the current major European leader slacked the determination to stand up to trump for their nations’ best interests.

© AFP 2021 / STR
New Trade Pact: What Answer do Asian Economies Have to Trump's Tariff War?
"Of course, the US economy will also suffer greatly, which will be a card they can play, but I do not see leaders of the caliber of Merkel, May and Macron fighting very hard on behalf of what they know to be right and correct relating to Iran," he said.

Trump was listening to extremists on the Iran issue and was unlikely to change direction, Giraldi assessed.

"It comes down to Trump and his God-awful advisers wanting something much more than the Europeans do so they will give in. Russia and China will, of course, do the right thing," he said.