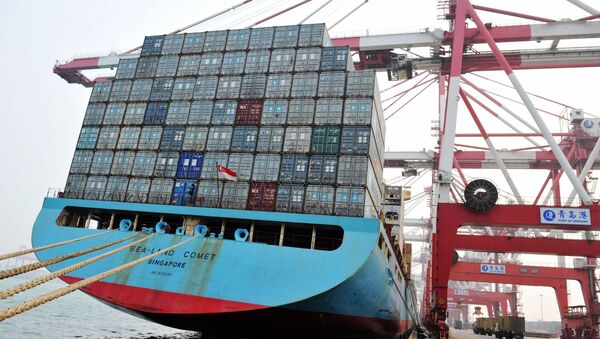 © AFP 2021 / STR
Subscribe
The prime minister of Japan has called for the early conclusion of a regional trade agreement, the Regional Comprehensive Economic Partnership, or RCEP, which is also actively supported by China. Shinzo Abe urged the leaders of 16 Asian nations gathered in Tokyo to speed up negotiations.

The RCEP block includes ASEAN members, as well as Australia, India, China, New Zealand, the Republic of Korea and Japan. Sputnik discussed how much Trump's protectionist position has pushed these leading economies of the Asia-Pacific Region (APR) to demonstrate the region's adherence to the principles of free trade with Russian and Chinese specialists.

Beijing to Become Driving Force for Free Trade Zone With Seoul, Tokyo – Analyst
"As was announced following the Tokyo meeting, the agreement on the establishment of the Regional Comprehensive Economic Partnership (RCEP) could be signed within a year. Meaning we can talk about serious progress in the negotiations on the RCEP," Andrey Karneyev, deputy director of the Institute of Asian and African Studies at Moscow State University, told Sputnik.

"The result is quite predictable, and it is not necessarily related to Trump's recent actions to undermine the norms of international trade. Mistakes were made also by the previous administration of Barack Obama, who openly opposed the two negotiation processes — for the Trans-Pacific Partnership (TTP) and for the RCEP.

China played an active role in the negotiation process for the RCEP. And the Americans actually put their partners before a choice — either you play by our rules, and keep up the pressure on China, or choose an alternative integration format. As noted by many experts, this tough ultimatum has caused confusion even among countries bound with Washington by military-political agreements. Many governments considered the two formats to be mutually complementary and were not ready to choose between the US and China."

The pressure was put on Asian nations with regard to Russia too, according to Karneev:

"The practice of using pressure, which, by the way, spread to relations with Russia, raised alarm bells. The Americans actively pressured Asian countries, and above all, big business and banks, urging them to follow Western sanctions against Moscow. In this approach to Washington's trade and economic policy, many countries of the APR rightly saw evidence of the promotion of solely US interests. Despite the change of rhetoric and priorities, little has changed under Trump, except that confidence in the US has become even smaller. Therefore, in a joint statement adopted at the Tokyo meeting, it is noted that against the backdrop of the unilateralism facing global trade today, it is crucial to conclude the negotiations on the RCEP as soon as possible."

China Trying to Shield World Economy From Dangerous US Attacks - Analysts
China was represented at the meeting by a delegation that included representatives of the Ministry of Commerce, the State Committee for Development and Reform, the Ministry of Industry and Information Technology, the Ministry of Finance, the Ministry of Agriculture and Rural Affairs and the General Administration of Customs of China. The long list of government departments represented suggests that it is not an abstract desire to see a new trade bloc, but a serious advance towards practical agreements.

For Beijing, progress in negotiations on the RCEP is now particularly important against the backdrop of ongoing Chinese-US tensions in the sphere of trade. But how will this affect the position of the United States in the region if an agreement on the creation of the RCEP is signed? This question was answered by Jia Pujing of the People's University of China.

"Trump's trade unilateralism poses a threat to the global economy, which for decades has been based on a multilateral trading system and even to some extent Trump has caused serious damage to it. The relative success of the RCEP negotiations gives grounds for hope for the signing of an agreement within a year. Many countries are now determined to protect the multilateral trading system. Naturally, this is due to trade provocations by Trump on a global scale. The signing of the agreement on the RCEP will contribute to the integration of the market of the West-Pacific Region, that is, the entire market of Northeast Asia, and will seriously help regional economic and trade development."

But Jia Pujing also says that it's important to  distinguish between what America says and what it does:

"Judging by their words, the United States stands for withdrawing from multilateral trading systems, including the World Trade Organization, emphasizing bilateral trade negotiations. However, if we look at US actions, they have not yet created new trade structures, even the advancement of bilateral negotiations with Japan and other allies has not yet been marked by any success. The functioning of the American economy continues to take place within the existing multilateral structures. Therefore, the RCEP can also become useful for the US in the future," Jia Pujing concluded.