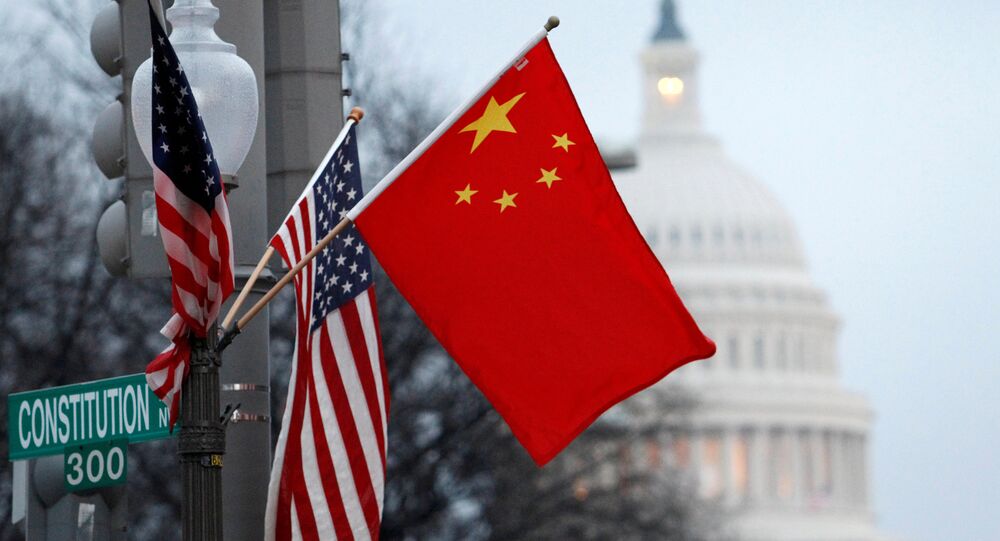 MOSCOW (Sputnik), Tommy Yang - Despite facing similar threats from US President Donald Trump’s trade policies, the European Union is unlikely to join forces with China to form an anti-US alliance, as competition for market share in the rest of the world due to US trade barriers is expected to rise, analysts told Sputnik.

During recent meetings with EU officials, senior Chinese officials, including Vice Primer Liu He, who is Chinese President Xi Jinping’s top economic adviser, and Foreign Minister Wang Yi, proposed to form an alliance between China and the European bloc to fight against aggressive trade policies coming from the Trump administration, according to media reports on Tuesday.

EU officials rejected China’s proposal and stressed that the EU would not "pick a side" between Beijing and Washington, an unnamed European diplomat was quoted as saying.

Economists explained that European companies are expected to face steeper competition in both domestic markets and global markets from Chinese companies, as both sides would seek to find new markets to compensate losses from growing trade barriers in the United States, making a trade alliance unlikely.

"The main battle ground on trade in the future will be in Africa. I think the EU should devote more attention to the region as it does today. This [Africa] will be the main area of confrontation on trade between the EU and China. The problem is, for example, there’re some Greek companies are trying to compete against Chinese companies in Africa. But they cannot compete against one third of the prices, which Chinese companies are offering," Panagiotis Petrakis, professor in the Department of Economics at the National and Kapodistrian University of Athens, told Sputnik.

Chinese scholars pointed out that EU nations could also start to have concerns about overflow of Chinese products into their domestic markets, as Chinese companies start to look for new markets globally amid higher tariffs in the United States.

"There’s another problem the Europeans are very worried about, which is that they [EU nations] would become collateral victims in the trade war between China and the United States. They’re very concerned about Chinese companies could flood their products into the European markets, after the gate to the United States has been shut. This could bring a great amount of pressure to European companies," Ding Chun, director of the Center for European Studies at Fudan University in Shanghai, told Sputnik.

Nevertheless, the Shanghai-based expert added that China could try to win the European Union over to their side on specific issues, such as protecting the multilateral global trade system, rather than trying to form an alliance on trade with EU nations.

China’s rapidly expanding investments in Europe, especially in central and eastern European countries, in recent years, as part of the ambitious Belt and Road Initiative championed by the Chinese president, have raised alarm in many Western European nations, such as France and Germany, with a strong voice in the bloc.

China has been trying to improve transparency of the decision-making process in those investment projects to help ease concerns among Western EU nations that Beijing is trying to drive a wedge within Europe, Professor Ding suggested.

"The EU has always expressed concerns about Chinese investments in central and eastern Europe. China has tried to make it clear that it never intended to split or drive a wedge among EU nations. That’s why the Chinese side has been improving the transparency on how we decide where to invest. We need to convince the big nations in Western Europe that this [Chinese investments] could be a great opportunity, as opposed to simply being part of China’s geopolitical program," he said.

"My understanding is that major European countries recognize this [Chinese investments] is a grand plan from China and the Chinese side has the sufficient funds and execution capability to push it forward. If they decide to hold out, they could lose because of being left out. Without a better option, they have to try to take a share in it. But they also don’t want appear to be serving China’s agenda. It’s a very self-contradictory situation for them. That’s why both sides need to make concessions and trade-offs," he said.

As China takes the initiative to improve trade relations with the EU, some economists suggested that the situation offers EU nations a great opportunity to bargain for greater concessions from Beijing, from increased market access to fairer trade practices.

© AFP 2020 / STR
Europe, Australia Will Be Collateral Damage in US-China Trade War – Economist
But the division among EU nations, as demonstrated through different attitudes toward Chinese investments, makes it difficult for the European Union to find a common voice, when negotiating with China over trade issues, professor Petrakis pointed out.

"The question is who is going to bargain with China from the EU? The Germans, the French or the Italians? The EU is not just one state. That’s why it’s very difficult to develop concrete policies. Actually, the EU does not have any external policy and keeps a very low profile globally. We’re very far from the age when the EU would bargain and act as a concrete state," he said.

The expert added that it is better for European Union to prioritize avoiding increased confrontation against the United States, which is still an important strategic ally.