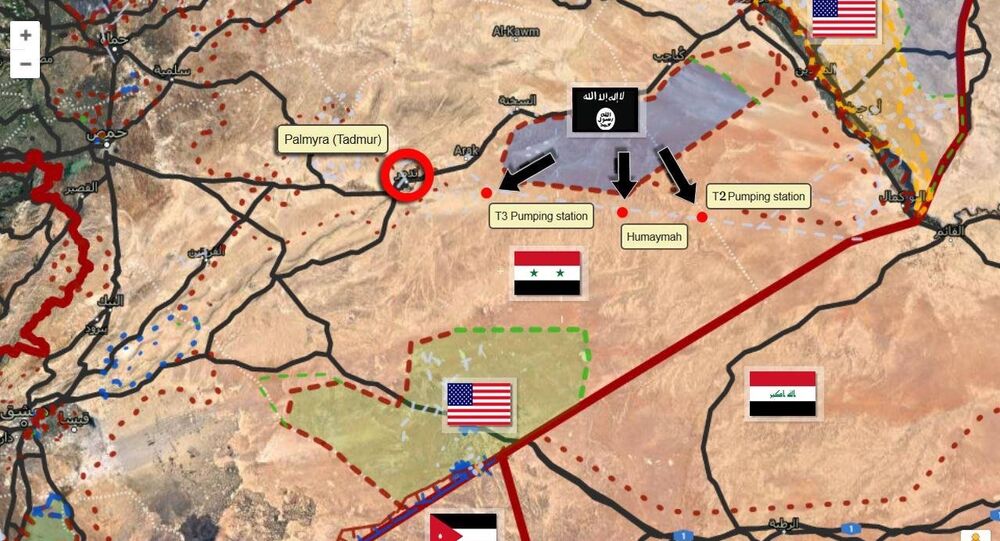 Earlier, a Syrian military source told Arab media that Daesh (ISIS) had launched an offensive in the direction of the ancient city.

Speaking to Sputnik Arabic, Syrian military observer and Major General (ret.) Muhammed Abbas warned that the US was making an effort to seize control of Syria's border with Iraq to sever ties between the two countries.

For this purpose, he said, clashes are being provoked between al-Tanf, Homs province, where the US has a base, and the eastern part of al-Suwayda province in Syria's south.

"The US is working to continue the war in Syria. It's quite possible that Palmyra can again become the target for an attack. Because the seizure of Palmyra would shake the stability and security that the Syrian government has provided there over the last two years," Abbas said.

© AP Photo / Hammurabi's Justice News
In this photo taken on Tuesday May 23, 2017, provided by the Syrian anti-government activist group, the Hammurabi's Justice News, which has been authenticated based on its contents and other AP reporting, shows a U.S.-backed anti-government Syrian fighter form Maghaweer al-Thawra stands on a vehicle with heavy automatic machine gun, left, next of an American soldier who also stands on his armored vehicle, right, as they take their position at the Syrian-Iraqi crossing border point of Tanf, south Syria
© AP Photo / Hassan Ammar
US-led Coalition Strikes Civilians in Syria, Leaving Eight Dead - Reports
According to the retired officer, "the Americans continue to support various armed groups implementing their plans in the region. All of them are connected in one way or another to the American military company Blackwater (Academi), and represent the 'alternative Syrian Army'," Abbas added.

Abbas suggested that the recent spate of attacks in southeast Deir ez-Zor, near the Russian base at Khmeimim, and at the T2 and T3 Pumping stations are all signs that US-backed jihadists "are ready to open a new front both in the south of Syria in the direction of Daraa and in the north toward Idlib."

As for Palmyra, this city carries a special strategic and symbolic significance, the officer stressed. "If it is seized, this would have a major resonance. At the moment there is an opportunity for them to carry out this operation, because the US has forces at al-Tanf, in Rukban, and in areas controlled by the Syrian Democratic Forces on the west bank of the Euphrates."

The officer warned that the US could assist its allies by creating electromagnetic jamming to conceal their movement, making it impossible for large troop concentrations to be picked up by Syrian forces and their allies. "In addition, they can use cloud cover and dust storms for this purpose. We need to keep all these factors in mind in order to track such movements in time," Abbas said.

Last week, a Syrian military source told Al-Masdar News that Daesh launched a major offensive east of the T-3 Pumping Station to the east of Palmyra. 26 Syrian troops were reportedly killed in the terrorist assault. The Syrian Army has deployed additional forces to Deir ez-Zor province to head off any possible attack.

Daesh seized Palmyra in May 2015 and then again in December 2016 in its tug-of-war battle for the city against Syrian government troops supported by Russian airpower. During their occupation of the ancient city, the jihadists destroyed dozens of artefacts and entire sections of the UNESCO World Heritage Site.