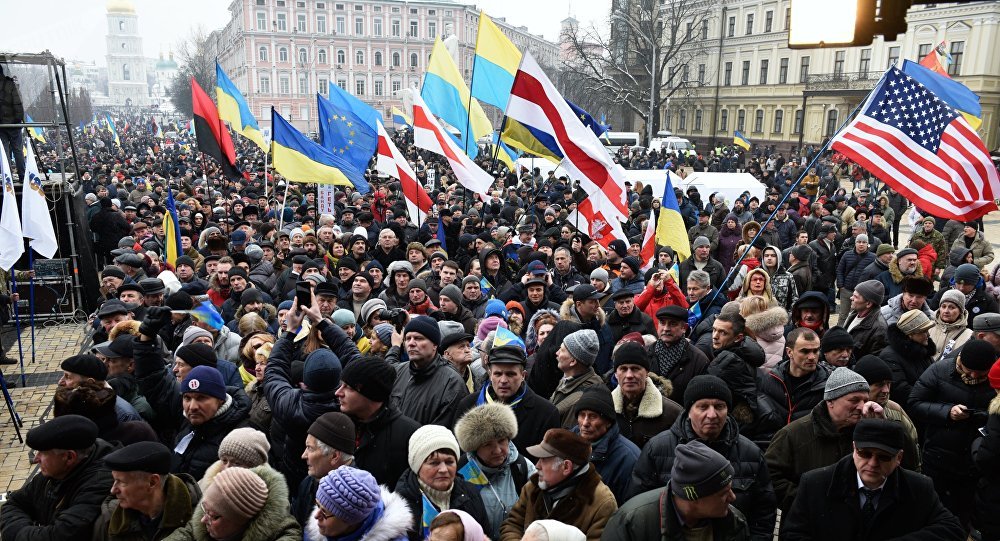 Sputnik and RIA Novosti Ukraine have been added to Ukraine's sanction list. Kiev also blocked access to Rossiya Segodnya, Sputnik News and other Russian media sites. According to reports, the Russian parliament will appeal to international organizations. Sputnik discussed this with Stephen Ebert, an independent political analyst.

Sputnik: What are your thoughts on the measures taken by Kiev?

Sputnik: Some experts have noted that this is another attempt to stir up Russophobia as Russia prepares to host the FIFA World Cup, what's your take on the matter?

Stephen Ebert: I absolutely think that the topic of what could we expect is a good one, as paranoid as I am, I'm not terribly sure if this is a concerted effort right before the World Cup, as I said, I'm just never surprised, every day bring something new, it could be part of a bigger plot, but as I said, I don't think it's unexpected.

© AP Photo / Efrem Lukatsky
Old Habits: 'USSR Blocked Western Media, Modern Ukraine Blocks Russia's' – Writer
Sputnik: Ukrainian investigators have stated that they will not release proof of Russia's involvement in the incident, why is that?

Stephen Ebert: I have predicted this for sometime, if we look at the United States' actions we made a fatal mistake in "presenting evidence" on weapons of mass destruction and so from what I see in the West's reaction to anything that happens is before the plane hits the ground jump up-and-down and scream that the Russians did it, and the next day scream that we have all the evidence to prove — and just kind of keep that up. I would say that if we look at the Syrian alleged chemical attacks, the poisoning of the Skripals — there's just never going to be any evidence, I think that's sadly pretty clear and that's why Russia's evil and you don't provide evidence to evil people.

Sputnik: Moscow said that it would appeal to international organizations over this issue; however, the situation with the arrest of the head of RIA Novosti Ukraine has not been covered a lot by Western media, will the situation be different this time?

Stephen Ebert: Well I'm certainly following the United States, the home of freedom, free press, all that stuff and there is zero coverage of this in the United States, as you can expect. There was zero coverage of the Ukrainian journalist who was gunned down on the streets of Kiev here in the US, so, A, I wouldn't expect anything, and, B, I would advise Russia and the world to buckle their seatbelts, we're going through some pretty escalating conditions at home around attacks on free press and media, so we certainly never ever have stepped up to defend the rights of any country or regime, as we call it, to have their own media coverage, and as I said thanks to our new president, we're entering into, what I would call, the dark winter here in the United States. I wish Russia luck, I believe that no one‘s going to pay any attention to any complaints filed. It's happened before, the journalist kicked out, thrown out repeatedly over the last four years, and not just Russian, I can't remember all the incidents, but I think I can recall there were some Germans or Italians who got put back on planes effectively. The West has made their bet with the devil and they've gone this far with Ukraine, I just can't see them waking up.

© AFP 2019 / KIRILL KUDRYAVTSEV
Italian Reporter Slams Arrest of Russian Journalist in Ukraine as Example of 'Lawlessness After Maidan'
Sputnik: What response can we expect from the European Union and the United States after Ukraine accused Mr. Vyshinsky of treason and added Russia's media to the sanction list?

Stephen Ebert: I think that they'll continue to do largely what they've been doing, which is just to ignore it. Personally, I don't see that there's a lot in it for them to jump on Ukraine's side, and, as I said, they're certainly not going to jump on the side of global press freedoms or anything else, so what I would expect is they'll just continue to turn a blind eye and say to the Ukraine: "As long as you continue to be a thorn in Russia's side, you can continue to take our $10 billion a year, please, and continue to cause problems with gas transit pipelines, etc." I don't see an increase in sanction activity based on that because to me that would be kind of silly, I just think they'll be just totally ignoring the situation.

Ukraine, Michael Cohen and the Reality of 2016 Election Interference