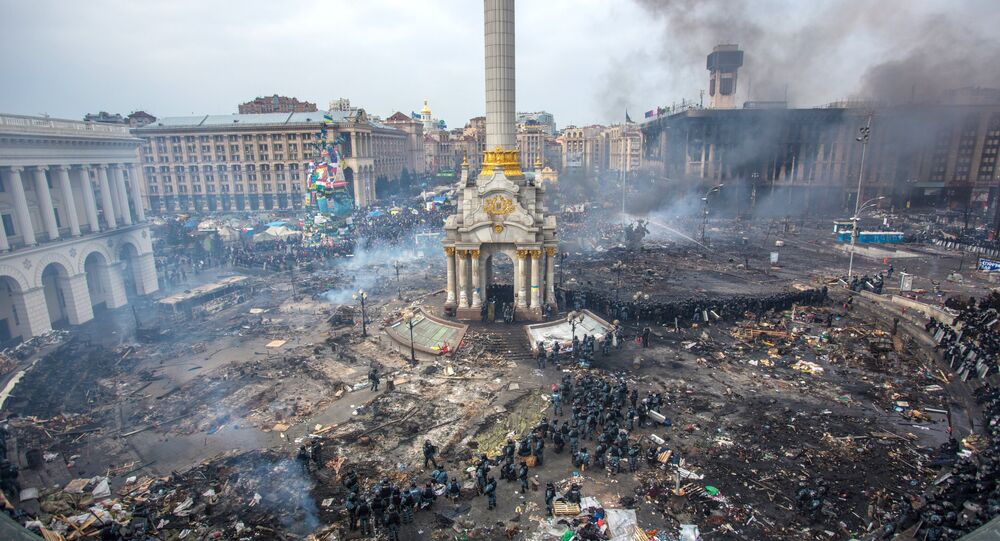 Member of Germany’s ruling party Christian Democratic Union (CDU) Willy Wimmer stated that the state coup, that happened in Ukraine in 2014 in Ukraine, was organized by the West.

Wimmer is currently visiting Crimea as a member of a delegation of lawmakers and businesspeople from Germany and Austria.

"What happened in Ukraine in 2014, that coup – it was backed by huge capital, big investments were made to set up that coup, and it was organized by the West," Wimmer, who is the former state secretary to the German defense minister, said during his meeting with Republic of Crimea Head Sergei Aksyonov.

The lawmaker added that the sanctions against Russia were unfair.

© Sputnik / Evgenia Novozhenina
Three Years After Euromaidan: Life in Ukraine 'Has Become Considerably Worse'
Former Ukrainian President Viktor Yanukovych was removed from office in February 2014 after months of protests in Kiev's landmark Maidan square, with violent clashes between the protesters and law enforcement officials having claimed the lives of some 100 civilians. Crimea refused to recognize the new government and seceded from Ukraine to rejoin Russia after a referendum that took place in March 2014, with over 96 percent of local voters having supported the decision.

Kiev, as well as the European Union and the United States, did not recognize the move and considers the peninsula to be occupied territory. Following the referendum, the European Union imposed economic sanctions against Russia, and Moscow introduced countermeasures against the EU member states that supported the sanctions.

Ukraine: Three Years After The Coup

Ukraine 2014 Coup Made No Major Changes Except Change of Power

'Most Obvious Coup in History': Ukraine in Chaos