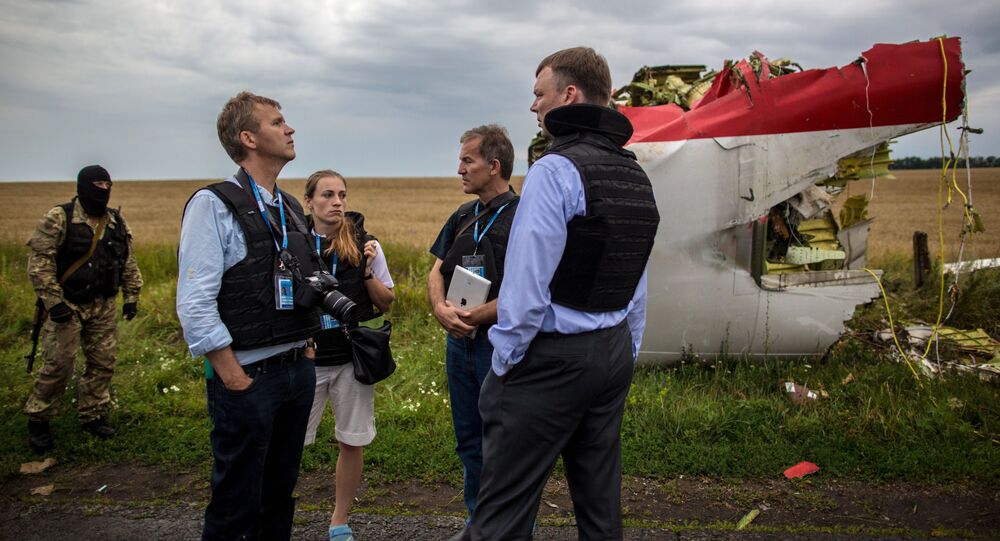 French public figure Nikola Mirkovic, commenting on Dutch investigators' allegations that they have obtained strong evidence that the missile system that downed the MH17 flight over East Ukraine in 2014 was part of the Russian military, has told Sputnik that Ukraine should not be included in an investigative team.

Nikola Mirkovic, head of the Ouest-Est (West-East) organization engaged in humanitarian projects in eastern Ukraine's Donbass region, said that "from the very beginning, one could see the desire of those investigators to blame Russia [for shooting down the MH17 flight]."

"After three years of difficult work, the investigators claim that Russia is to blame. It should be understood that prosecutors and policemen from the Netherlands, which is a NATO member as well as another NATO member-state Belgium and – paradoxically — Ukrainian lawyers and policemen are involved in this investigation," Mirkovic said.

He recalled that Ukraine is also accused of downing the plane, so the question arises "what are they doing in this investigation group?"

"This indicates that the court is not necessarily unbiased [and] I want to add that, in addition to everything, they did not provide evidence," Mirkovic stressed.

He said that "if there really is a desire to find the perpetrators, it is necessary to create an investigation team which will be beyond any suspicion and which will be financed neither by NATO nor Russia."

Pointing out that Russia does not have access to the MH17 investigation material which is not the case with Ukraine; Mirkovic said that he does not believe in the investigative group’s neutral stance.

"Considering those who are behind this group, I cannot believe in its neutrality. Maybe they are right or wrong, but in any case, I do not believe that they adhere to a neutral position," he emphasized.

Touching upon the Buk issue, he recalled that it is a Russian-made missile system so "it is quite possible that missiles launched by it were also made in Russia."

At the same time, he underlined that in this case, one should pay close attention to those who used this weapon rather than those who produced it, recalling that the BUK missile system "is used across the entire territory of the former Soviet Union."

The Russian Foreign Ministry has expressed regret over the Dutch investigators' allegations, saying that the Dutch-led Joint Investigation Team (JIT) has ignored a significant amount of information, including radar monitoring data that cannot be manipulated.

© Sputnik / Andrei Stenin
MH17 Probe: 'Everything Points to the Ukrainian Side' – Analyst
"In these circumstances, we have legitimate questions about the true reason for the JIT decision to announce the preliminary conclusions of the probe. In our opinion, all this only confirms our earlier concerns about the biased and one-sided approach to the ongoing investigation," the Ministry said.

Earlier, Wilbert Paulissen, head of the Dutch National Police's Central Crime Investigation department, claimed that the missile, which shot down Malaysia Airlines Flight MH17 in eastern Ukraine in 2014, had been launched by the BUK missile system operated by the Russian military.

Dutch Chief Prosecutor Fred Westerbeke, for his part, has made it clear that the investigation team will not disclose the evidence allegedly uncovered.