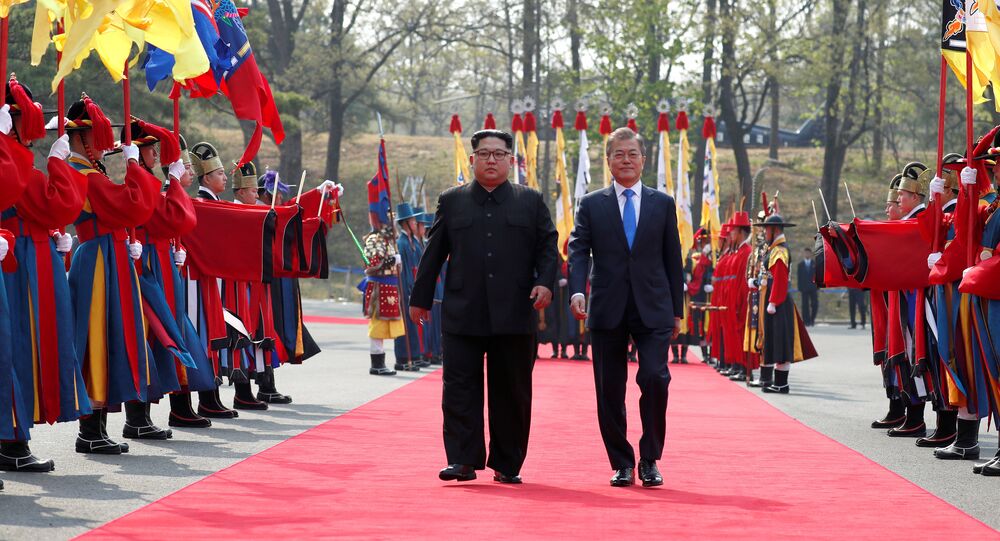 Sputnik: How significant is this summit and then apparent rapprochement between North and South Koreas?

Stephen Nagy: The optics today was absolutely amazing with Presidents Moon and Kim shaking hands, moving on each other’s territories. It set a good tone for moving the discussions forward. It sets the stage for further discussions, further dialogue and for deconstructing the mistrust that has been in the region over the past 60 years.

Sputnik: There were previous attempts to make peace with t5he West during the reign of Kim’s father. Do you think this meeting is significantly different and if so, why?

© REUTERS / Korea Summit Press Pool/Pool
Kim Jong-un Hopes For Unification as Koreas Agree to Discuss Replacing Ceasefire With Peace Treaty
Stephen Nagy: I think on the South Korean side we have seen President Moon engaging in [attempts to mend fences with the North] in a very intense way inviting North Korean athletes to the Winter Olympics, hosting Kim and his sister. These were significant steps to warm relations on the peninsula. On the other side of the peninsula, in the North, we still have a long way to go in terms of creating trust. We had some talk about  de-nuclearization; we had talks about moving towards a permanent peace treaty between the two states. But we haven’t seen any movement on the ground towards de-nuclearization, about moving out military capabilities. We should also understand that the North [has] short-range missiles, long-range missiles and submarine capabilities that can project power to the US’ allies within the region.

Sputnik: The two countries are still at war effectively. They have just had this armistice. They have decided to sign a peace agreement later this year. Do you think that this piece of paper is going to make a big difference in the lives of people on both side of the border?

Stephen Nagy:  We can have a peace agreement between the two Koreas and there is also an armistice agreement originally signed by China, the United States and the UN to officially end the war on the peninsula. The US and China have  their own distinctive interests on the peninsula, which I think may complicate the process  of moving towards a permanent peace treaty. This is possible if they all come to the table  and begin the process of confidence-building.

Sputnik: Do you think Kim Jong-un has just succumbed to sanctions which have been very severe for his country and with China coming on board with [its own sanctions]. What do you think is really behind this?

Stephen Nagy: Well, there is no doubt that the change in tone from Washington since the election of President Trump has been a significant factor in ramping up pressure on North Korea. Trump’s campaign has brought together Japan, South Korea and China and other countries, including Russia, to increase pressure, increase dialogue that affected the North Korean government in a negative way. Pushing China to the negotiating table to use its leverage on Pyongyang has been very important. China has probably moved the most in terms of putting pressure on the North.

Sputnik: What do you make of the personal relationship between Presidents Kim and Moon?

Stephen Nagy: It seems that there is some kind of sincere bond between them. President Moon has North Korean roots and the reconciliation campaign is very close to his heart. I think that Mr. Kim also demonstrated diplomacy when he welcomed Mr. Moon back into North Korea. They general seem to be interested in changing the tone on the peninsula. They have very serious security issues to deal with after 60 years of mistrust. This will take dialogue, confidence-building measures and a lot of behind-the-scenes diplomacy to push these relations forward.