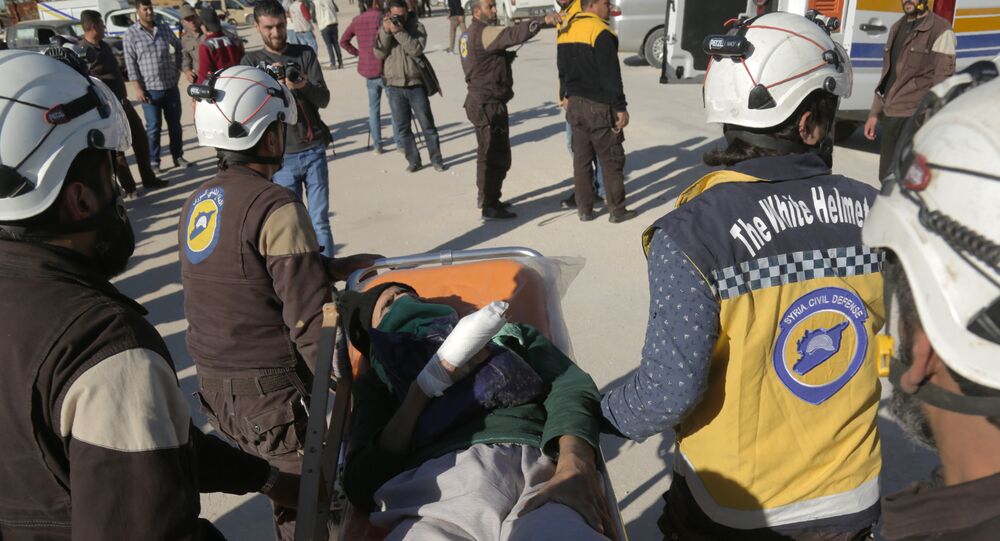 Chemical Attack in Douma Was a 'Pure Fake' – Analyst

After unqualified reports emerged from Douma that the Syrian government had used chemical weapons against its own people, Western mainstream media once again said that Bashar Assad was guilty of war crimes. Any alternative accounts were simply dismissed as 'propaganda. Sputnik spoke to international relations expert Xavier Moreau for more.

Sputnik: Since the alleged chemical attack in Douma earlier in the month, we've heard conflicting reports coming out of the now government controlled city. Some have said that Syrian government forces dropped chemical weapons on civilians, but other reports — corroborated by doctors on the ground in the hospital where the victims were allegedly treated — say that there were no chemical weapons, and that the attacks were staged — what is your opinion on these competing accounts, and what is closer to the truth in your mind?

Xavier Moreau: In my opinion the chemical attack is a pure fake from the White Helmets. The problem is that the White Helmets are English structure that was built by the former MI6. So we perfectly know that it's a complete fake but the problem is that now it seems the phase is over and for instance, you should take Emmanuel Macron in France, he doesn't want to talk about it anymore. All the media in France have closed this affair, it seems to that it's no longer possible to talk about it.

Sputnik: While we have these competing accounts, the more mainstream news outlets seem to have already decided — even before the OPCW investigators have been able to investigate their mission — that there is only one narrative, and that is that the Syrian government deployed chemical weapons against its own people — what do you think explains this unwillingness on the part of the mainstream media to take other accounts of the situation in Syria seriously?

© AFP 2021 / MOHAMED EL-SHAHED
Qatar Obliged to Send Troops to Syria to Keep Being Protected by US – Riyadh
Xavier Moreau: In my opinion, Paris, London & Washington have perfectly understood that they lost in Syria; that the Syrian army with Russian and Iranian allies have won this war. So they just want to get back into the deal, into negotiations, so they tried something not very original. Because actually they already tried a year ago and in 2013, they tried to explain that Assad wants to use chemical weapons. Actually this narrative is completely counterproductive because everybody who understands what is happening in Syria knows that Assad has no interest in using chemical weapons. But in my opinion, seeing that France, England & Washington tried to tell us that the Syrian army and Assad want to use such a weapon — it is evidence that they lost the war and they know it. They just want to get back to the negotiations table. Actually, Paris represents nobody in this conflict anymore. People they are supposed to represent, they are in Turkey in a hotel in Ankara or in Istanbul. On the land in Syria, they represent nothing on the military front or the political front. So at this point, Paris, London & Washington try to use any kind of leverage they have to try to get back to the negotiation table.

Sputnik: And finally, if the OPCW comes back with results than run counter to the mainstream narrative, would you expect the large news outlets to change their tune, or continue as they have?

Xavier Moreau: I think that they will continue to propagate this lie. Even they won't speak about it, and if you observe what happens in France now, it is exactly the case: I told you, the phase of this chemical attack, bombing and shelling Syria is over now. And neither Macron, nor Theresa May nor Donald Trump want to talk about it anymore, because of course the fake news is completely compromised and they have no interest to talk about it. So no, we will go back to the Skripal case and take some decision about the Skripal case. And so, they will continue the lie or they won't talk about it anymore. That's what's happening now actually in France, they don't want to talk about it.