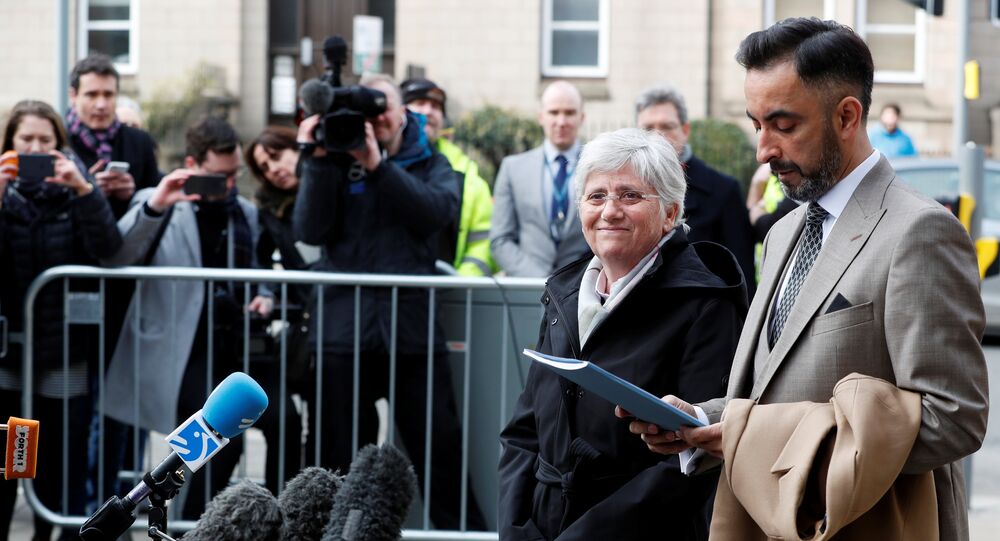 A Scottish judge has decided to postpone the decision regarding the extradition of the former education minister of Catalonia. Clara Ponsati appeared at Edinburgh Sheriffs Court today, where her lawyer Aamer Anwar defended her right to freedom and condemned Spain’s decision to hold political prisoners. Sputnik spoke with Aamer Anwer about the case.

Sputnik: How did it go at the hearing on Thursday, are you pleased with the outcome?

Aamer Anwer: Yes we are very pleased. At today's hearing we advised the court that we intend to fight the extradition on many grounds. Including fundamentally that the Spanish authorities are guilty of an abuse of the process and a full hearing is now set to take place on the 30th of July for two weeks with preliminary hearings in the months of May and July.

© AP Photo / Frank Molter/dpa
Puigdemont Pledges to Stick to Ideas of Catalonia's Independence Despite Arrest
In summary, we will argue that we seek to charge the validity of the warrant, as the facts show that there was no offence committed by Clara Ponsati. The crime of violent rebellion doesn't exist in Scottish law. We'll also argue that the warrant has been issued for the purpose of prosecuting Clara for her political opinions, and also that if she is returned back to Spain then it would be unjust, oppressive, and incompatible with her human rights.

Sputnik: You have condemned the treatment of Major Josep Luis Trapero — do you think that the fact that Germany and Scotland have not recognized charges of ‘sedition' could this have an effect on Trapero's sentencing?

Aamer Anwer: I believe that when the Spanish Authorities started on this mission, (which looks very much like an attempt to criminalize the aspirations of Catalan people for independence); they didn't actually understand what the backlash would be. They didn't realize there would be such international scrutiny of the Spanish authorities, because up until they started this process, a lot of people didn't even know what was going on in Catalonia. It's come as a real shock to people throughout Europe, because most people will consider that this is something that happens in places like the Middle East, or in third world countries. Yet this is actually happening in a so-called civilized, European democracy. So they are under a glare of publicity, and I think it is shocking the way that this police officer is being treated when he was fated as a hero following the Barcelona attack. His officers put themselves in the line of fire, put their lives at risk, and he did what a police officer should do. He took an oath to serve the law, to serve the public. It is not the job of a police officer, especially the chief police officer, to simply follow orders that are unlawful and illegal, which means sending batons, truncheons, riot vans into a peaceful crowd.

Sputnik: What do you expect to happen on the 30th July on the full hearing?

© REUTERS / Lehtikuva/Markku Ulander
Catalan Parliament Recognizes Puigdemont’s Right to Lead Catalonia - Reports
Aamer Anwer: We are determined to fight; and our instruction is to fight on behalf of Clara. We believe that this warrant is a politically motivated prosecution of Clara. She is accused of orchestrating violence, yet they cannot point to a single act of violence or incitement that is actually attributed to her. They have said nothing about the actions of several thousand Spanish police and six thousand state security forces that carried out unprovoked attacks on peaceful Catalans. We recognize that we have an uphill struggle, but we are determined to fight. Clara Ponsati is full of determination and resolve. She said that she understands that she is fighting for her liberty.

In conclusion, if Clara is extradited and convicted, she faces up to thirty-three years in prison, which is really the rest of her natural life. And she recognizes that her fate is linked to the struggle of the Catalan people for freedom. Absolutely, we are determined to fight, and our client is full of resolve to do so.