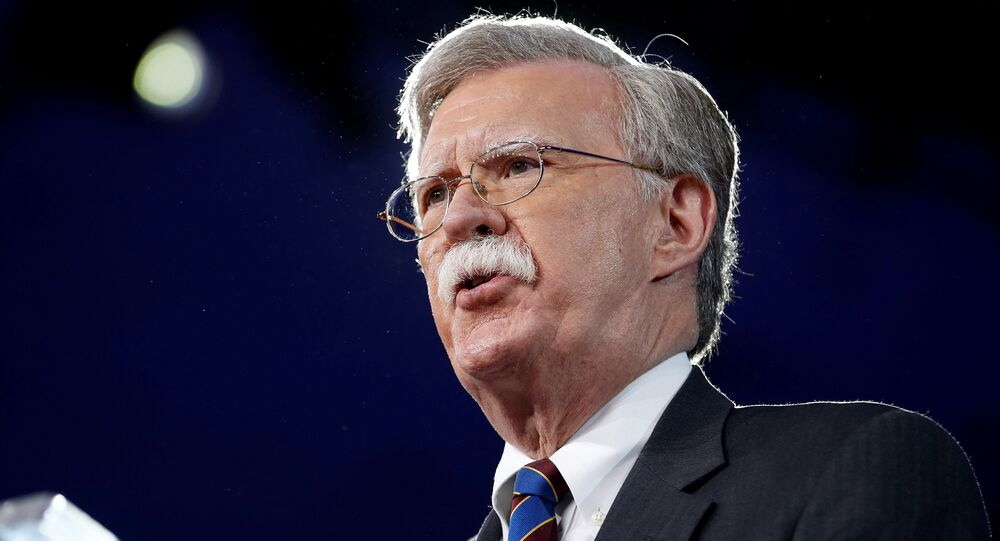 On March 23 Trump announced the replacement of his National Security Adviser with the prominent neoconservative “hawk” and former US Ambassador John Bolton, who is known for his harsh criticism of Iran and North Korea. Sputnik discussed his appointment with Michael Patrick Flanagan, former US Congressman, Founder and CEO of Flanagan Consulting.

Sputnik: What's your take on John Bolton's appointment? What does it mean for Washington foreign policy?

Michael Flanagan: I think foreign policy from this administration is still going to be very much about Trump. You're going to have a great deal of difficulties finding a Bush doctrine, a Reagan doctrine or a Clinton doctrine inside of this foreign policy. It is very personally driven and he needs assistance, helpers, secretaries, cabinet level people around him, who can help him give voice what he wants done personally. I think that these selections you're seeing by Mr. Trump are very much in that vein in that category and they shouldn't be troublesome.

He has a CEO mentality of how he hires and fires and unlike a politician that puts great stock in having the same people around him year, over year, over year, for continuity, in continuation purposes, CEOs change quite often as the moment changes, the situation changes and as the changes in that case in the market, but in this case in the worldview change, we need different men for different jobs. I think Trump hires and fires in that way. It looks capricious, but I think there is method to the madness.

Sputnik: John Bolton is not particularly pro-Iran. What does this appointment mean for the Iran deal?

Michael Flanagan: The president has never made a secret of his disdain for the Iran deal, but he has ratified it. We are going to have rather than a soft eye attitude that would come from the Obama administration that would tend to look encouragingly on whatever Iran does, I think you will have a very sharp eye on whatever Iran does and, so far as the deal goes, they will be forced to stay to the very letter of the law right down the line or which will pull the trigger, ending the deal just as quickly as he can and Bolton is the guy to do that.

Sputnik: What can we expect in terms of relationship moving forward towards Russia in the future from Washington's point of view?

Michael Flanagan: I think and I have stated this all along and still believe it's true that we will move forward together with Russia, with Europe, with China. The singlemindedness of a political solution to international relations has sort of "I love you — I hate you" kind of face to it. And they can't be both at the same time. The Chinese and the Russians are far more adept, being able to carry on with difficulties in this area and be friendly in another areas and being able to work towards this goal and be antagonistic in other areas.

We are not good at that. But I think Trump is and I think Trump is able to actually try and carry on very good relations with China, while having these great difficulties over trade. And I think we are going to be able to do many things together with the Russians, I think we are doing things together with them now, particularly on a Korean Peninsula, while still having our difficulties along the way and trying to support our allies in Europe at the same time. I trust that Trump has a view that will allow us to be able to actually grow in our ability to conduct foreign policy successfully with people far better at it.

Sputnik: One of the successes that president Donald Trump has had is having the opportunity to sit in front of North Korean leader Kim Jong-un and this specific strategic meeting they going to hold together sometime in the near future. Some commentators and experts are rather indifferent to it, they would rather continue with the rhetoric and the conclusions as to the elitist liberalizations that are controlling the American administration. What's your take on it? Is it good thing that these two leaders are getting together or would it be better for America to continue with this rhetoric?

Michael Flanagan: I think those people you are remarking, if Barack Obama had achieved that they would be sending messages to Oslo to get him another peace price. I think this kind of sour grapes on their part. This is a very very significant achievement. We have a North Korean leader not just talking about ending the war, finally. The war never was ended formally, by the way. The second division is sitting in Korea is staring across the DMZ for 60 years. He is also talking about reunification. He used those words. He is talking about trying to pull back and to re-enter the ceased to be the Hermit Kingdom and re-enter the family of nations. There is a long way from any of that happening. […] But the mere fact that these talks are willing to happen, when they have never been willing to happen before. Nobody has ever said Barack Obama or George Bush let's sit down and have talk. […] These guys never got that opportunity.  They were busy bribing him with food supply and other things in order to try and secure a good behavior for the next few years so the next administration would have to deal with them. Trump is taking this in the teeth. And I think this is going to be widely successful. It would be a bumpy ride, as it always is with Trump, but I think we are pulling one of the great nuclear rogue powers in the world back from the edge and may be into a place where we can deal with it directly.