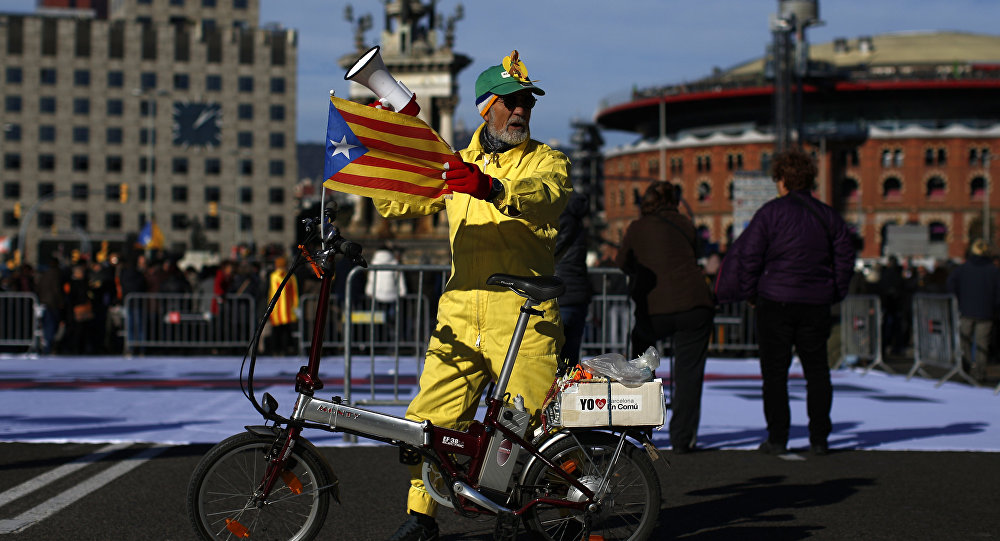 In a blow to Catalan independence, former leader Carles Puigdemont has pulled back from a bid for a second term in office, saying his withdrawal is the only way to get a new government underway. Sputnik spoke with Dr. Andrew Dowling, a senior lecturer in Hispanic Studies at Cardiff University about the situation in the region.

Sputnik: Was it ever even fathomable that Puigdemont run from Brussels or return to Spain to run?

Dr. Andrew Dowling: The Spanish government has been very clear throughout the past 2 months of stale mate. If the newly elected Catalan parliament does anything illegal it will continue to use this mechanism known at the 155, which is basically the suspension of the Catalan regional government.

Sputnik: But Article 155 never really appeared as ‘Nuclear’ as anticipated — why was that?

Dr. Andrew Dowling: They've partly gone through a moderate interpretation of 155. Yes, they sacked the Catalan government, but they actually removed very few public officials. The total number of sackings that the Madrid government imposed on Catalonia was about 40 people.

I think it's kind of shown that the tactics employed by Catalan independence over the past few years haven't really worked, Madrid has decapitated their leadership, and they're really floundering and trying to find a new way out. To try to devise a new strategy to cope with what Madrid is doing, and they haven't achieved that yet.

Sputnik: Would Jordi Sanchez be a good candidate to run, even from prison?

Dr. Andrew Dowling: Part of the thing that has been happening for the last few months, and part of the reason they are not having Puigdemont, but that they might elect Jordi Sanchez, is they are going to try to keep the Catalan question in the international media.

They want attention drawn, they want people to be looking at the Catalan question, or looking at Spain, and drawing negative conclusions. So, they hope that somehow international pressure can be applied on Madrid. That part of it is almost to draw the attention to Spain and Catalonia.

Sputnik: Is a stable regional government top priority for the region?

Dr. Andrew Dowling: One of the things that's happened since December, and it's kind of grown over the course of the autumn, is a split within the Catalan independence forces. You've got an increasingly hard line grouping, which is more or less congregated around Puigdemont.

Then you have other forces which want to be more pragmatic, continue to try to push for independence, but have a longer term goal and adopt a position closer to say the Scottish National Party, so what you've got is an internal dispute going on within the independence movement about whether to be hard line or whether to be pragmatic and moderate. Yesterday is the first indication that the hardline position was defeated, but it doesn't mean that the hardline position won't kind of resurface in the weeks and months to come.

Part of the reason why they were unable to achieve that, and why Puigdemont has stood aside is because the constant threat from Madrid, from the Spanish government, from the legal authorities that if you do anything that is beyond the bans of the authority of the parliament, we will re-suspend the parliament, take central control again. And that is why, the moderate faction with independence said 'We can't do anything that risks our institutions; we need to get our institutions back from control in Madrid, and embark a more long term project for independence.

Sputnik: What is the opinion of the Spanish state? Surely deferred leadership in Catalonia is for them, a relief, as it means a less stable basis for another bid for independence?

Dr. Andrew Dowling: The past three months have shown that Madrid holds a far higher number of levers of pressure and power than the Catalans have. In broad terms, you can say that the Catalan movement for independence has been defeated at the present time, now it doesn't mean that it won't bounce back, but it needs to find a coherent unified strategy. At this present time they are internally divided, so presently you can say ‘Victory for Madrid’.

The problem with that ‘Victory for Madrid’ position is also that there isn't really any indication that they are trying to come up with a meaningful political solution that can offer anything to those Catalans who have embraced independence.

Sputnik: Do you think the fact that the past government is all pretty much incarcerated/ exiled, does this make the job less appealing for others?

Dr. Andrew Dowling: Part of the reason why Puigdemont has been forced aside, is because the implications for people in the parliament in Barcelona was that if they proceeded they would run the risk of imprisonment for themselves. So, I think that there is no longer a sufficient number of individuals who are prepared to stand up and say, 'I'm ready to go to prison for this'- because it is clear that the imprisonment and the charges leveled can be really serious. Those currently in prison in Spain are facing the prospects if convicted of up to 30 years in prison for charges of Rebellion and Sedition.

The views and opinions expressed by Dr. Andrew Dowling are those of the analyst and do not necessarily reflect those of Sputnik.