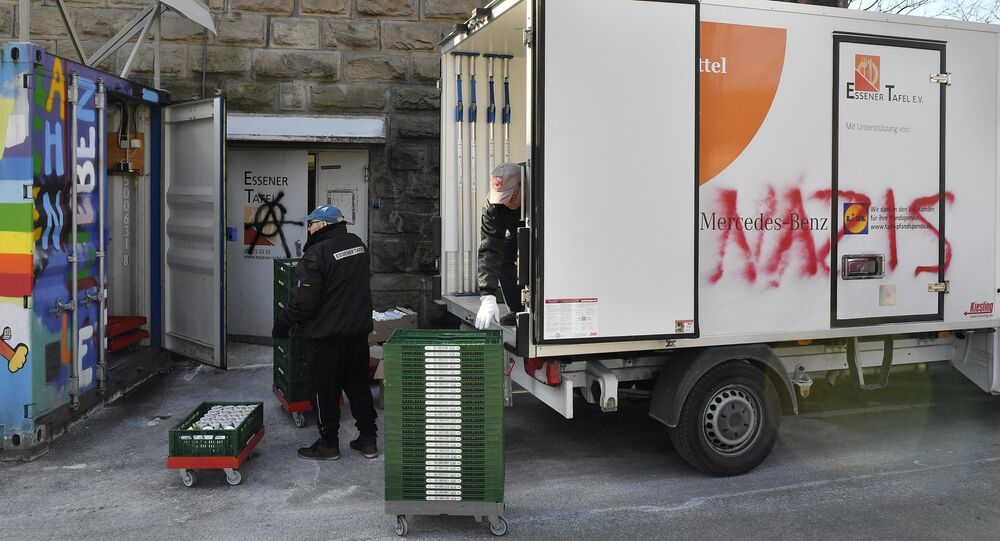 A non-profit food bank in Essen has been become embroiled in a xenophobia scandal after it refused to hand out new membership cards to foreigners because some elderly Germans feel uncomfortable with a large number of foreign men there. As a result, some parts of the company’s building and its delivery vans were vandalized with anti-Nazi graffiti.

The manager of the NGO, Jorg Sartor, stated that the bank would continue its regular operation and denies any allegations of racism. However, he expressed concern that volunteers would be discouraged to show up for the food distributions.

Sputnik discussed the public’s reaction to the Essen bank’s decision with Dr. Werner Patzelt, a leading expert on right-wing movements and political science professor at the Technical University in Dresden.

Sputnik: How adequate is the public reaction to the Essen food bank’s decision? Is it really about xenophobia or was the bank’s decision really necessitated?

Werner Patzelt: This reaction is out of any proportion and there are no serious and rational reasons for this reaction, because the only thing the food bank has decided is, that since so many foreigners come to the food bank, so many elderly Germans, in particular, feel unwelcome or feel set aside by the number of refugees, so it's not an act of racism, which is beneath the decision by the food bank, but simply the attempt to fulfill its mission, that is to be helpful to poor Germans.

Sputnik: The manager at the bank mounted concerns that the elderly Germans are becoming too frightened to participate in the program, why do you think the German people having to bear the brunt of this?

Werner Patzelt: They're simple facing the consequences of this huge amount of immigration we had in 2015-2016, which now changes the circumstances of everyday life of many Germans in many local German communities since this immigration was opted for and was supported by people who were driven by their ethical and the moral imperatives and not by practical considerations. Now in practice, it turns out what the enormous consequences, the side-effects, the unwelcome side effects of this policy have been, so it's simply Germany's rendez-vous with reality, which is expressed in this situation with the Essen food bank, and this will be only the first example of a number of examples in different fields of policies, which will become noticeable in the coming years.

Sputnik: What other complications have  occurred due to the mass introduction of migrants into Germany?

Werner Patzelt: First of all, there was a different feeling of security in public places, both on the  level of perception of reality and on the level of reality itself. We have an increase of insecurity in public places in Germany. We have seen a significant increase in foreign criminal acts of different kinds and this is not unfelt within the German population. Second, we see serious problems in the housing market, where rates are increasing for renting apartments and so on, because to house so many additional people in the country, of course, leads to shortages in the housing market. And third, which is not yet as apparent as a public discourse as it will be in two years from now, is that a large amount of the federal budget is spent on helping refugees for whatever reasons, and of course this money is not available for improving German public infrastructure, for paying for social security and so on, so we are at the beginning of a struggle over scarce resources, and this will change German domestic policies dramatically.

© AP Photo / Michael Probst
'Hijabs on the Brain': Activist Lashes Out Against Germany's Flawed Migration Policy
Sputnik: Why do non-governmental organizations have to deal with the migrant influx if they're initially established for the needs of German citizens? How do you assess governmental response to this issue?

Werner Patzelt: The government, without any doubt, imposed too heavy burdens on civil society; it's simply not sustainable to go on in a way in which we have handled immigration back in 2015-2016. Here an important difference between Germany and Great Britain and Sweden comes in, these countries are still used to defining national interests, while in Germany the whole notion of a national interest seems to be something which is not acceptable, because national interest sounds like nationalism, nationalism sounds like national socialism and therefore in German public discourse it is a matter of cause that welcoming refugees, being an open  country, is something like paying for the sins of the Nazi past, and therefore the German government didn't have any problem with imposing follow up problems of immigration onto a benevolent and willing German civil society. But now this overstretching of German resources becomes apparent, and I forsee heavy difficulties in our public political discourses. I forsee much more polarization in German society in the future years as consequences of this well-intended, but not so well-done immigration policy the German government  pursued a couple of years ago.

Sputnik: What's your assessment then of the overall sentiment in Germany now in view of the migrant crisis? How would things develop further on considering the political impasse in Germany at this situation?

Werner Patzelt: The general feeling is that the government has imposed a too heavy burden on German civil society. Most Germans want the government not only to change its immigration policies practically, which has been done in the past, but want it to admit that there have been wrong decisions in the past, that a wrong framework of priorities of loyal considerations over practical considerations has taken place, and Germans have voted for the right-wing populist parties in order to bring the established party system to policy changes. By the way, even a new coalition would lead a different immigration policy than the past one, but we are by far not at the end of this reorientation of German immigration politics. If the German government doesn't make it clear that there's a limit to immigration into Germany, that those not entitled to stay in Germany will be taken back to their countries of origin, then we will have an increase in right-wing populist movements in Germany and less government stability than we've seen in the past.

The views and opinions expressed by Werner Patzelt are those of the speaker and do not necessarily reflect those of Sputnik.