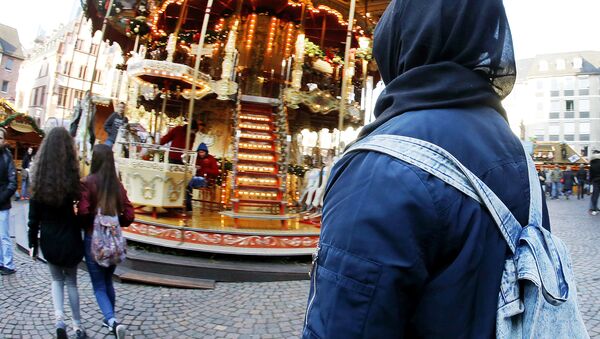 Rebecca Sommer, a rights activist who once actively supported Berlin's refugee policy, has become its passionate opponent, recently saying that it may be "too late" to save Germany from uncontrolled immigration from Muslim-majority countries. Speaking to Sputnik, Sommer outlined who is responsible for the misfortune afflicting her country.

Sommer, the director and founder of Flight and Human Rights, a Berlin-based center assisting refugees, made headlines in Polish and German media recently following an interview with Polish newspaper Do Rzeczy, where she intensely criticized German and EU immigration policy.

In a new interview for Sputnik Deutschland, Ms. Sommer offered more details regarding her position, saying, for example, that she was firmly opposed to the imposition of refugee quotas by Brussels. "Every country and every people has a right to independently choose its guests. No country should give up its right to self-determination," she stressed.

Sommer added that she believes that European policy seems to be dominated by elements seeking to create 'One Europe', an amorphous entity which has no respect for individual nations. "No nation, no group –not the Italians, nor the French, the Germans or the Poles will be able to survive as a nation unless they defend their interests in a reasonable way," she noted.

Sweden Refusing New Study of Migrant Crime Despite Alarming Figures From Norway
According to the activist, there are many people from Muslim-majority countries who need assistance, including Christians and other minorities who are willing and able to integrate, and to accept the German system of values. This list also includes people with a non-traditional sexual orientation who may be fearful of the growing Islamization of their countries, or women who have fled their country for so-called 'honor crimes'.

"These people need to stay here," Sommer stressed. "But these people also want to and are trying to integrate, and are not trying to create a so-called 'parallel society' here," she added.

In Sommer's view, Germany should adopt new laws before continuing to arbitrarily let in more refugees without any checks. It's wrong, she noted, "when refugees deliberately throw away their passports, but still get the right to stay here. Or take, for example, the subject of age. Our parties get outraged and say that this contradicts international law. In such cases I can only think 'Are you crazy?'"

Asked why, more than anywhere else, refugees seem so eager to come to Germany, Sommer emphasized that for many, it is a chance to take advantage of the country's generous welfare system. In Germany, she noted, "they can very quickly get apartments, and large families even houses. And because they can get many other things for free, like music or sports programs, an education – everything is paid for for refugees. Much has been said about the Hartz IV [welfare] benefits; for many it's a good thing, especially if they have families. They receive a lot of money for every child that they have, and therefore do not even have to work."

"I would like to emphasize that there are many refugees who really are looking for work, and who want to integrate into our society, including through work," the volunteer said. "But the majority came here not because they like our democracy or our weather, or because they like us Germans so much," she lamented.

German Government to Freeze Talks on Turkey’s EU Accession Until Conditions Met
Sommer's organization works across Berlin, and among the group's clients many friendly relationships are formed, especially with refugees making an effort to integrate. She admitted, however, that there are also refugees she's worked with who disappointed her, "because they do not want to become socially independent, and I can see how they pass this attitude to their children over the years."

Not Populism, But Common Sense

Asked whether her anti-open door immigration attitudes make her a right-wing populist, the activist stressed that this was not the case.

"I continue to work with refugees. I have Muslim friends, but they are secular Muslims who became Germans a long time ago. My critical position is aimed, first and foremost, at the theme of integration. After all, if someone works here and speaks our language, it does not mean that they are really integrated. I believe that it is good to keep your own identity and culture. But not at our expense, not by despising us or considering us 'infidels' who should be converted to Islam," the activist stressed.

Almost 100 Attacks Against Christians Registered in Germany in 2017 - Report
According to Sommer, "many refugees come to Germany with 'hijabs on the brain'; they are obsessed with these ideas. Not a day goes by when I do not talk to refugees about the Koran, and I'm beginning to think that it's not us discriminating against refugees, but the other way around. And this bothers me. I come across this every day, and it repeats day in and day out. They are convinced that evolution does not exist, because nothing is written about it in the Koran. And think that women must be subordinate to men."

Sommer stressed that she would continue her work. "I love people, including refugees. Yes, I will continue with my work, but will be more careful. I'm looking carefully at whom I help. I am the head of the Flight and Human Rights group, and coordinate with German teachers. It's very important that we continue this work. Because if these people are left alone with their problems, they will continue to create their own 'parallel societies'. There are a lot of refugees who really need our help, and who really are trying to integrate into our society."