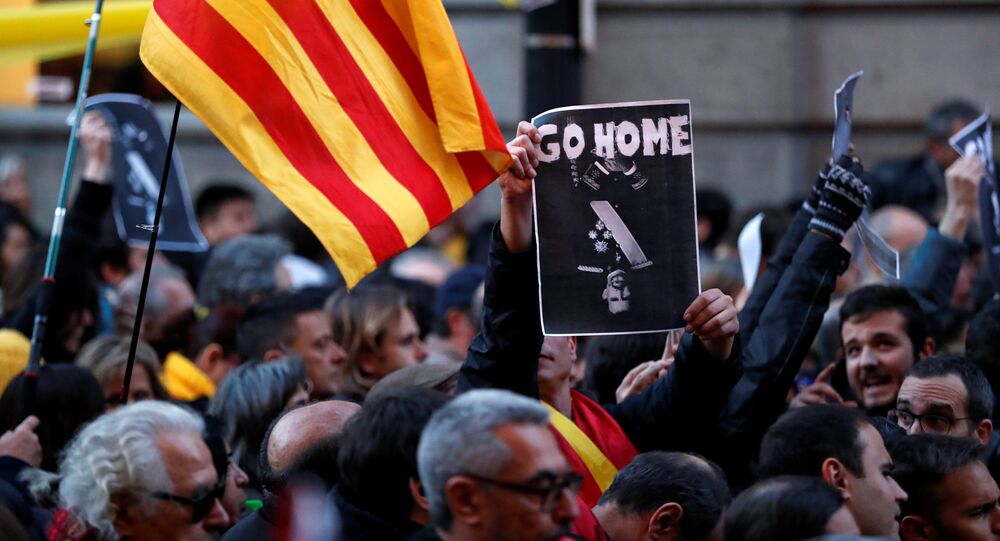 There's a 'Desire for Change in Spain; Monarchy Shouldn't be Celebrated'- Expert

The Spanish Monarch arrived in Barcelona to a crowd of people jeering his arrival. It’s the first time that King Felipe VI has visited Catalonia since the disputed referendum last October. Sputnik spoke with Jaume Lopez Hernandez, lecturer of political science at the University of Pompeu Fabra, about the recurring tensions in the region.

Sputnik: Why did the King's arrival in Catalonia spark such a reaction?

I think it's bigger than that; it's wider than the support for independence. I would say that this disaffection is caused by the King's answer to the referendum last October. In the speech he made there was no consideration for the violence, not even a sympathetic perspective towards the Catalans that endured this police violence. Whether illegal or not, this lack of empathy is something that has forged a big change in the Catalan society and this is not going to change.

© REUTERS / Sergio Perez
It is Unlikely Catalonia Will Become Independent in Near Future - Lecturer
Now the idea of independence goes together with the idea of a Republic, in many cases. For many people, independence was connected with nationality. You could have considered that independence was connected with a national feeling, but now it is also the desire for a Republic. It is the desire for Spain to change, and that the monarchy should not be celebrated.

It is something that is going to play a big role in the politics of Catalonia. Yesterday's demonstration against the King's arrival is perhaps the first evidence of this, where you could connect those that are pro-Republic, against the monarchy, and the people who are pro-independence, who want a new state.

Sputnik: Is the will for independence still going strong, even without Puigdemont in the Region?

Jaume Lopez-Hernandez: The tensions are going to continue. Not in a violent way of course, but all the organizations that organized the rallies and demonstrations of the last year are going to continue. Making different collective actions, in order to protest and demand a legal referendum. In this sense, nothing is going to change over the next months, and even years.

Sometimes, this movement has been interpreted as something that comes from the top, and trickles down- that it's generated by political parties, or even the government. It's the other way round. It was the popular movement that started to descend from the right to decide. This popular movement is very well organized, it's stronger than before, because the National Assembly, and the Omnium Cultural we have a new organization to add, which is the committee for the Defense of the Republic, which has a popular network organized on local levels, that also have their political role. They were the ones to organize the protest while the King of Spain arrived in Barcelona. We have new actors, and they are not ruled by political parties or governments- they are social movements.

© Sputnik / Javier Luengo
Left-Wing Catalan Party Vows to Pursue Catalonia's Independence After Elections
Sputnik: Do you think it's likely that these 'political prisoners' will be released anytime soon?

Jaume Lopez-Hernandez: They are in provisional prison, waiting for trial. It's the first time that people have been charged for sedition and rebellion, so we don't know what is going to happen. There is no previous experience to compare it to. They could be in prison for three years before the trial. So far it seems like they are imprisoned more for political reasons rather than strict legal reasons. If this is so, then it's difficult to expect them to be released from prison. In Catalonia, and especially for the people who are supporting the pro-independence movement, they don't expect to see any change; they expect them to be held for years.

The views and opinions expressed by Jaume Lopez-Hernandez do not necessarily reflect those of Sputnik.